Portrait of the Zamojre family. 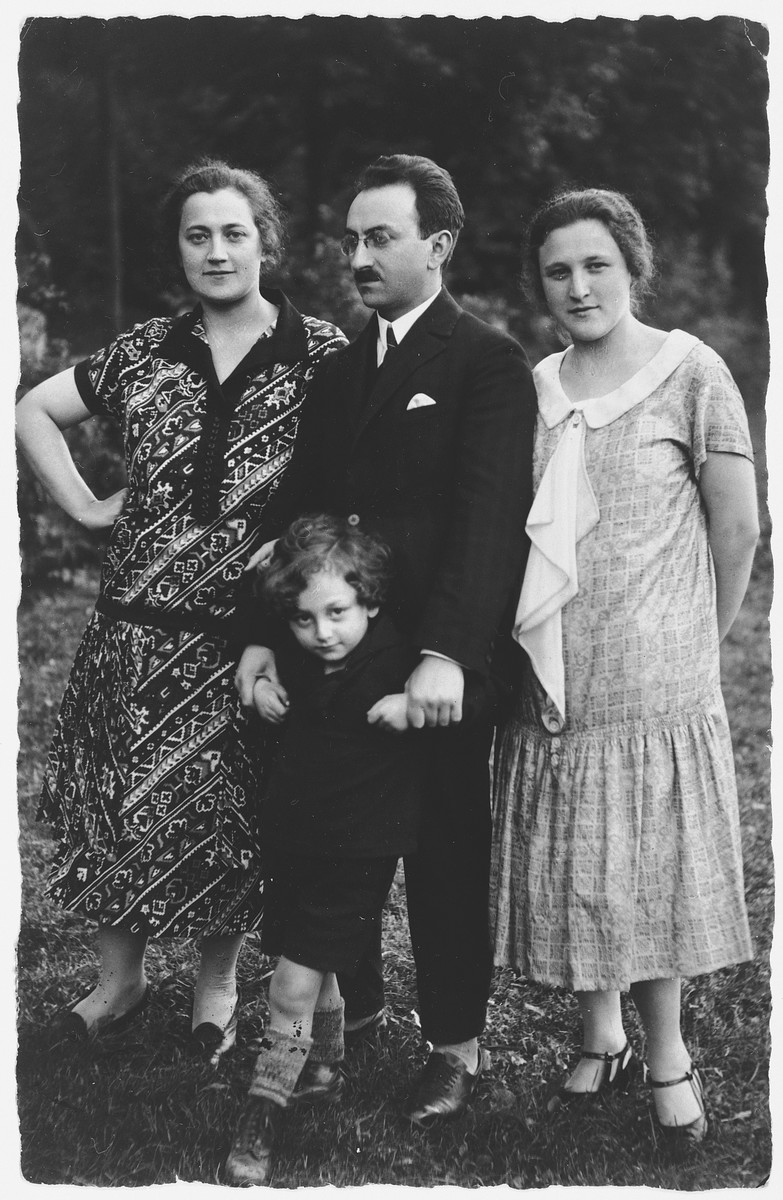 Portrait of the Zamojre family.

Pictured from left to right are Elinor Zamojre, Markus Zamojre with his son Joseph, and Miriam Wiesenthal (Elinor's sister).

Biography
Joseph Zamora (born Joseph Zamojre) is son of Elinor and Markus Zamora. He was born on June 28, 1921 in Greiz and grew up in Frankfurt, where his father owned a tobacco shop. Joseph attended public school until 1935 and he transferred to the Jewish Philanthropin Reformgymnasium. The school's principal hired teachers from England who taught the students English to facilitate their eventual emigration. The students received diplomas from the Cambridge Senior School, a preparatory school for Cambridge University. During Kristallnacht, November 1938, SA men entered the Zamojre house, vandalized it, and beat Markus with a table leg, resulting in his hospitalization for a few days. A few days later, on November 22, German police rounded up Joseph along with other young men. The SS beat the men and forced them to roll on ground. However, when they learned that Joseph was only seventeen years old, they permitted him to return home. The family wanted to leave Germany but had no immigration visas. For a while, Joseph joined a Zionist Hachshara to prepare for agricultural life in Palestine. In late 1940 Joseph and his father heard that it was possible to illegally immigrate to Palestine from Yugoslavia. They left Frankfurt in mid-December 1940 and crossed over the Alps. Elinor, who felt she was not physically able to cross the mountains, remained behind with the intention of joining her husband and son later. After encountering difficulties trying to cross the border, Joseph and Markus eventually made their way to Zagreb and connected with a group of young people preparing to immigrate to Palestine. However, because of limited space, they could not join the next transport. Then, in April 1941 Germany invaded Yugoslavia, putting an end to their plans. Joseph and Markus fled to Ljubljana in the Italian zone with group of 40 of 50 mostly young people. Markus and the other adults stayed in Ljubljana and Joseph and the youth were put up in a nearby manor house. The refugees received support from DELASEM (Delegazione Assistenza Emigrati). As partisan activity intensified in the region, the Italians became more wary of the refugees. Markus received a letter in November 1941 ordering him to report to Rovigo near Ferrara. Joseph left his friends to accompany his father. After arriving in the Italian interior, the police registered them as civil internees in the town of Ficarolo. The Italians provided them with lodging, ration coupons, and free movies. All this time, Joseph and Markus managed to exchange infrequent letters with Elinor. Her last letter arrived in 1942 when she wrote that she was about to be deported to Lodz. In early 1943, the police moved Markus and Joseph to Taglio, which coincidentally was near Nonantola, the town where the other young refugees from Ljubljana were now living and had formed a new Kibbutz Hachshara. Joseph was able to visit them once. Joseph's life, however, took a dramatic turn for the worse following Italy's capitulation in September 1943. Though the Allies had liberated southern Italy, Germany responded by occupying Northern Italy and concomitantly, rounding-up and deporting Italian Jews. Joseph and Markus went into hiding with some Italian fishermen in the Po Valley. In April 1944 they were discovered, arrested, sent to the Fossoli transit camp, and then placed on a transport. After an eight-day train ride, they arrived in Auschwitz. Initially, Markus and Joseph were sent to work in the Kanada commando sorting and disposing of the baggage of the new arrivals. Occasionally they found food packages which provided them with a source of extra nutriment. (Markus made a point of keeping kosher and Jewish holidays to the best of his ability even while in Auschwitz.) However, by the end of the summer, they were moved to a different worksite. In October 1944, after members of the Sonderkommando blew up one of the crematoria, the Germans decided to move able-bodied young men out of Birkenau. For the first time, Joseph became separated from his father. He never saw him again. Joseph was marched to the sub-camp, Buna, to do construction work outside the IG Farben plant. He was injured while at work, but saved thanks to the assistance of a Jewish doctor who operated on his foot. On January 18, 1945, the Germans evacuated the camp in advance of the Soviet army. Joseph and other inmates were forced on to a death march. After escaping the march, Joseph found shelter with a sympathetic farmer. From there he made his way south traveling to Krakow and later to Slovakia, Budapest, Yugoslavia, and Italy in the unfulfilled hope of finding his father. When he arrived in Rome, Joseph managed to contact an aunt and uncle who had immigrated to America before the war. They sponsored his immigration, and in February 1947 Joseph sailed to New York. He later studied chemistry at Columbia University and married Gisela Eckstein on August 18, 1952.