Certificate issued by Alfred Rossner, the owner of clothing workshops, stating that the sewing machine located in the apartment of Luba Prawer has been reserved for use by the Rossner workshops. 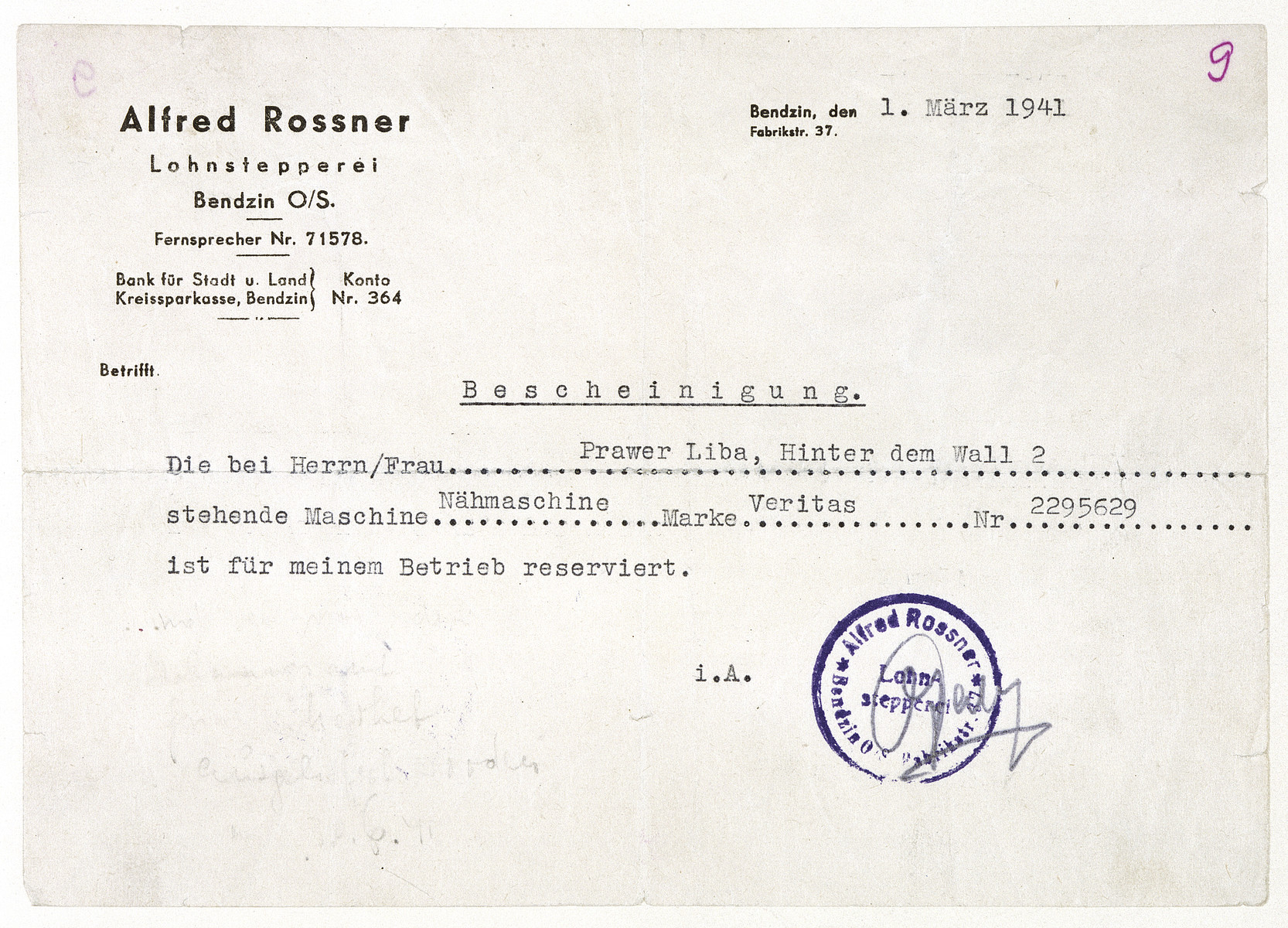 Certificate issued by Alfred Rossner, the owner of clothing workshops, stating that the sewing machine located in the apartment of Luba Prawer has been reserved for use by the Rossner workshops.

Biography
Eugenia Genia Pinski (born Eugenia Prawer) was the only daughter of Israel Arie Prawer and Luba Bendetowicz Prawer. Eugenia was born on November 25, 1925 in Bedzin, Poland where her father owned a mill and worked as an accountant, and her mother worked as a bookkeeper. The family was quite prosperous, and Genia attended the Furstenberg Jewish gymnasium. Luba Bendetowicz moved with her family to Bedzin from Minsk, Byelorussia, and she married Israel in 1925. Tragically he died ten years later during surgery. In September 1939 after the German invasion, Luba Prawer sent her daughter, Genia, to Warsaw to stay with the family of her brother, Mietek Bendetowicz. After two months, Genia returned to Bedzin, but meanwhile the Germans had confiscated their apartment. Genia and her mother moved in with Luba's parents, Mosze and Chana Bendetowicz. Luba began to work as an accountant in the Braune's shoe workshop, which gave her an official work permit. Genia and her friends continued their education clandestinely, completing high school in 1941. Genia also started to work for the Braune workshops in Dabrowa Gornicza. At the same time, she joined the Zionist youth organization, Hashomer Hatzair. In spite of having valid work permits, the Jewish police arrested Genia, her mother, and her cousins, Genia and Marek Prawer, and imprisoned them in Zwischenlager jail in Sosnowiec as hostages destined to be deported to Auschwitz. Rudolf Braune managed to release all four of them. The following year during the summer of 1942, the Germans began an intensive deportation Aktion in Bedzin. In January 1943, the remaining Jews of the Bedzin ghetto were relocated to Srodula and Kamionka. Luba heard that it was possible to obtain Honduran passports. She mailed photographs of herself and Genia to Switzerland and they received the desired passports a short while later. The effect, however, was exactly the opposite of what she had hoped. The Jewish Council reacted by putting both women on a deportation list. Luba was protected by her position in the Braune workshop while Genia hid in an attic. Mrs. Baranska, a Polish friend of Luba's, supplied Genia with the identification papers of Maria Zenderowska. Using these papers Genia was sent as a Polish forced laborer to a farm in Eisleben, Germany in May 1943. The German supervisor, Mr. Krall, arranged for her to have a somewhat easier job performing housework and taking care of the chickens. In the summer of 1943, Genia had an opportunity to telephone the Bedzin ghetto and upon hearing the news about its liquidation, she became very depressed. Mr. Krall realized that Genia was not a Polish peasant and brought her to another farm. At the same time, Luba Prawer became caught in the midst of the brutal ghetto liquidation. She hid for a few days in a makeshift bunker only to be taken to the deportation point with thousands of other Bedzin Jews. Luba escaped by pretending to be a nurse. She hid with five other Jews in a neighboring barrack which served as a warehouse for stolen Jewish property for a few days without either food or drink. With the help from her boss, Rudolf Braune, Luba eventually managed to escape. Though without identification papers, she came to Germany and found her daughter. Genia arranged a place for her with the help of Mr. Krall. Luba Prawer assumed the identity of Julia Domagala, another Polish forced laborer. In April 1945, an American tank drove into the village of Steinbrueck and liberated Genia and Luba. Genia gave her small gold ring to the American soldier as an expression of gratitude and in exchange received a silver cross with an American flag on it. In September 1945, Genia married Marian Pinski who she met in Goettingen. Marian had been imprisoned as a Polish POW in the vicinity of Steinbrueck. They both attended medical school in Goettingen Germany and eventually settled in Szczecin.