Jewish children in hiding study in a classroom of the children's home in Sevres. 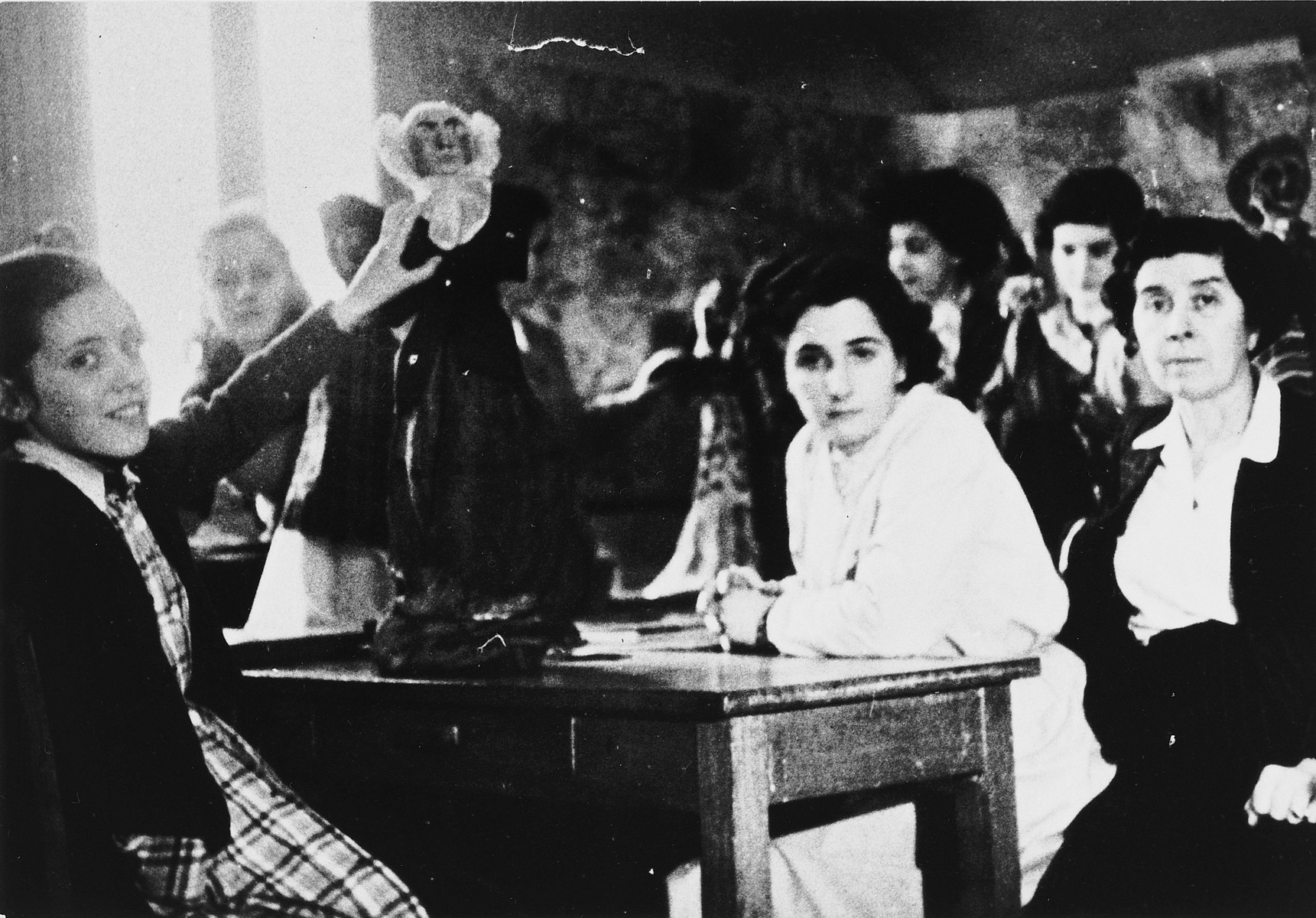 Jewish children in hiding study in a classroom of the children's home in Sevres.

Pictured on the far right is Mme. Yvonne Haguenauer, the director of the home.

Biography
Alice Berney (born Alice Menkes) is the daughter of Leopold Menkes and Rebeka Adler Menkes. She was born on June 7, 1929 in Vienna, Austria where her father was an attorney. She had one older brother, Herbert, born in 1925. Alice first became aware of the changing European political situation in late 1937 when cousins of her mother fled Germany and temporarily stayed with them in in Vienna until they found a permanent refuge. Half a year later, Alice's family found themselves in the same situation following the German annexation of Austria on March 11, 1938. Almost immediately two plainclothes policemen arrested Alice's father, Leopold Menkes, despite the fact that he was a partially disabled veteran. A few minutes later, other men came to their apartment and told Rebeka that she and the children had to vacate the premises and move in with another Jewish tenant. She appealed to the building's Nazi concierge who told her to ignore the order, and they remained in their home. Four days later Leopold was released from custody, but as a Jew he was prohibited from practicing law. About a month later Alice and other Jewish classmates were expelled from school. Alice's parents immediately began searching for ways to leave Austria. When they could not obtain visas for the entire family, they decided to send Herbert and Alice on a Kindertransport to France in the hope that they would be able to illegally cross into France, rendezvous with the children and immigrate to the United States as a family. On March 23, 1939 Alice and Herbert left Austria confident that they would see their parents soon. They were sent to La Guette, a mansion owned by the Rothschilds near Paris, that was being used as a children's home. At the beginning of the school year Herbert and some other boys were sent to a boarding school in Clamart, and Alice only saw him once during the next year and a half. After the German invasion of France in May 1940, the children of La Guette were evacuated to La Bourboule, a former spa in the Massif Central. La Bourboule was located in the Free Zone, but Herbert's school was in the Occupied Zone. Alice and Herbert could correspond only on occasion, so she was delighted when her brother and the other boys suddenly arrived at La Bourboule on January 3, 1941. Six months later the OSE sent him and eleven other boys to a technical school in Brive. Alice never saw him again. Thirteen months later Herbert and five other boys over the age of sixteen were rounded up and deported. Herbert perished in Auschwitz in 1942 at the age of seventeen. In late 1941 the OSE decided to disband La Guette and transferred most of the girls to a religious home, Le Couret. Alice remained there for approximately two years. During the summer of 1943 the girls prepared to go into hiding. They had to leave behind anything that disclosed their real identities (such as inscribed photographs) and were told they could retrieve their belongings after the war. In February 1944 Alice was given a new name and identification card and was sent to a children's home sponsored by Marshall Petain in Sevres, a suburb of Paris. Alice later learned that 30 Jewish children and two teachers, including Marcel Marceau, were also hiding there. After the war ended, Alice went to Hirondelle, a children's home in Lyon, to await the return of her family. Unfortunately none of them came back. Her parents had been transported to Theresienstadt and then to Auschwitz where they perished in November 1944. Alice remained in Lyon until June 1946 when she joined her mother's sister and her husband in the United States, sailing on the Athos II from Marseilles. Alice Menkes married Arthur Berney on January 3, 1954.