Group portrait of the Teheran children posing under a Hebrew welcome banner after their arrival in Palestine. 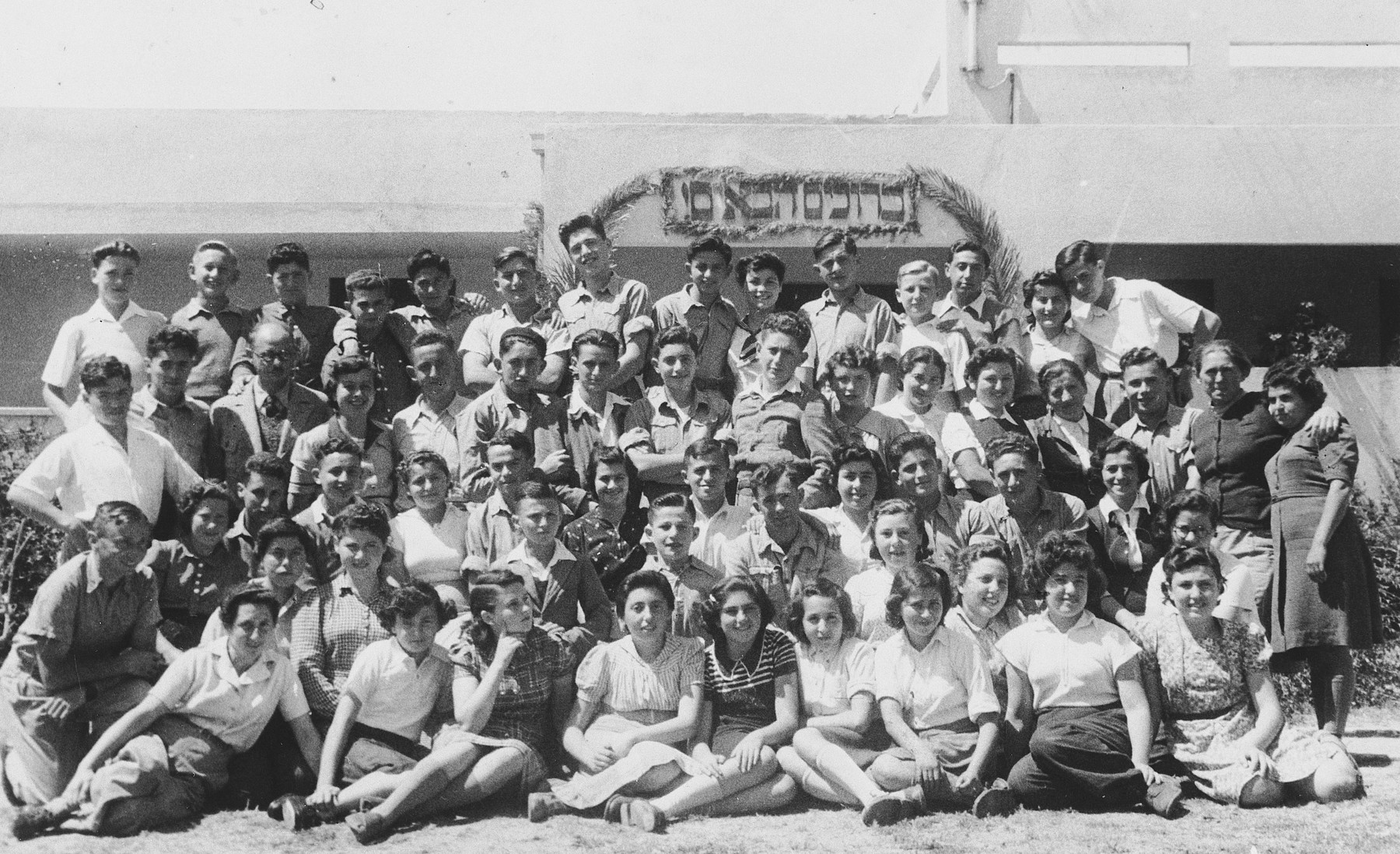 Group portrait of the Teheran children posing under a Hebrew welcome banner after their arrival in Palestine.

https://www.ushmm.org/wlc/en/article.php?ModuleId=10007498.
Biography
Gabriella Alter (born Gabrila Knoebel) is the youngest daughter of Yehuda and Zlata (later Zahava) Knoebel. She was born on June 6, 1929 in Nowy Sacz Poland. Gabrila had two sisters: Ruta was born in 1921 and Shulamit was born in 1925. Yehuda was raised in a religious home in a semi-rural village, and Zlata grew up in a wealthy, assimilated home in Przemysl. The Knoebels were quite prosperous and engaged in many philanthropic works. Gabrila's father manufactured jam, and her mother managed a family-owned hotel where she also ran a restaurant for the village poor who otherwise could not afford to eat. Gabrila's parents traveled frequently, especially to Romania and Hungary to purchase fruit. The family was staunchly Zionistic. The children attended Safa Brura, a school whose language of instruction was exclusively Hebrew, and Zahava headed the local branch of WIZO. In this capacity she visited Palestine several times. Yehuda purchased a plot of land in Tel Aviv and obtained legal certificates for the family to immigrate to Palestine. However, World War II began before they were able to leave Poland. After the start of the war, the family fled east to the home of an uncle who lived in small village outside of Lvov. One day, Zlata Knoebel was bitten by a dog while fetching water. The family left the village for Lvov so that she could receive treatment for her wound. While the family was there, the Soviets rounded them up along with other Polish refugees and transported them to Siberia. After a ten-day train ride, they arrived in Irkutz. From there, they were taken by truck to a small village, where her father was put to work collecting lumber. The authorities eventually learned that Yehuda Knoebel was knowledgeable in the manufacture of jam, and they moved the family to the neighboring town where he could use his expertise. There, the family lived in an apartment, had plenty to eat, and the girls were allowed to attend school. However, following the June 1941 German invasion of the Soviet Union, the Knoebels were sent back to the lumber villag, until the Soviets granted the Jewish deportees amnesty the following year and permission to leave Siberia. The Knoebel family traveled south in the hope of eventually reaching Palestine, but they only got as far as Samarkand in Uzbekistan. There, for the first time since leaving Poland, they experienced hunger. Furthermore, a deadly typhus epidemic broke out, claiming entire families. Friends of the Knoebels died leaving behind two children. At first the two orphans lived with Gabrila's family, but after Zlata learned that a transport was being formed to take orphans to Palestine, she enrolled the children in the transport along with her own daughter, Gabrila. The children were brought to Palestine via Teheran, Karachi and Suez and arrived on February 18, 1943. Gabrila settled in Kibbutz Givat Brenner. Her parents and older sisters remained temporarily in Samarkand. After the war, they returned to Poland. Yehuda and Zlata still possessed valid certificates to Palestine for themselves and Shulamit. They immigrated to Palestine legally in 1946. However, since Ruta was over 18, she needed her own certificate. She immigrated shortly thereafter as a counselor for Youth Aliya. Unfortunately Gabrila's mother passed away suddenly soon after arriving in Palestine. In 1950 Gabrila married Natan Alter.