Group portrait Jewish teenage girls clad in nurses uniforms in the Limoges Pouponierre where they were assisting in the care of young children. 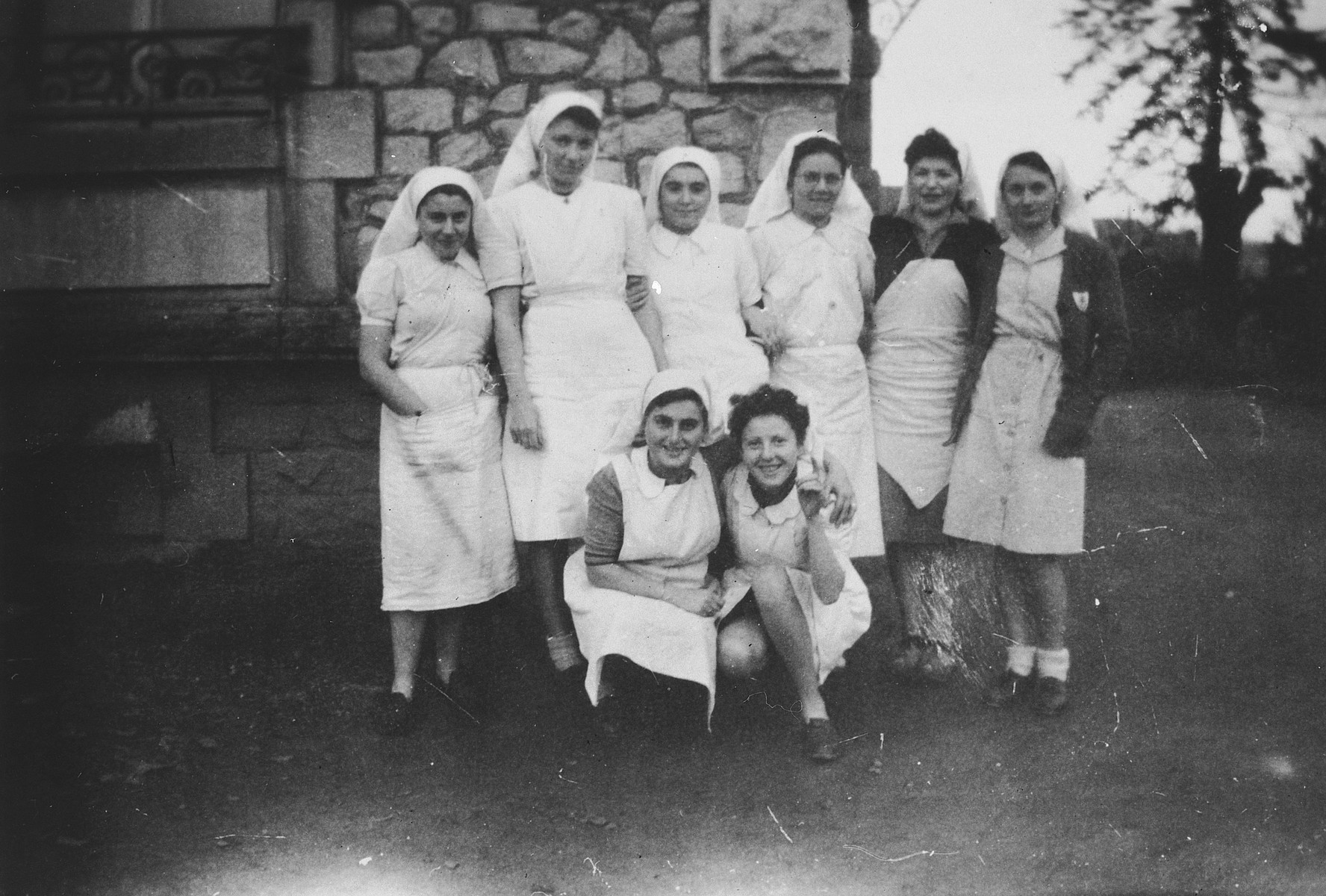 Group portrait Jewish teenage girls clad in nurses uniforms in the Limoges Pouponierre where they were assisting in the care of young children.

Among those pictured are Ruth Strauss.

Event History
The Pouponniere in Limoges opened in late 1940 by the Assistance Medicale aux Enfants de Refugies (Medical Aid for Refugees' Children), with financial help from the Joint Distribution Committee. It was designed for children ages 0-6, though most of the children were under three. In March 1942, the home was transferred to the auspises of OSE and was an annex to a school for nursing. The home closed in 1943.
Biography
Ruth Schloss (born Ruth Strauss) is the daughter of Julius and Mathilde (nee Moses) Strauss. She was born on September 14, 1926 in Hoeheinod Germany and grew up in Waldfischbach, where her father worked as an accountant and bookkeeper. Her father was born on November 24th, 1899, and her mother was born in Glan/Muenchweiler on February 6, 1895. As there were only two Jewish families in Waldfischbach, they attended the reformed synagogue in Rodalben. Ruth attended public school until 1937 when she expelled on account of being Jewish. Afterwards she was tutored at home, and received Hebrew lessons from her father's cousin. Her father, Julius Strauss, lost his jobs as a result of the anti-Jewish laws and Ruth suffered other torments. People threw stones at her, pushed and hit her in the streets and had their dogs chase her. Her former school friends refused to associate with her. Julius Strauss, who was active in the Jewish communities in Kaiserslautern and Pirmasens, arranged for Ruth and her cousin Edith Moses to go on a Kindertransport to France. They arrived in Montmorency on March 8, 1939 and then spent a few days in the Rothschild hospital in Paris. From there, they were then sent to Chateau de la Guette located on the Rothschild estate. After the German invasion of France, La Guette was evacuated, and Ruth moved to le Couret, another children's home. She only spent a short period of time there before leaving for Vic-sur-Cere where she remained until the beginning of 1942. Meanwhile, on October 22, 1940, the German authorities rounded up Ruth's parents, along with some 7500 Jews from the Saar, Palintinate and Baden, and deported them to the Gurs concentration camp in southern France. Since Ruth's father spoke some French, each day he was brought from Gurs to Lagney for forced labor. He managed to visit Ruth while she was in Le Couret, and one afternoon at the end of 1941 Ruth succeeded in visiting her parents in the camp de Gurs. During 1942 Germany began large-scale round-ups and deportations of Jews from France. Ruth's' parents were both sent to Drancy and in early September 1942 placed on convoys to Auschwitz where they perished. Ruth left Vic-sur-Cere with 23 other children to go into hiding in the woods during the summertime for several weeks. They survived in small groups by stealing food that was meant for the pigs and eating raw meat from a dead horse they had found. Afterwards she was hidden in a convent by the nuns of St. Joseph near Limoges; only the Mother Superior knew she was Jewish. When the situation became even more dangerous, Ruth hid in an insane asylum for a few weeks and returned to the woods for a few more days. While in the woods, Ruth met Mrs. Rose, a member of the French underground. Mrs. Rose gaver her a false identification card under the name of Yvonne Sapin, and in 1943 she escorted Ruth and two other children to the Swiss border. Ruth was caught at the French border and sent to the Rivesaltes internment camp. At the train station, by coincidence she met a young man. Unbeknownst to Ruth, he was working for Abbe Glasberg, a Russian Jew who had converted to Catholicism during the 1930s. During the war Glasberg used his position with the Lyon diocese to rescue Jewish children from the concentration camps in southern France. The young man removed four children from Rivesaltes, including Ruth, and brought her to Limoges where she worked in a Pouponnierre, a home for small children. Ruth remained there for almost a year but spent the final months of the war hiding in a convent. After the war Ruth went to the Feynerols children's home to recuperate. She then lived in another children's home, Moissac, before immigrating to the United States in August 1947 sponsored by a cousin of her father. In January 28, 1950 Ruth married Ralph Schloss, and they have two children.