Group portrait of an elementary school class in Buzancais, France that included a Jewish child in hiding. 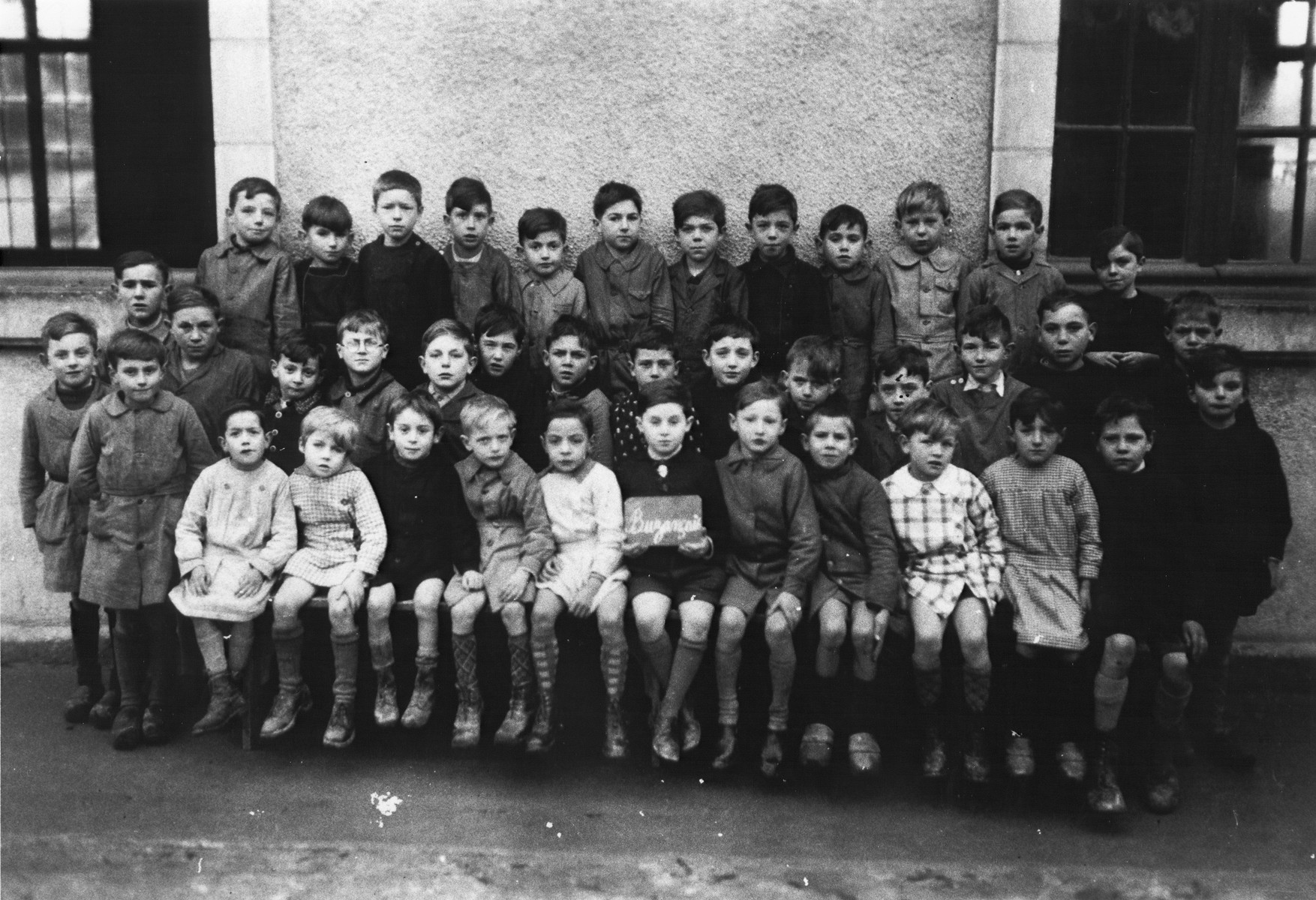 Group portrait of an elementary school class in Buzancais, France that included a Jewish child in hiding.

Herbert Odenheimer is pictured in the front row holding a sign with the name of the town.

Biography
Ehud Loeb (born Herbert Josef Odenheimer) is the only child of Hugo (b. 3/12/1899) Odenheimer and Julchen Schweizer Odenheimer (b. July 31, 1901). He was born on March 26, 1934 in Buehl, Germany where his father became a partner in his father-in-law's successful printing press and stationary store. The family was observant, attended synagogue and kept a kosher home. On the night of Kristallnacht, November 9, 1938, Herbert accompanied his father as he watched their synagogue burning. On October 22, 1940 the Jews of the Saar, Palatinate, and Baden were taken from their homes and brought by police vehicles to special trains that transported them to the Gurs internment camp in southern France. Those deported included Herbert, his parents, and his grandmother, Sophie Schweizer. His maternal grandfather had died a short time before. When they arrived at the camp, the guards separated the men from the women and children. Herbert never saw his father again. Herbert's grandmother died a few weeks later in the camp. At the end of February, 1941, through the work of the OSE, the Eclaireuers Israelite and the Quakers, Herbert was taken out of Gurs and brought to the children's home of Chabannes. He never saw his mother again. After the French police raided Chabannes in late August 1942 and arrested some of the older children, the OSE began dispersing the children. Pierette Poitier, a Christian woman working on behalf of OSE, brought Herbert to live with a carpenter and his wife in Buzancais, in the department of Indre. The couple treated Herbert very poorly and the carpenter beat him if he did not perform his chores adequately. When Madame Poitier visited Herbert one month later, she assessed the situation and immediately removed Herbert from their care. She brought him to the home of Jeanne and Jules Roger, who lived in the same town. Jeanne's brother, the police commissioner in Lyon, was active in the resistance and issued false papers to Jews. He was later captured, tortured and died in Buchenwald in March 1944. Ehud became quite close to the Roger family, and they treated him as a loving aunt and uncle. However, Ehud did not remain there too long and was sent to other OSE homes including Montintin. He also hid in a hospital in Limoges using the name of Hubert Odet. After the liberation of France he returned to the children's home of Montintin and waited for his parents to return. Unfortunately his parents had been deported from Gurs to Drancy. His father was on Transport #29 from Drancy to Auschwitz on September 7, 1942, and his mother was sent on Transport #28 on September 4, 1942. Julchen's aunt, Erna Schweizer Arnstein, her husband and unborn child were deported to Riga where they perished, probably in 1941. After learning that his parents had perished, Ehud returned to the Roger family where he remained until January 1946 when he learned that the Loebs, who were distant relatives on his mother's side in Switzerland wanted to adopt him. Ehud went to Switzerland and lived with the Loebs as their son for the next twelve years until he immigrated to Israel in 1958 on the Theodore Herzl ship. In 1960 he married Shoshanna Spiro. By coincidence, Rabbi Leon Ansnbacher, who had served as the rabbi of Gurs, performed the marriage. In 1989 Yad Vashem recognized Jeanne and Jules Roger and Pierette Poitier as Righteous Among the Nations.