Group portrait of friends and relatives who are celebrating the marriage of Lily Fischel and Leon Pancis in the Bad Wildungen displaced persons' camp. 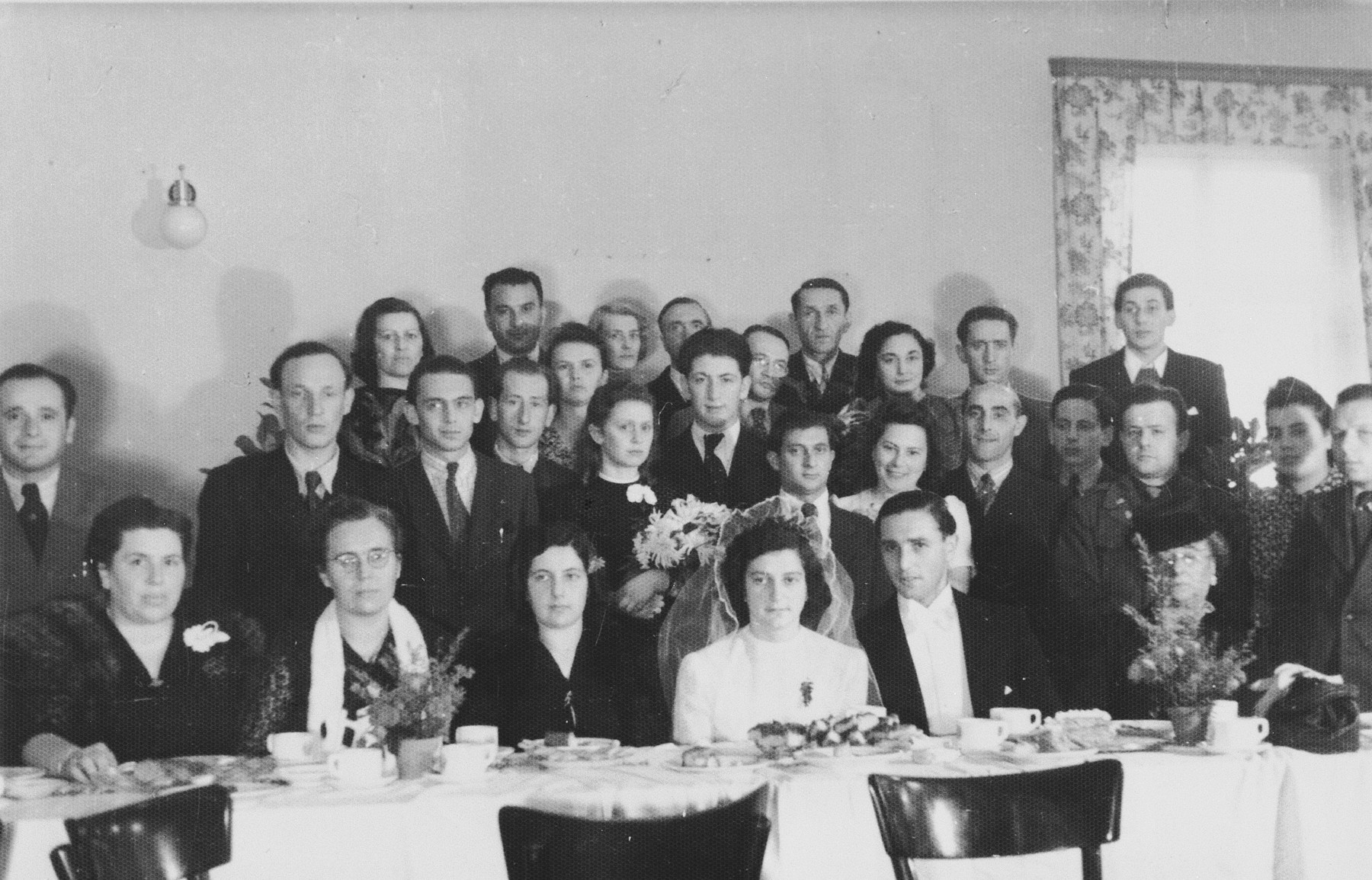 Group portrait of friends and relatives who are celebrating the marriage of Lily Fischel and Leon Pancis in the Bad Wildungen displaced persons' camp.

The bride and groom met each other in concentration camp. Ludwig Fischel, a cousin of the bride, is pictured on the right with a flower on his suit.

Biography
Ludwig Fischel is the son of Siegfried Fischel and Mathilde Eldodt Fischel. He was born on April 18, 1928 in the town of Rimbeck Germany, where his father and mother operated an appliance and hardware store. Ludwig had a large extended family; Siegfried Fischel (b. July 14, 1886), was one of ten children, and Mathilde Eldodt (b. October 27, 1894) was one of seven children. Ludwig had a brother named Walter (b. August 16, 1921) and a sister named Inge (b. April 5, 1925). The Fischels were religious Jews who kept kosher and observed Shabbat. In 1934, Ludwig entered public school, but as the years passed his non-Jewish schoolmates stopped playing with him. On the night of Kristallnacht, November 9, 1938, Ludwig's synagogue was destroyed. The next day, all the Jewish men in Rimbeck, including Siegfried, were arrested and taken to Buchenwald. Siegfried was released after a month, but he no longer could run a business and instead was forced to work on the railroad. Ludwig could no longer go to public school and instead enrolled in a Jewish boarding school in Ahlem near Hannover.

On December 7, 1941, all Jewish families in Rimbeck were told to pack their suitcases. They were brought by truck to Bielefeld and three days later deported by train to a ghetto in Riga, Latvia. The men and older children were put to work every day. One morning, Siegfried decided to take Ludwig to work with him. That day, the Nazis rounded-up the women and small children and deported them to Auschwitz. Ludwig's mother was taken away and she perished at the extermination camp. Siegfred was an adept gardener and was given the job of landscaping the German quarters. One day he was locked outside of the concentration camp, but fearing for his children's safety, he asked to be allowed back in. In November 1943, Ludwig's family was sent to an ABA forced labor camp near Riga. Ludwig unloaded clothing which had come from German soldiers on the front and transported it on lorries throughout the factory. In September 1944, Ludwig's family was sent to Stutthof. After two weeks they were then transported to Burggraben where Ludwig did repairs on U-Boats. Two months later, on December 9, 1944, Siegfried Fischel, died of starvation while waiting in a food-line with Ludwig. In September 1945, Ludwig went on a death march from Burggraben to Rieben Pommern where, Ludwig continued doing forced labor. Ludwig was liberated by the Red Army on March 10th, 1945. After recuperating in a field hospital, he returned to Rimbeck in August 1945 and reunited with his sister Inge and a cousin. They went back to their house and evicted the Germans who had been living there. Ludwig and Inge learned that their older brother Walter had survived the war and had been liberated at Buchenwald. However, unable to digest the food given to him by his liberators, Walter died shortly thereafter. Ludwig, Inge and their cousin remained in Germany for two years and then immigrated to the United States. Ludwig left from Bremen, Germany on the Marine Marlin. He arrived in New York in March 1947, and married Nanette on June 15, 1958.