A French-Jewish girl poses outdoors in new clothing she received for a wedding in a public institution in Saint Amand en Puisaye, where she was in hiding. 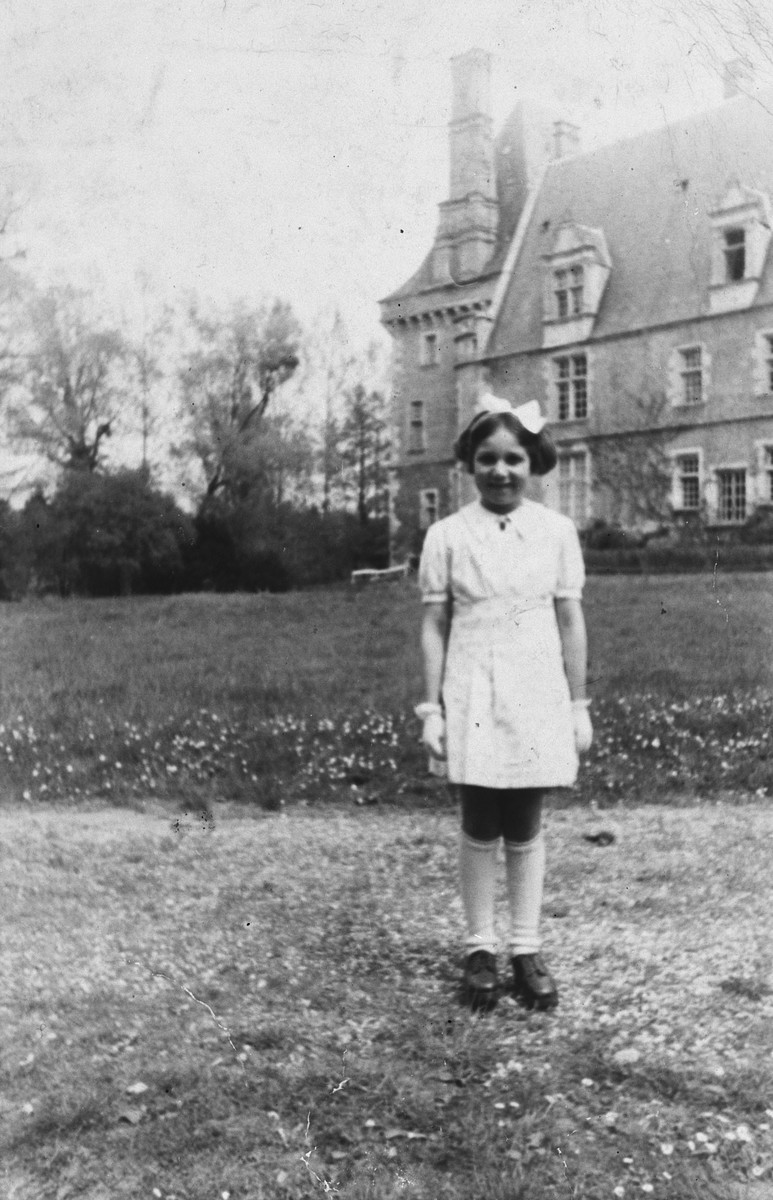 A French-Jewish girl poses outdoors in new clothing she received for a wedding in a public institution in Saint Amand en Puisaye, where she was in hiding.

Biography
Ariela Palacz (born Paulette Szenker) is the daughter of Sacha (Suho) Szenker and Esther-Rachel Grodzinski Szenker. Her parents both came from large Polish-Jewish families. Her father, born on April 24, 1902 in Smielnik, was one of nine children and her mother, born September 19, 1900 in Warsaw, was one of eleven siblings. Sacha and Esther-Rachel married in a religious ceremony in Poland and immigrated to Paris in 1925 where they had a second civil ceremony. Paulette was born on February 23, 1934 in Paris, where her father worked as a tailor. She had an older brother Jacques (b. 11/11/27) and two younger siblings, Claude (b. 1/30/38) and Nicole (b. 5/24/39). The family was close-knit and loving, and Paulette learned to read and play the piano before she started school. After the German invasion of May 1940, the family became subjected to a barrage of anti-Jewish ordinances including an order to wear a Jewish star. As the situation of the Jews became even more perilous, the director of Paulette's school urged the Szenkers to place their children in hiding. One night, Sacha woke Paulette and told her to get dressed quickly and not to make any noise. She discovered her brother, sister, and two strange women in her living room. She was told that her mother had been taken to a hospital. In fact, Esther Rachel Szenker had been taken to an insane asylum, Maison Blanche, where she was experimented on until she died. Paulette was then eight years old. Though they were in violation of curfew, the women drove Paulette to a public assistance orphanage, Denfert-Rochefeau. Her siblings were taken somewhere else. She had to take off her clothes and was given a uniform to wear. Paulette felt that her parents had abandoned her, and she did not know why. She kept hoping this was a mistake and that her would come and get her. The suddenly one day she was told she would be taken somewhere else. While waiting for the train, she found her younger brother and sister, who at first didn't recognize her. Paulette was delighted that they finally had reunited. However, once they arrived in the country, her siblings were taken somewhere else, and she again remained alone. Paulette was brought to the public assistance home of St. Amand en Puisaye, in the Nievre, and remained there for four years. The teachers taught her catechism and how to be a good Christian and a true Frenchman. She never understood why she was separated from her parents and siblings and why she was abandoned. After the war, her father retrieved her and her siblings. Paulette then learned how almost all of her huge extended family had been murdered by the Nazis. Paulette married a Jew, and her father remarried as well. In 1970 Paulette, now Ariela, immigrated to Israel.