Two German Jewsh children sit in the living room of their apartment. 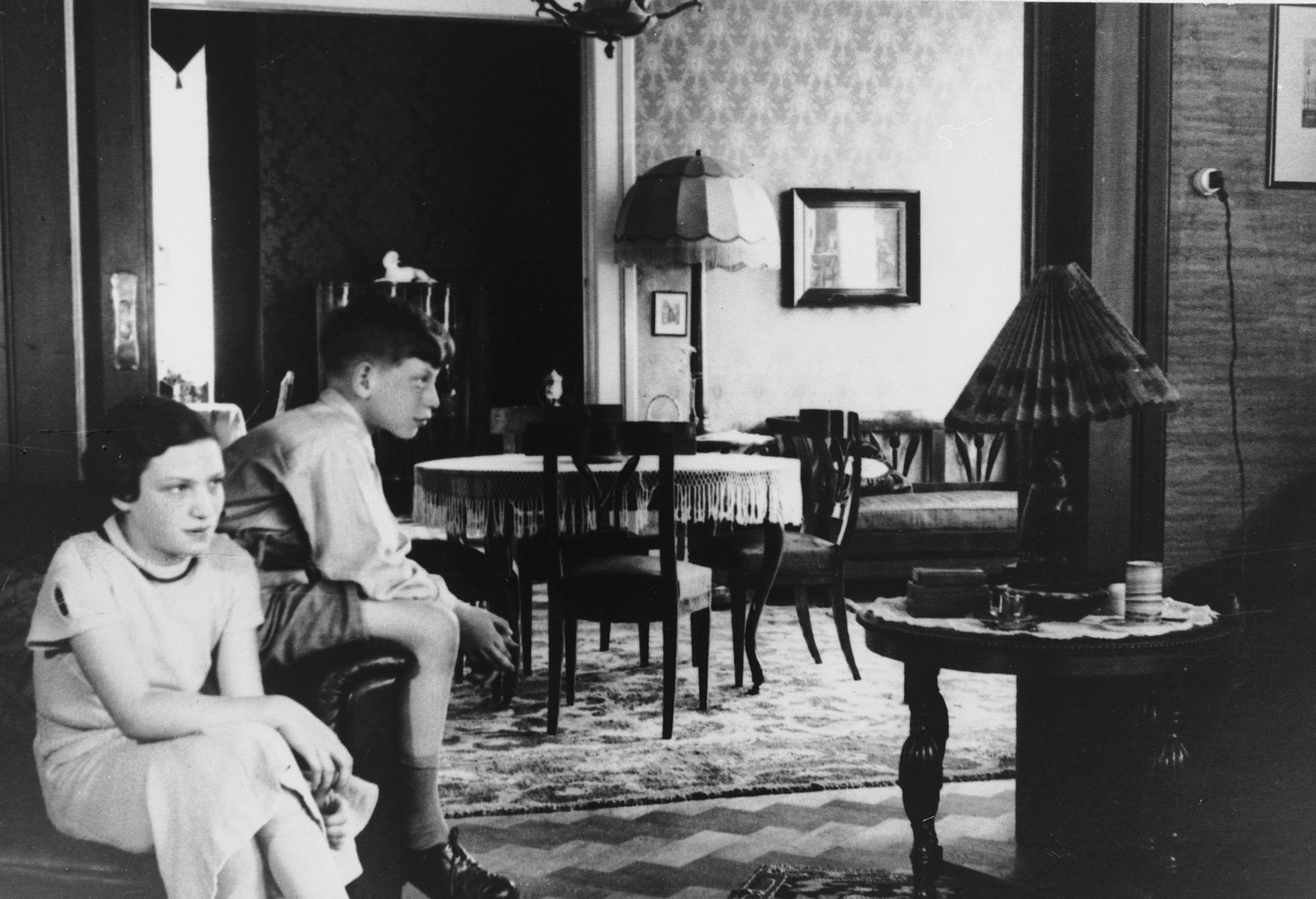 Two German Jewsh children sit in the living room of their apartment.

Pictured are Lore and Erich Rothheimer.

Biography
Susan Schleigh Foote is the daughter of Lore Rothheimer (later Laura Schleigh) and Heinz (Henry) Schleisch (Schleigh). Her mother, Lore Rothheimer is the daughter of Sigmund Rothheimer (b. 1882) and Marie Charlotte Heksch Rothheimer (b. 1900). Marie had two siblings, Kaethe and Hugo. Lore was born on April 30, 1922 in Heidelberg, Germany where her father was a professor of Latin and Greek in the Manheim Obsershule. He also was active in the Jewish community, was president of this synagogue and of Bnai Brith, and chairman of the Jewish student organization. Lore's younger brother, Erich (later Eric Roth) was born in 1924. In 1938 owing to the antisemitism in the German schools, Lore's parents sent her to school in Lucerne Switzerland, and after a few months her brother Eric joined her. Soon afterwards the children received an invitation to join their Uncle Hugo Heksch and Aunt Kaethe Salomon in Paris. Kaethe Heksch was married to a French Jew, Simon Salomon, who owned two stores in Alsace and Paris. The children came to France during the summer of 1938 while their parents remained in Germany. That November Sigmund was arrested during Kristallnacht and sent to Dachau. He was incarcerated for two months and was released after the Salomon's offered to sponsor his immigration to France. Marie and Sigmund arrived in France in early spring of 1939. For one year, they enjoyed freedom and time with their family, but on May 10, 1940 Germany invaded Western Europe. French police immediately arrested Sigmund as a German enemy alien and sent him to Gurs. Shortly thereafter they arrested the rest of the family as well. Since Lore and her mother were arrested separately, they did not know where the other was. Then after six months Lore spotted her mother beyond the barbed wire. Lore approached the French guards who granted them permission to reunite. After one month, the French released the internees. Lore and her mother went to the nearby town of Oloron where by chance they found Erich and Sigmund. Again, the men's freedom was short-lived. Lore's father and Uncle Hugo were rearrested and sent to a detention camp in Tence in the Haute Loire. The rest of the family moved there as well so that they could visit. That summer Lore heard that the minister of an adjacent town was looking for a nanny. She applied for and received the job and thus became the au paire to Pastor Andre and Magda Trocme in Le Chambon-sur-Lignon. Once a week, Lore returned to Tence to visit her family, but she and the Trocmes developed a friendship that lasted their entire lives. Eventually Sigmund and Hugo were released. Hugo had worked as a banker in Heidelberg and had business contacts in the United States who helped him obtain immigration affidavits for the entire family. The Rothheimers sailed to the United States on the SS Villa de Madrid from Barcelona and arrived on July 14, 1941. On December 2, 1945 Lore met Henry Schleigh, another German refugee. They married the following August.

Heinz Schleisch was born in Berlin on May 5, 1913 to Walther and Paola Schleisch. His brother Kurt immigrated to Palestine in 1937 and settled in Kibbutz Shamir. Heinz left for the United States on June 5, 1938. His parents left after Kristallnacht. They took the Trans-Siberian railroad across the Soviet Union. Sadly Walther died on route, but Paola continued on to Shanghai and sailed from there to the United States. Heinz enlisted in the American army and became a military intelligence interrogator, translator and interpreter and rose to the rank of master sergeant. After the war he opened an import camera supplies business.