Portrait of two Jewish sisters together with the French family who hid them. 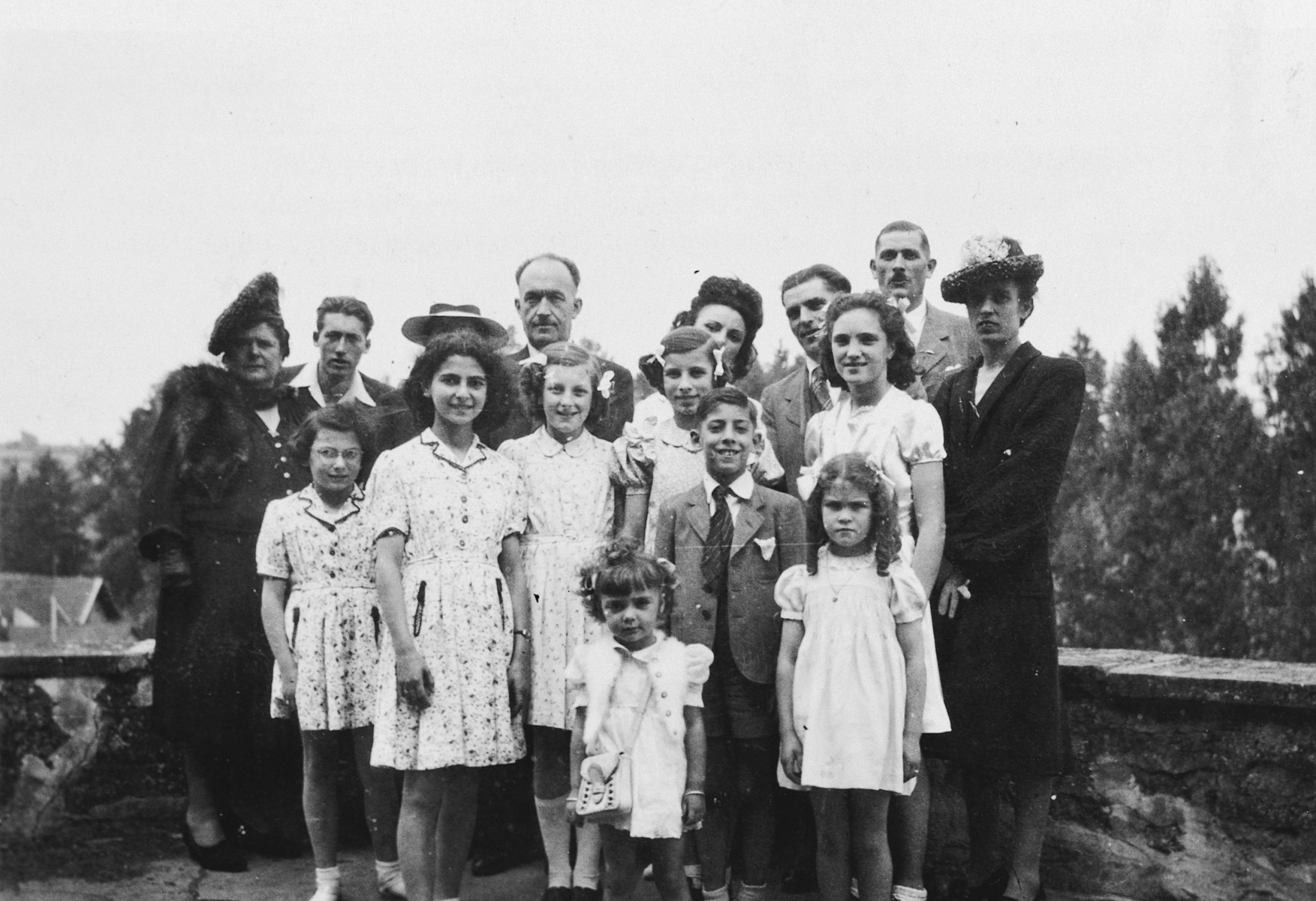 Portrait of two Jewish sisters together with the French family who hid them.

Pictured are Dina and Regine Gartenlaub (front left), Annette Cherrier (left with a hat) and Elly Cherrier (back row, second from right).

Biography
Rivka Avihail (born Regine Gartenlaub) is the daughter of Jacques (Shalom Yaakov) Gartenlaub and Pauline (Polly) Scharapan Gartenlaub. Her father was born in Bukovina (village of Kimpolong) on August 21, 1891 and her mother was born on May 26, 1905 in London. They both moved to Paris where they met and then wed in 1921. Regine was born on August 2, 1932 in Paris where her parents owned and operated a jewelry shop located in the same building as their apartment. She had two sisters and one brother. Odette Sarah was born on March 13, 1922; Georges Elimelech was born on March 25, 1926; and Dina was born on February 21, 1937. All of them survived. Though their mother was not observant, their father was quite religious.

Regine attended elementary school when the war broke out. Her sister Odette, who had won first prize in a piano competition, studied in a music conservatory. Following the German invasion of France in May 1940, the family went to Pornic (the port of the Loire-Atlantique), where two aunts were living. Upon their return several weeks later, the atmosphere was different. Regine continued school but she was afraid. Though her parents had become naturalized French citizens in 1927 they still felt endangered. Regine's parents were able to work in their store until 1941, when they were forced to hang a poster in their store labeling it as a Jewish enterprise. Later that year their store and apartment were both confiscated by the authorities, and they had to move to another apartment. They even had to pay for this confiscation. Regine's mother found a large apartment for them in the Marais, countering her husband's objections with the argument that "if we have only six months to live, we will live well." That same year, Odette went to work for the UGIF as a social worker. In June 1942, Jews were forbidden to enter parks, gardens, theaters and movies and were allowed into stores only one hour a day. Also, curfew was imposed and this was difficult to observe. In 1942 many French Jews, including friends and relatives, were rounded-up and deported. They survived the large round up of the Vel d'Hiv when for some reason the police never entered their apartment. On July 18, 1943, Odette returned home and said she heard there would be another round-up that night and that they had to hide Regine and Dina. Odette brought her younger sisters to her professor, Mme. Cheverry until she could make further arrangements. Upon their arrival, they were told to remove their yellow stars and Mme. Cheverry burnt them. They remained a week with her until they were able to reach a farm in La Chalopiniere. They had false papers under the names Regine and Dina Gartelot that allowed them to become non-Jewish war refugees sent to the country to eat better. The sisters were extremely unhappy there, but they were afraid to complain and add to their parents' worries. Since they had been placed there by their own parents no social agency came to see what was going on. Meanwhile their brother Georges had moved to the south and had joined the resistance group, La Sixieme, smuggling money and notes to people. He managed to visit his two sisters in La Chalopinierre at Christmas time. They told him about their situation, and in April one of Regine's non-Jewish aunts arrived to escort the girls to Paris. They spent a short time with their parents until Mme. Cheverry found a new rescuer Mme. Cherrier, in the town of Charolles, agreed to take the two sisters for the price of room and board. Unlike the previous home, they provided the girls with a loving environment, care, and devotion. They lived like other non-Jewish French children. The sisters attended school, and Regine even studied Latin. On Easter and Christmas they accompanied the Cherriers to church. Regine constantly worried that someone would notice that she did not know what she was doing, and during mass she silently recited the Jewish prayer "Shema Yisrael." In June 1944 a non-Jewish friend came to warn the girls that they needed to leave the Cherrier home since two French police had discovered their address during a search of their parents' apartment. After a short while they were able to return safely. All of Regine's immediate family survived the war. The Allies entered Charolles on September 4, 1944, a few weeks after the liberation of Paris. Regine's mother and older sister visited her and Dina in Charolles. However, because of the postwar difficulties of Parisian life, Regine's mother decided that her younger daughters should remain in Charolles for another year. Regine completed high school feeling totally alienated from her French classmates. She had two Jewish friends with whom she felt at ease. She didn't understand why she survived when so many others were killed. She availed herself of an opportunity to visit Israel with a group of French students, and in 1955 decided to remain there. Regine went to a kibbutz in the Negev where she met her future husband, Eliyahu Avihail. Today Rivka Avihail has six children, thirty-one grandchildren and two great-grandchildren. In 1987 Yad Vashem recognized Georgette Cheverry as Righteous Among the Nations.