Family portrait of two Jewish sisters and their children in Sosnowiec. 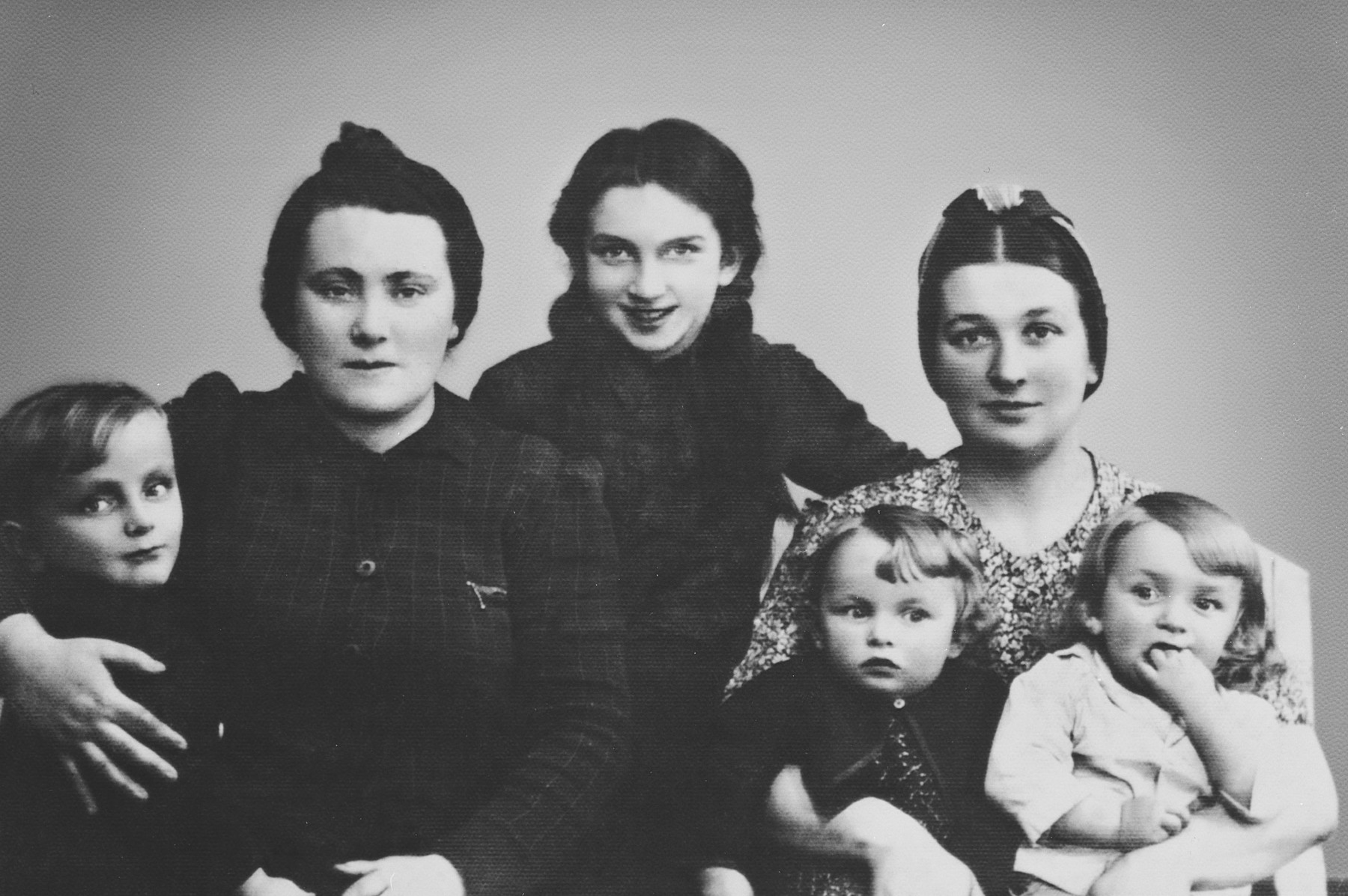 Family portrait of two Jewish sisters and their children in Sosnowiec.

On left are Aunt Rose and her daughter. Genia is in the center and then Esther Wajntraub Paluch holding Ida and Adam.

Biography
Ida Paluch (later Kersz) is the daughter of Chaim Paluch and Ester Wajntraub Paluch (b. 1909). Ida and her twin brother Adam were born on May 3, 1939 in Sosnowiec, Poland where her parents worked as tailors. Her older sister Genia was born in 1932. Chaim volunteered for the Polish army and was not with the family. Ester leaped to her death during an Aktion in 1942 in Sosnowiec, Poland at the age of 33. Her sister Rose Wajntraub cared for the orphaned children until she could find them hiding places. She arranged for Ida to be cared for by a Catholic family in Czestochowa. Wilhelm Maj, rescued from the Sosnowiec ghetto on Christmas day, 1942 and brought her to his pregnant wife Jozefa as Christmas present. She was christened as Teresa (Irena), and the family told people she was their legitimate child. Mr. Maj, was shot three months later by the Gestapo when he was caught smuggling guns for Polish underground partisans. His widow had a baby shortly after her husband's death, who was named Wilusia after the father she never knew. They went to live with Jozefa's father-in-law who was abusive and beat them. Despite the risks involved, Jozefa treated Ida the same as her own daughter and shared their meager food equally. To earn a living, Jozefa took Ida with her on trains to sell cigarettes and alcohol from their suitcase. In 1946 Chaim returned from the Soviet Union where he had been working in a coal mine in Kazakhstan after first having been captured and imprisoned by Germans. He began searching for his family and was unable to find Adam or Genia. He also discovered that not only had his wife died, but her sister also had been killed. Ida was traumatized at the thought of leaving her adoptive mother who she loved. She didn't remember her father, and she had been taught to distrust Jews. The trauma increased after Chaim put her in orphanage until he could remarry. However, once Chaim remarried, Ida returned to her father and also to Judaism. In 1958 they moved to Israel where Ida married and had children. She later moved to the United States. As an adult she continued search to discover what happened to her two natural siblings.
Meanwhile Jerzy Dolebski grew up in Lublin Poland as the adopted son of Jan and Leokadia Dolebski. They adopted him in 1944 and then went on to have five of their own children. Jerzy (Adam) realized he was different from his siblings. Not only did he have a darker complexion, but he also was circumcised. As an adult he began searching for his Jewish roots and joined the Children of the Holocaust organization in Warsaw. After an American journalist wrote an article about the organization, he received a phone call from Ida expressing her belief that they were twins. They exchanged photographs verifying their shared ancestry and reunited in Poland, 53 years after they were first separated.