Two young children, one wearing a yellow star, play on a street in the Lodz ghetto. 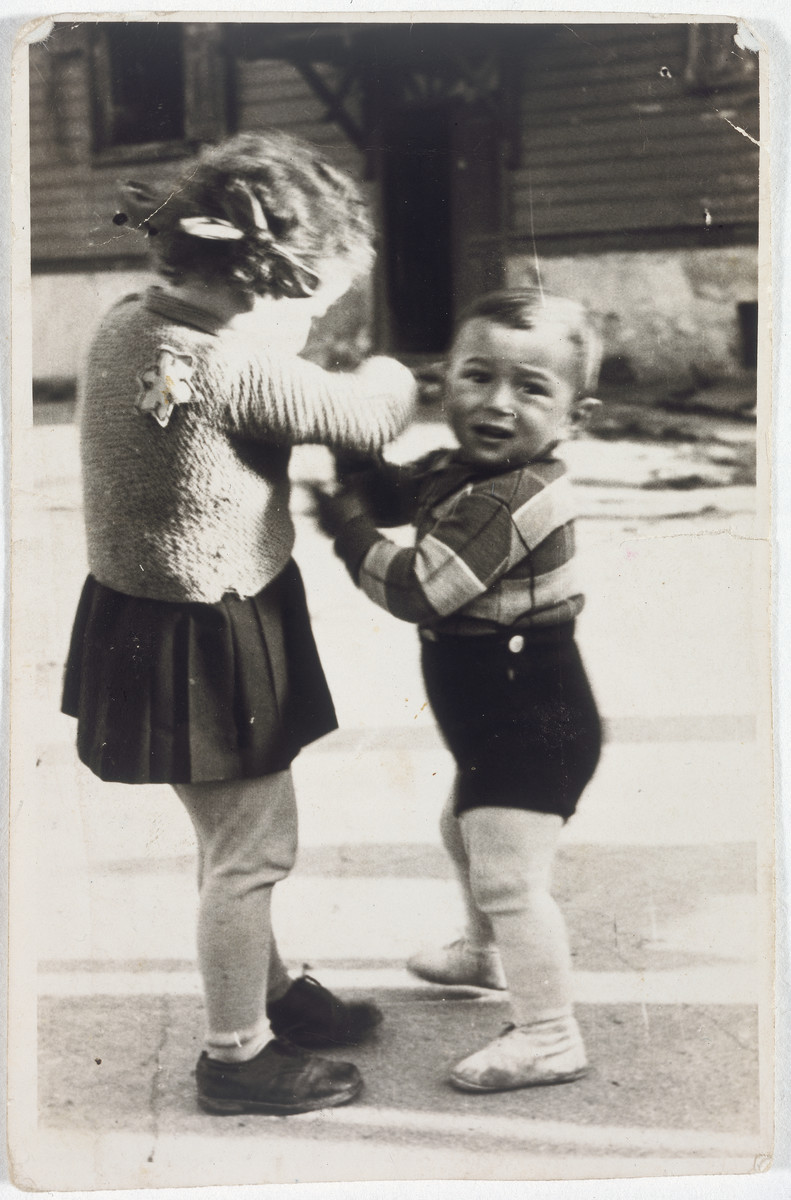 Two young children, one wearing a yellow star, play on a street in the Lodz ghetto.

Ilona Winograd is pictured on the left.

Biography
Ilona Barkal (born Ilona Winograd) was born in Lodz on January 15, 1940. She was the only child of Bajla (Bella) Kozak Winograd (born December 12, 1909), a Strasbourg educated bacteriologist and Markus Marek Winograd, born May 18, 1903, a textile engineer. The Winograd and the Kozak families lived as next-door neighbors at 60 Piotrkowska Street and knew each other for many years. The Winograds had a newspaper distribution business and the Kozak family owned a haberdashery store. Bella and Marek married on February 2, 1938. The Winograd family moved into the ghetto early on and found an apartment where they lived with Marek's parents, Luba and Nuchem Winograd and Bella's parents, Ita and Moshe Kozak. Bella's three brothers Szmul (1910-1944) Fabian (1907-1943) and Izio (d. 1941) lived there as well. Marek worked for the housing department of the Jewish Council, and Bella worked as a bacteriologist while their parents cared for Ilona. During the "Szperra" in September 1942, Ilona being a child of essential employees of the Jewish Council was exempt from deportation. Children who were exempt were marked with a round wooden tag, which was put on their necks. The name of each child was written on the tag. This exclusive group, which consisted of 226 children, was hidden in the hospital on Lagiewnicka Street until the end of the "Aktion." The Winograd family also was allowed to remain in the ghetto beyond the August 1944 general liquidation. On October 21, 1944 they joined a group of some 600 adult Jews and 37 children known as "Biebow's list." The women were sent to Ravensbrueck and the men to Oranienbuerg. Eventually both the men and women were transferred to Koenigswusterhausen, not far from Berlin. Bella Winograd used her skills and opportunities to drug her small daughter in the times of extreme danger to keep her quiet. the Ukrainian Lagerelteste also helped protect Ilona. On April 27, 1945 the Red Army liberated the Winograds. They traveled back to Lodz to search for surviving members of family but without success. Among their many family members who perished were Ilona's grandparents, Nachum and Luba Winograd and her father's siblings, Sofia, Berta and Sigmund. Ilona and her parents left Poland in December 1946 and settled in Sweden. Ilona grew up in Stockholm; graduated from dentistry school and in 1970 she immigrated to Israel.