A mother, her two children and a friend sit around a round-wooden table. 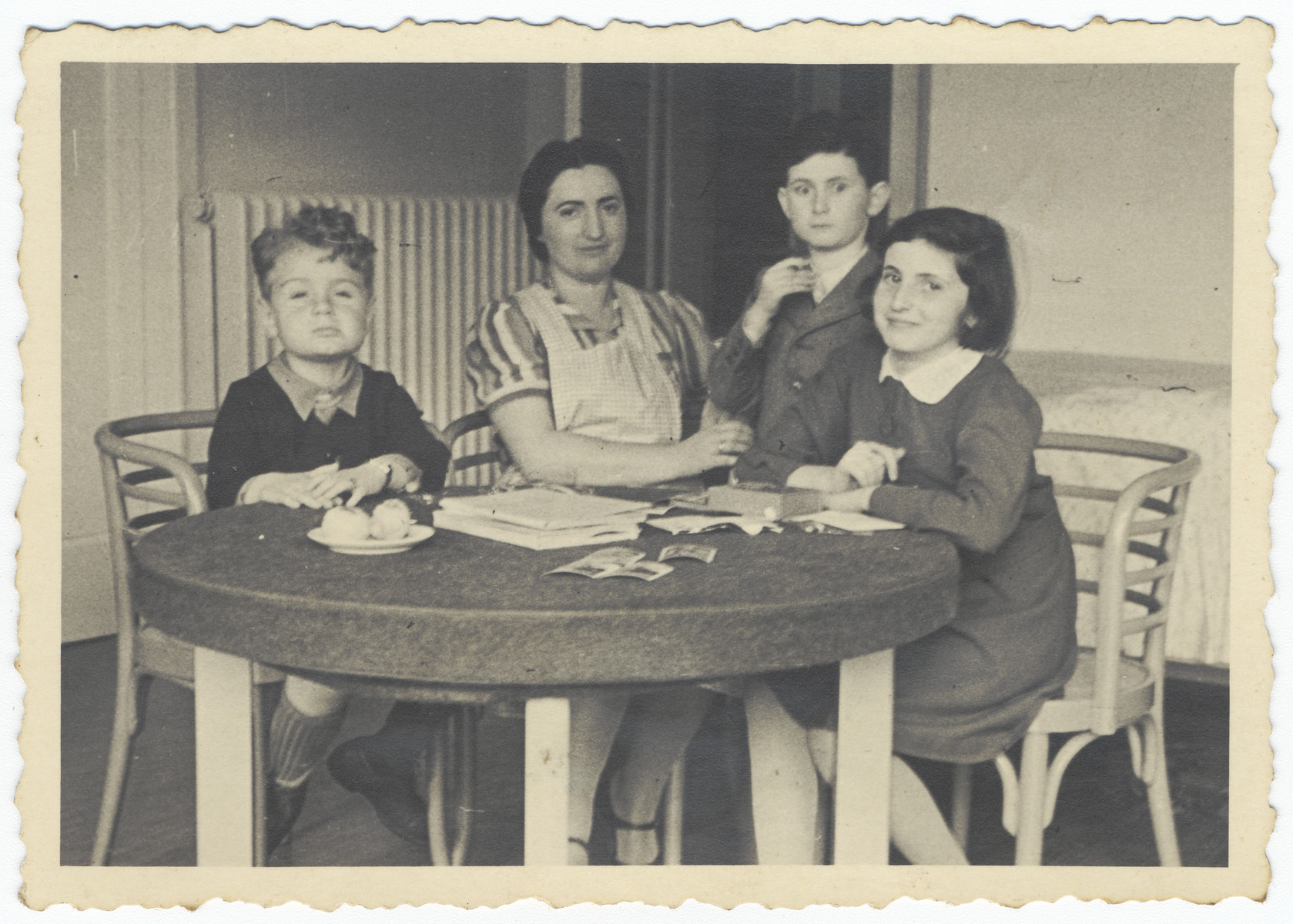 A mother, her two children and a friend sit around a round-wooden table.

Pictured are Frieda Zeilender, the aunt of the donor, and her two children to her right, Dolly and Ralf. All perished in the Holocaust. The photograph was saved by a family who rented room in their building and helped provide them with food.

Biography
Janina Schlachet (now Mozes) is the daughter of Dr. Herman Schlachet and Lotte (nee Stern) Schlachet. Her father was born in Krakow on May 7, 1896, and her mother was born in Bielsko-Bialo on August 24, 1911. Janina was born on August 25, 1931 in Krakow where her father had an obstetric and gynecology practice. Janina's one brother Aleksander was born in Krakow on September 5, 1933. Though the family was not religious, they observed major holidays, and Janina attended a Jewish elementary school and studied Hebrew. On August 31, 1939 Janina's father sent his wife and children by train to Prezmysel together with the Brauner family and their children, Leon and Adam. In addition to their own luggage, they also transported belongings for a third family who was follow. After Janina's father, who had traveled by foot from Krakow, joined them about a week later, the family left for Lvov by horse and buggy. However, the horses became frightened when they passed a burning factory, and the carriage overturned. Dr. Schlachet broke his collarbone and had to temporarily remain behind with the luggage, while a Polish officer took Janina, her mother and her brother by motorcycle to Lvov. Once Dr. Schlachet joined them, the family reestablished some semblance of normalcy. Dr. Schlachet reestablished a medical practice while the children attended school. However in either June or July 1940 Soviet authorities rounded up the Schalchets along with many other Polish-Jewish refugees and deported them to Siberia. Though Dr. Schlachet still worked as a physician, Janina's mother was forced to labor outside in the tundra removing the bark from trees. For the next two years, the Schlachets shared a two room log cabin with three other families; two families lived in each room. Then in 1942, one year after the German invasion of the Soviet Union, the Soviets granted amnesty to the Polish internees and the Schlachets moved to Uzbekistan. The children again attended school, and Dr. Schlachet established a hospital and orphanage for Polish children. In 1946 the family returned to Krakow, and a few weeks later moved to Katowice. In 1947 Janina and her brother aaccompanied Rabbi Schoenfeld on a children's transport to England. They stayed in a boarding school until 1948 when they were expelled for lack of payment and moved to a boarding house under the auspices of the Jewish Refugee Committee run by Mrs. Friedman. Janina worked in an office for the next four years and immigrated to America in 1953 sponsored by HIAS. Her parents left Poland for Vienna in 1950 but her father was not allowed to work. Instead they supported themselves on their income from properties they sold in Poland. In 1953 they also immigrated to the United States. Dr. Schlachet passed the medical boards and worked in the emergency room of Metropolitan Hospital. Janina eventually resumed her studies and received a master's degree in Vocational Rehabilitation and Counseling.