Studio portrait of a Jewish family in Metz after the war. 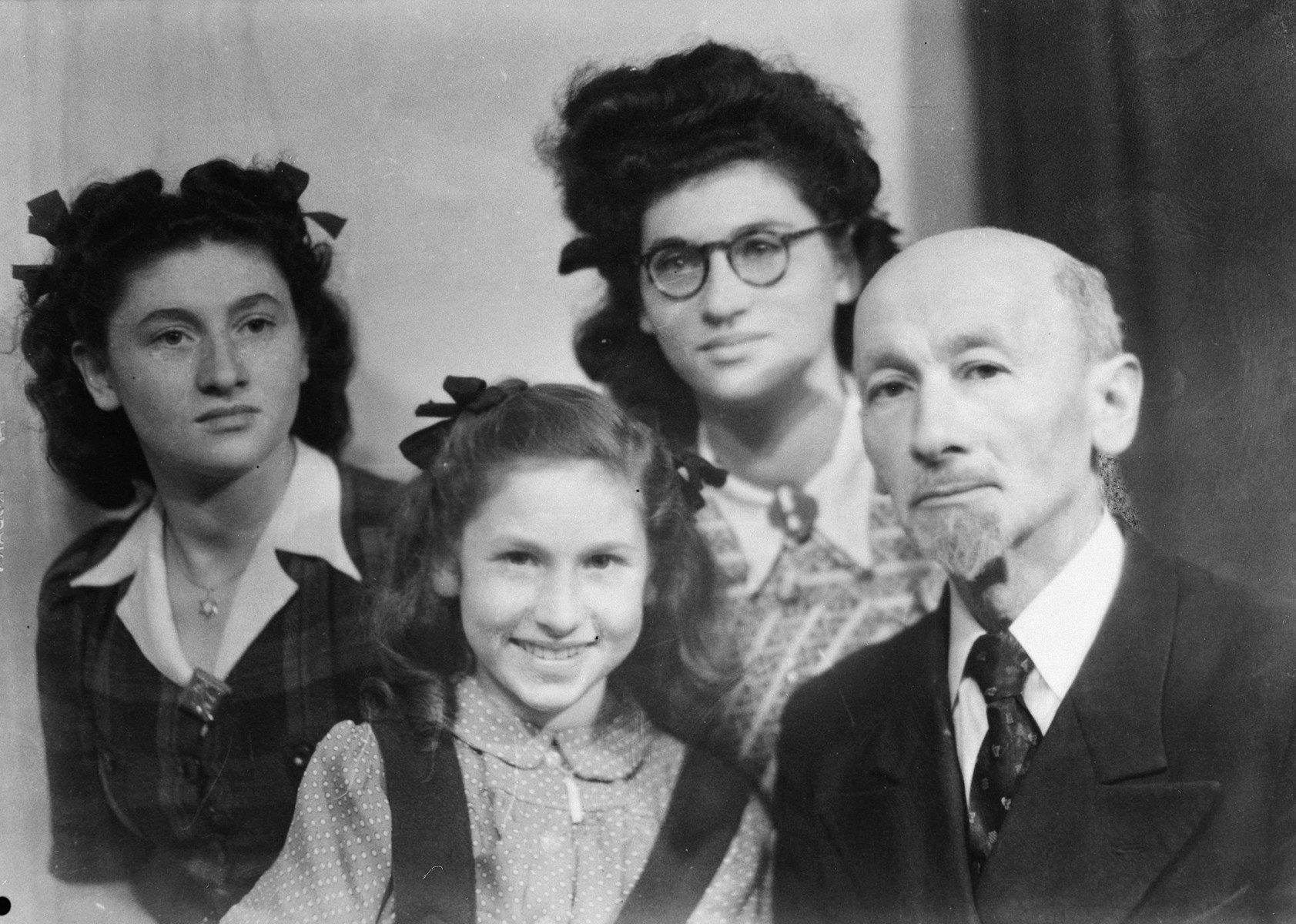 Studio portrait of a Jewish family in Metz after the war.

From left to right are Helene, Rivke, Rose and Eliezer Steinberg.

Biography
Helene Bloch (born Helene Steinberg) is the daughter of Eliezer (Lazare) Steinberg and Hemine (nee Goldstein) Steinberg. Helene was born on January 11, 1924 in Gelsenkirchen, Germany, and grew up in Metz. Her mother died from an appendicitis when Helene was twelve years old. Her father (born on November 14, 1882 in Sienne, Poland) worked as a clothing merchant, and the family was religiously observant. Helene had at two brothers, Max and Sylvain, and four sisters Gisele (Dreifus), Annie (later Willerfort), Rose and Rivke. Helene attended public school until 1939 and then a Jewish school for first grade. Helene's older brother Sylvain Steinberg (born on December 12, 1912) was sent on convoy #73 to Auschwitz and perished. In 1939 Helene went to stay with her sister Giselle Dreifus and her daughter Miriam in Montceau-les-Mines; she remained there until 1941. Helene's father remained in Metz, and she did not hear from him until after the War. Giselle's husband Alfred was of German origin and had been sent to forced labor in Germany. He later was deported and perished in 1944 at the age of 33. One day German soldiers entered the town on motorcycles, and Giselle asked the commander for a travel permit to go to Villefranche with her children. Strangely enough he granted her request; Helene accompanied the Dreifus family to Villefranche where they pretended to be non-Jewish war refugees. Giselle found an apartment, and Helene worked in a spool factory with her sister. Her youngest sister, Rivke, was sent to a village in order to obtain food. After 1942 Helene obtained false papers. At the end of the war Helene and her sisters went into hiding and rented a room until they were liberated by the Americans. After the war Helene reunited with her father, but sadly he died soon thereafter. She went to work for OSE (Oeuvre aux Secours Aux Enfants) as a secretary and then as a monitrice (counselor) for two years. In February 1947 she immigrated to Palestine illegally on Ha-Ma'apil HaAlomini (formerly San Miguel). After the British intercepted the ship, she was sent to Cyprus and interned for a year. After finally arriving in Palestine, she settled in B'nai Braq, and in 1949 she married a man from Strasbourg who she met in Cyprus. Helene's sisters also immigrated to Israel.