Identification issued to Lucie Kritz in 1933 and restamped by the Soviet government in 1940. 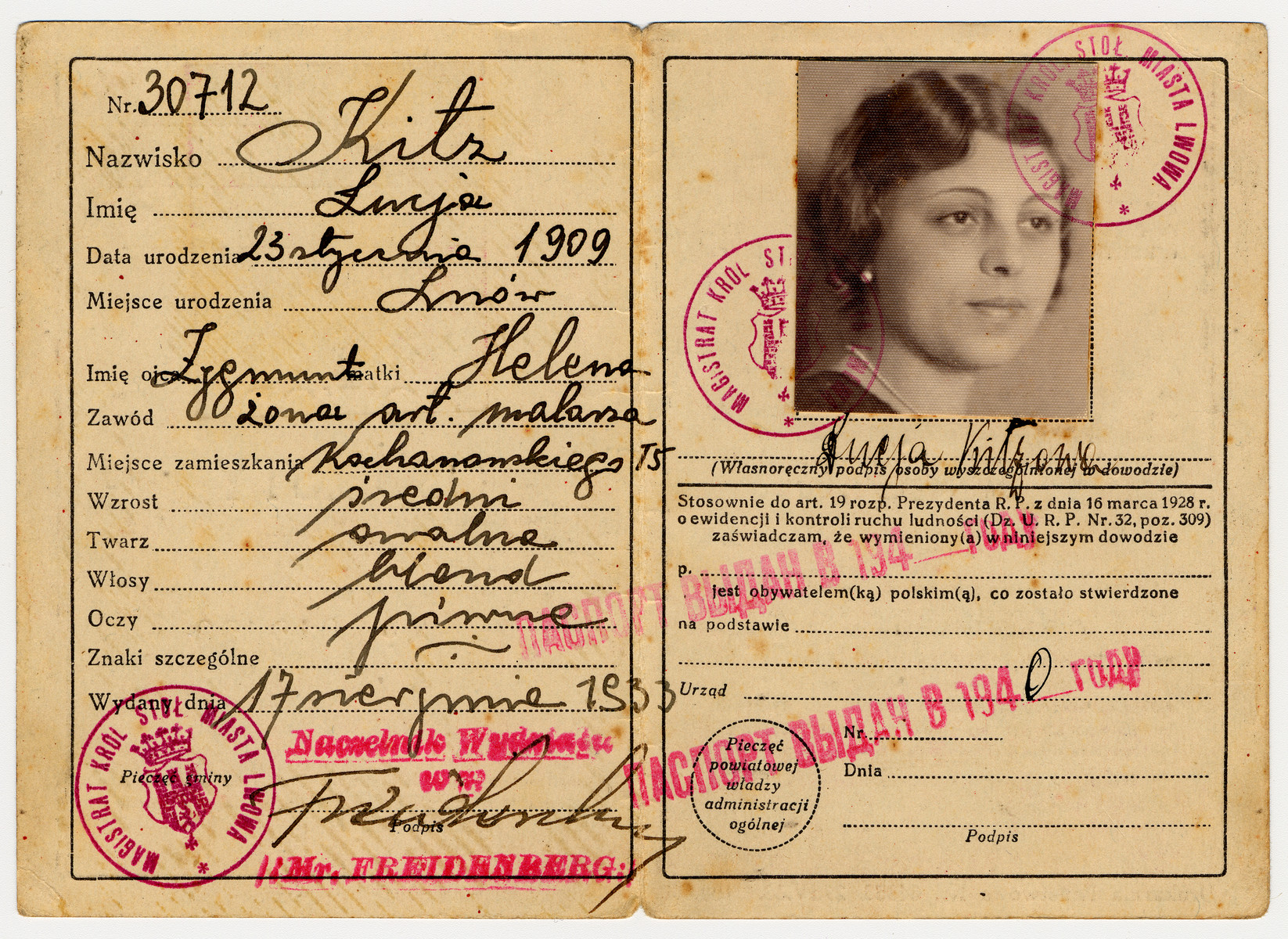 Identification issued to Lucie Kritz in 1933 and restamped by the Soviet government in 1940.

Biography
Emanuella Sherman (born Emanuella Illa Kitz) is the daughter of Martin (Marcin) Kitz and Lucie Lind. She was born on January 6, 1936 in Lvov Poland and grew up in an assimilated, cultured household. Her father was a well known artist who had studied with Max Lieberman in Germany and exhibited throughout Europe. Her maternal grandfather Zygmund Lind had been a lawyer and dean of the lawyer's organization. Illa's parents divorced when she was quite young, and she lived with her mother and grandmother. After the start of World War II, Lvov initially fell under the Soviet zone of occupation. Lucie's brother, Jurek Lind, who had been baptized in order to enter university escaped from Warsaw and came to Lvov to stay with Illa and her family. He brought with him ten Jewish friends who remained in their apartment as well. In June 1941, Germany invaded the Soviet Union and occupied Lvov. Since so many people lived in the Lind's apartment, the Germans initially did not confiscate their apartment and allowed them to remain there. However in November 1941, they ordered that all Jews move to a ghetto in the northern part of the city. Lucie at first planned to obey the order, but her brother knew this could be a death sentence and made other plans. They entrusted Illa to peasants who were related to one of their maids, and Lucie and her mother moved to Warsaw to work as maids under false names. Illa's mother spoke a perfect German as she had been educated in Vienna which greatly facilitated her communication with the Germans. Illa was unhappy with the peasants, and after about a year, her uncle picked her up and brought her to Warsaw to rejoin the family. He gave her a big doll and told her to hug it if the Germans appeared. Illa's great grandfather had been a jeweler, and all of the family's jewels were hidden inside the doll. Though Illa's mother and grandmother frequently changed their alias, blackmailers often came to their apartment trying to determine their real identity. One time they repeatedly asked Illa to disclose her real name. Her mother gave her a look, and she did not reveal any information. However, she became so upset that after they left she threatened to tell everything the next time they came. Soon afterwards, Lucie forced Illa to look out the window as an SS man first forced a child to clean his boots and then shoot him. Illa's mother wanted to teach her a lesson on why it was so important to be silent and not to divulge their true identity. The next day, having been baptized and drilled in the Catholic prayers, Illa's grandmother brought her to a convent in Milanovek, a suburb of Warsaw. Her grandmother claimed that she was her neighbor's orphaned daughter. Illa remained in the convent from 1942 to 1944. Her grandmother managed to visit her on occasion under the pretext that she was a concerned neighbor. After the Polish Warsaw Uprising in August 1944, Lucie came to the convent and picked up Illa. Together, with Illa's grandmother, they went to Rabka where they remained until 1945. The two women worked in a factory near the Tatra Mountains belonging to a German named Deutsch. He had a Jewish girlfriend and harbored 45 Jews in his factory. At the end of the war, Rabbi Schonfeld came to Poland looking for Jewish children to take to Britain. Lucie decided to send Illa with him to join an aunt who was already in England. Illa remained there for three years and then returned to Poland. Upon her return, she was arrested and tortured until she admitted she was Jewish. The following year she immigrated to Israel, and in 1962 she moved to the United States. Though Illa, her mother and grandmother survived, Jurek Lind was shot by blackmailers in 1944 at the age of 32. Illa's father, Marcin Kitz, perished in 1943 at the age of 58, probably in Belzec. Her mother remarried during the war, and her second husband, Henryk Rothard, also perished, as did their entire extended family.