A survivor of Theresienstadt and resident of the Deggendorf displaced persons' camp poses with his daughter who is working nearby as a censor for the American army and whom he hasn't seen for more than six years. 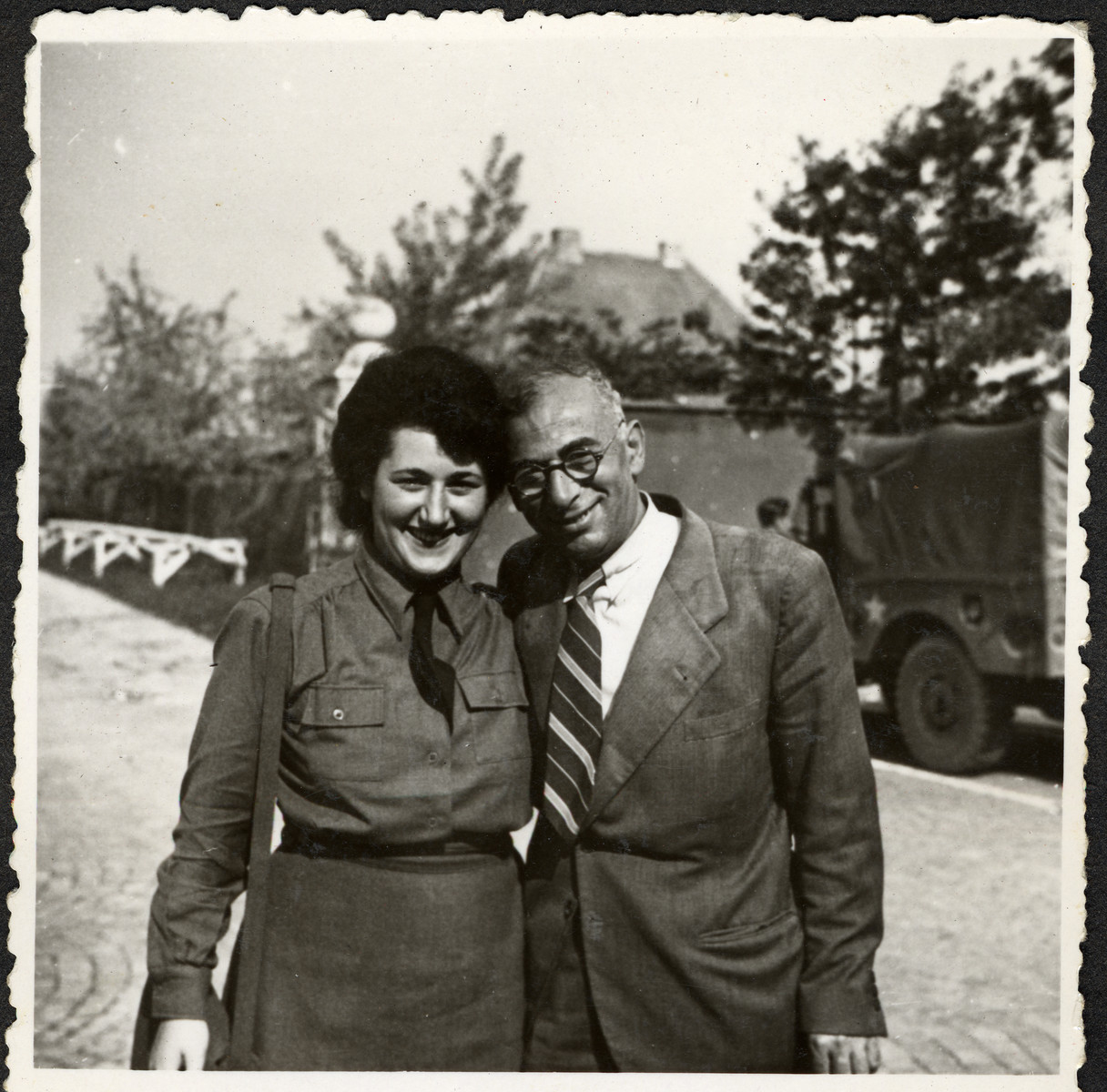 A survivor of Theresienstadt and resident of the Deggendorf displaced persons' camp poses with his daughter who is working nearby as a censor for the American army and whom he hasn't seen for more than six years.

Pictured are Marion and Fritz Sauerbrunn.

Biography
Marion House (born Marion Sauerbrunn) is the daughter of Fritz (Fred) and Jachet (Lola) Sauerbrunn. She was born on February 23, 1923 in Berlin where her father had been a partner in a financial firm and held a seat on the stock exchange. However, after the Nazi seizure of power in 1933 he entered the zipper business. Both of her parents were of Polish Jewish extraction. Her father was born in Berlin to Polish immigrants; her mother was born in Chrzanow, Poland and came to Germany as a young teenager. Marion initially attended a private German school in Berlin. Then, after three years the principal told the Jewish students it would be best if they found a new school. Marion's parents transferred her to a Jewish school. Despite increasing antisemitic regulations, Marion's life became more pleasant in the new school as she was surrounded by other Jewish children. She also joined the Hashomer Hatzair Zionist youth movement and a Jewish sports club. During Kristallnacht, one of her uncles was sent to a concentration camp; he was released after six weeks after promising to emigrate. Marion's parents also debated whether to emigrate, but they decided to remain in Germany since they didn't want to abandon her ailing 82 year-old grandfather. Instead, they sent Marion on a Kindertransport to England. She left Berlin in May 1939 at the age of 16 and was one of the oldest children on her transport. On the train she met a girl who had attended the same German school as she, and they stayed together throughout the voyage. After the train crossed the Dutch border, women from Red Cross welcomed the children with fruit, pastries and hot chocolate. From Holland the children boarded a boat for Harwich and then went by rail to London where their foster parents came to meet them. Soon all the children had been claimed, except for Marion and her traveling companion. Eventually someone took Marion to anther train station, handed her her new address and told her she would be met at the station. When again no one was there to greet her, she spent all her remaining money on a cab. Eventually she arrived at a hostel where some twenty other refugee girls from Germany Austria and Czechoslovakia were staying. Despite feelings of homesickness, Marion enjoyed her stay there. When it was time for her to obtain a job, she was delighted to be offered a position at Oxford as a library trainee. However, just as she was about to begin her new position, she contracted whooping cough. By the time Marion had recovered, the position was no longer available. Instead she was hired to work as an office trainee in a family owned real estate firm. The owners had three young children and instead of teaching Marion the business, they used her as their nanny. Marion felt exploited and unhappy. Luckily she had aunts and uncles in London. When she first arrived in England, they were too poor to take her in but by now they had established themselves and welcomed Marion into their home and treated her as they would their own child. However, Marion also had to join them in their furrier trade which was not a career she would have chosen voluntarily. Marion remained with her relatives for the remainder of the war surviving several close calls during the German bombing raids on the capital. After the war ended, Marion unexpectedly received a postcard from her father informing her that both he and her mother had survived. They had remained in Berlin until 1943 when they were placed on one of the last transports to Theresienstadt. After their liberation by the Red Army on May 8, 1945, they went to the Deggendorf displaced persons' camp in Germany. Since her parents could not come to England immediately, Marion decided to join them in Germany. However, since civilians still were not permitted to travel to the continent, Marion enlisted in the American army as a German censor for the censorship office. She was sent to Munich and managed to see her parents on weekends. One year later, in 1946, she and her parents immigrated to the United States on board the Marine Perch. Despite her earlier misgivings about having learned the profession, Marion easily found work as a trained furrier. She also met a Viennese Jewish refugee named Adolf (Dolfi) House who had come to the States via Switzerland. They married on June 19, 1949 and have a daughter, Sally. Marion worked for the last 35 years as a consultant, advising Holocaust survivors how to obtain reparations from Germany. She also speaks to groups and school children about her own war experience.