A group of women carrying large bundles march to an assembly point during a deportation action in the Lodz ghetto. 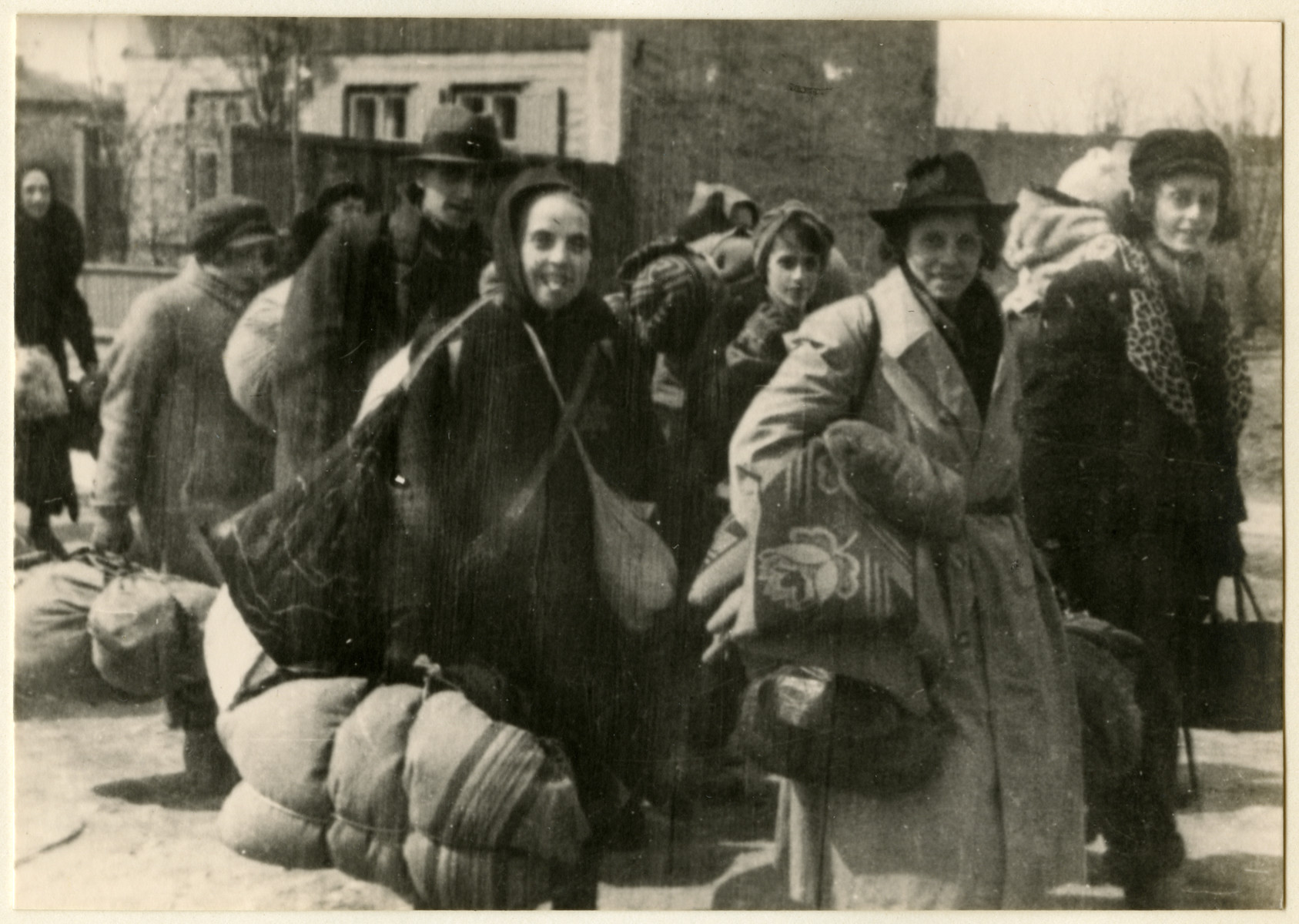 A group of women carrying large bundles march to an assembly point during a deportation action in the Lodz ghetto.

The first deportations from the Lodz ghetto were to labor camps in the Poznan area. These commenced in December 1940 and continued until June 1942. Deportation to death camps began in December 1941, with the transport of Gypsies to Chelmno. This was followed by a steady flow of Jewish transports from January through May 1942, in which 55,000 were taken to Chelmno. After a four-month hiatus, deportations resumed on September 1 with the evacuation of the ghetto hospital. This was followed by the eight day Sperre (or Gehsperre) action (September 5-12) of the ill, the elderly, and children under ten years of age. 572 Jews were murdered and 15,000 deported to Chelmno, during this action. There were no further deportations to death camps from Lodz for the next one and a half years. In the spring of 1944, the Nazis reactivated the dormant killing center in Chelmno in preparation for the ghetto's liquidation. From June 23 to July 15, 1944, 7,000 Jews were deported there. Thereafter, all deportation trains were routed to Auschwitz. The transports to Auschwitz commenced on August 7 and continued until August 30, by which time more than 74,000 Jews had been dispatched to this killing center. After this final transport, 1,200 Jews remained in two assembly camps in Lodz. Roughly half of them were soon transferred to labor camps in Germany. The remainder was put into the Jakuba Street camp in Lodz, where they collected the abandoned property and prepared it for shipment to the Reich. These 600-800 Jewish prisoners evaded a planned mass execution by taking refuge in the abandoned ghetto. They were finally liberated by the Soviets on January 19, 1945.
https://encyclopedia.ushmm.org/content/en/article/lodz.
Biography
Mendel Grosman (1913-1945), Lodz ghetto photographer, was the son of Shmuel Dawid Grosman (b. June 15, 1882) and Chana Ruchla (b. February 13, 1887). Mendel was born on June 27, 1913. His oldest sister Rut immigrated to the United States in 1919. He had one brother Jakub who died of an appendicitis, and two other sisters. Feiga Grosman Frajtag was born 1910. She was married to Szymon Frajtag (b. 1904) amd had a son, Jakub (Jankush) born in 1938. His younger sister Roszka (Rojza Miriam ) was born on January 20, 1918.