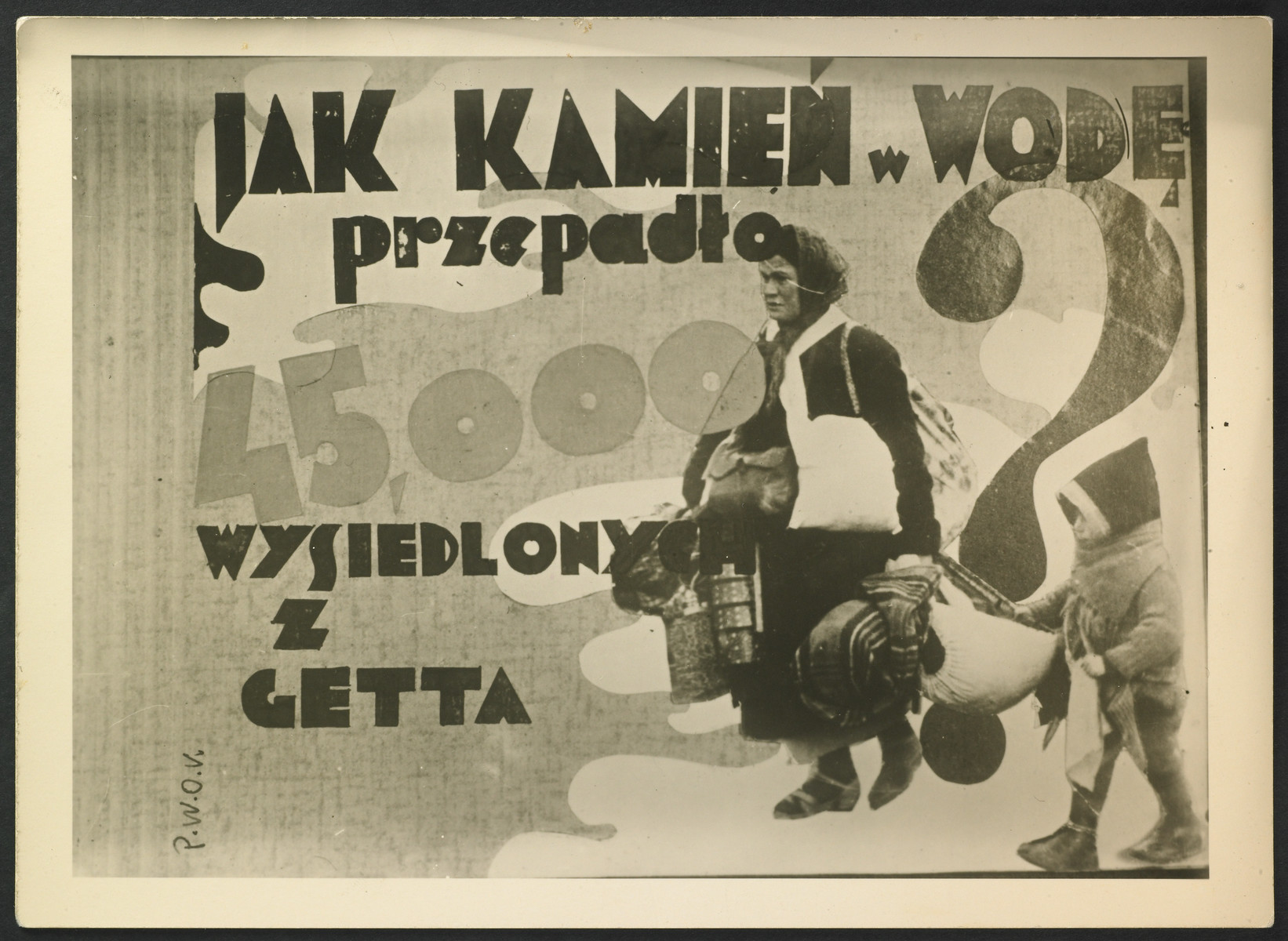 The sign reads: "Jak kamien w wode przepadlo 45,000 wysiedlonych z Getta" ("Like a stone in water they disappeared - 45,000 deported from the ghetto"). The collage was published during the war by the underground organisation PWOK, the Aid for Prisoners of Concentration Camps.

[Source: "Mendel Grosman" video produced by Aliza Tzigler, Videofilm International 1988]
Arie Ben Menachem (born Arie Princ) was the son of Max Menachem Princ, an artistic engraver, and Hinda Princ. Arie was born in 1922 in Lodz, Poland. During the war Arie befriended the photographer Mendel Grosman and became his assistant. Between 1942 and 1943 Arie used some of the photographs taken by Grosman to create a series of 18 collages assembled in an album and depicting the tragic realities of the ghetto. In his artwork he hinted of the disappearance of the deportees from the ghetto. In August 1944 when Arie and his parents were deported to Auschwitz, Arie took his album with him. The album was immediately confiscated, but some copies of individual sheets surfaced a few months later in the Polish underground press (published by the PWOK, the Aid for Prisoners of Concentration Camps). The original pages were never found. Arie's mother, Hinda was murdered on arrival in Birkenau, but Max Princ, an artistic engraver, was needed by the Germans in their efforts to produce counterfeit currency. Arie also claimed to be an engraver, and he and his father were supposed to be taken to Sachsenhausen where the production of false British pounds took place. For unknown reason instead they were taken to the Goerlitz concentration camp and later to Gross Rosen. Max Princ perished during the death marches in the winter and spring of 1945. Arie continued through many more camps until the German guards abandoned the small group of Jews, exhausted and on verge of death, somewhere in the Austria mountains. The US Army rescued them. Arie recuperated in a hospital and a few months later went to Palestine via Italy. He married Ewa Bialer a girl he had met in the Lodz ghetto in the Hanoar Hazioni youth group. Arie Ben Menachem passed away in 2006.