A Jewish family walks down a street in Lodz. 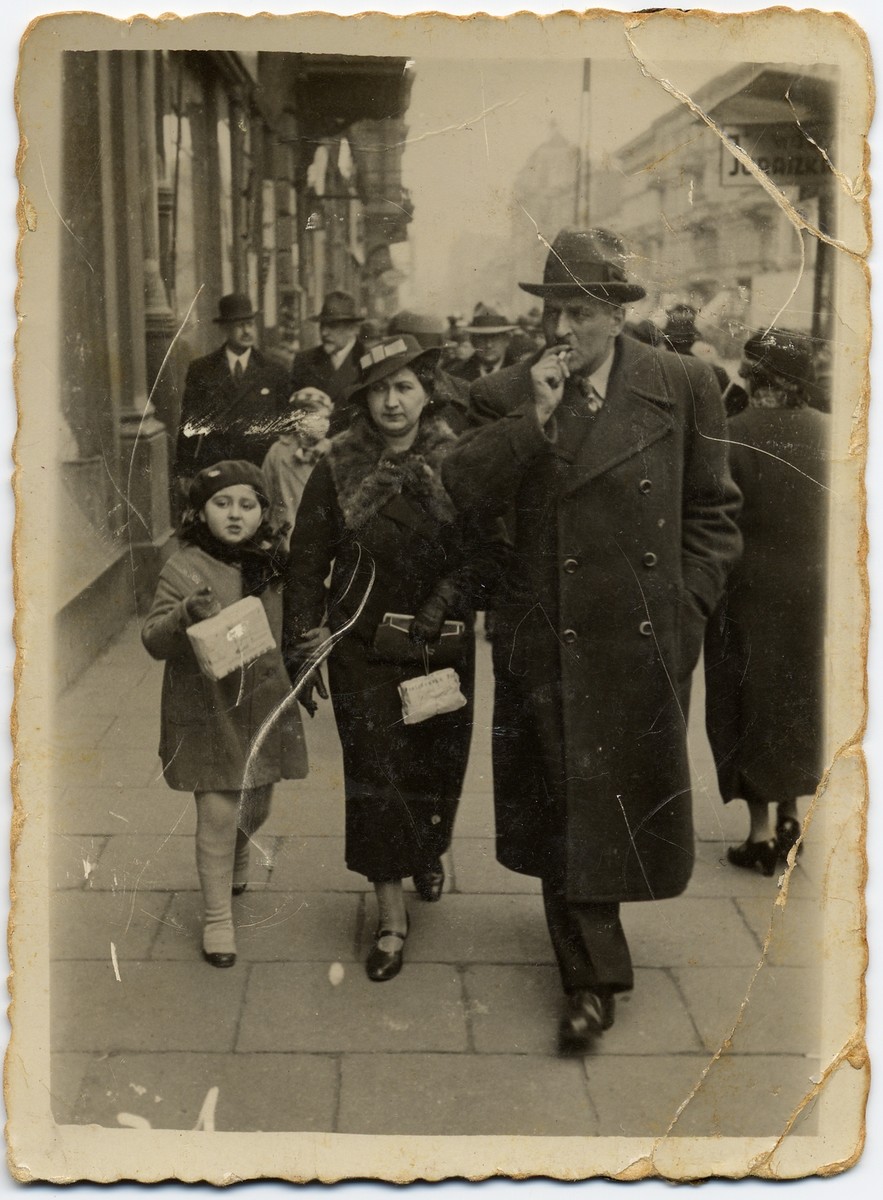 A Jewish family walks down a street in Lodz.

Biography
Esther Eisen (born Ester Tusia Cygielberg) is the daughter of Falik and Rozka Cygielberg. Rozka was Falik's second wife. His first wife, with whom he had a son named Zachariah Salek (b. 1915), was Rozka's sister. Ester was born on February 1, 1929 in Lodz where her father worked as a merchant. Anti-Jewish repression began immediately after the Germans entered Lodz in September 1939. Tusia's father was severely beaten and her uncle Mietek was shot and killed in the street for defending a humiliated Jew. In January 1940, the family was relocated in the ghetto where they suffered the cold and the starvation. Tusia started to attend the school number 25 in the 6th grade and after class she often helped her mother make decorated pins to sell in the ghetto. When her school eventually moved to Marysin in June 1941, Mordechai Chaim Rumkowski, the chairman of the Jewish ghetto administration, came to visit. The students paraded for him and sang songs in Yiddish and Hebrew. Tusia took the opportunity to petition Rumkowski to give her father a job describing her family's poverty. She also included a small gift -- two doilies made of beads in the shape of the ghetto. Tusia enjoyed playing with her friends in school, but the most important part of the day was eating soup after the fifth period. Tusia's mother was very sick at the time, but she was released from the hospital because the doctors could not cure her and needed her bed for others. Tusia got a job in the spring designing artificial flowers for the hat-making workshop. In October 1941, the schools closed, and Tusia received a needlework job. Soon afterwards, Tusia's brother Salek died of hunger at the age of 26. During the "Gehsperre Aktion" of September 1942, Tusia's mother was selected and taken for deportation. Tusia wanted to run after her, but her father held her back. Tusia then got sick with typhus. At this time, her father worked in the ghetto housing administration. Tusia and her father later also received deportation notices, but she obtained the assistance of Mr. Tabaksblat, a clerk in the ghetto's administration, to reverse the order. During the final liquidation of the Lodz ghetto in August 1944, Tusia and her father attempted to hide, but hunger forced them to leave their hiding place. They were taken to Auschwitz and later to other camps. Tusia was liberated in May of 1945 and went back to Lodz, hoping to reunite with members of her family, but none survived. She then left Poland and spent a few years in a displaced persons camp in Germany where she married before finally reaching Israel. After her first husband died, she married Romek Eisen, a childhood friend and whom she had known in the ghetto.