Jewish men in a Hungarian forced labor battalion stand inside and along side a train. 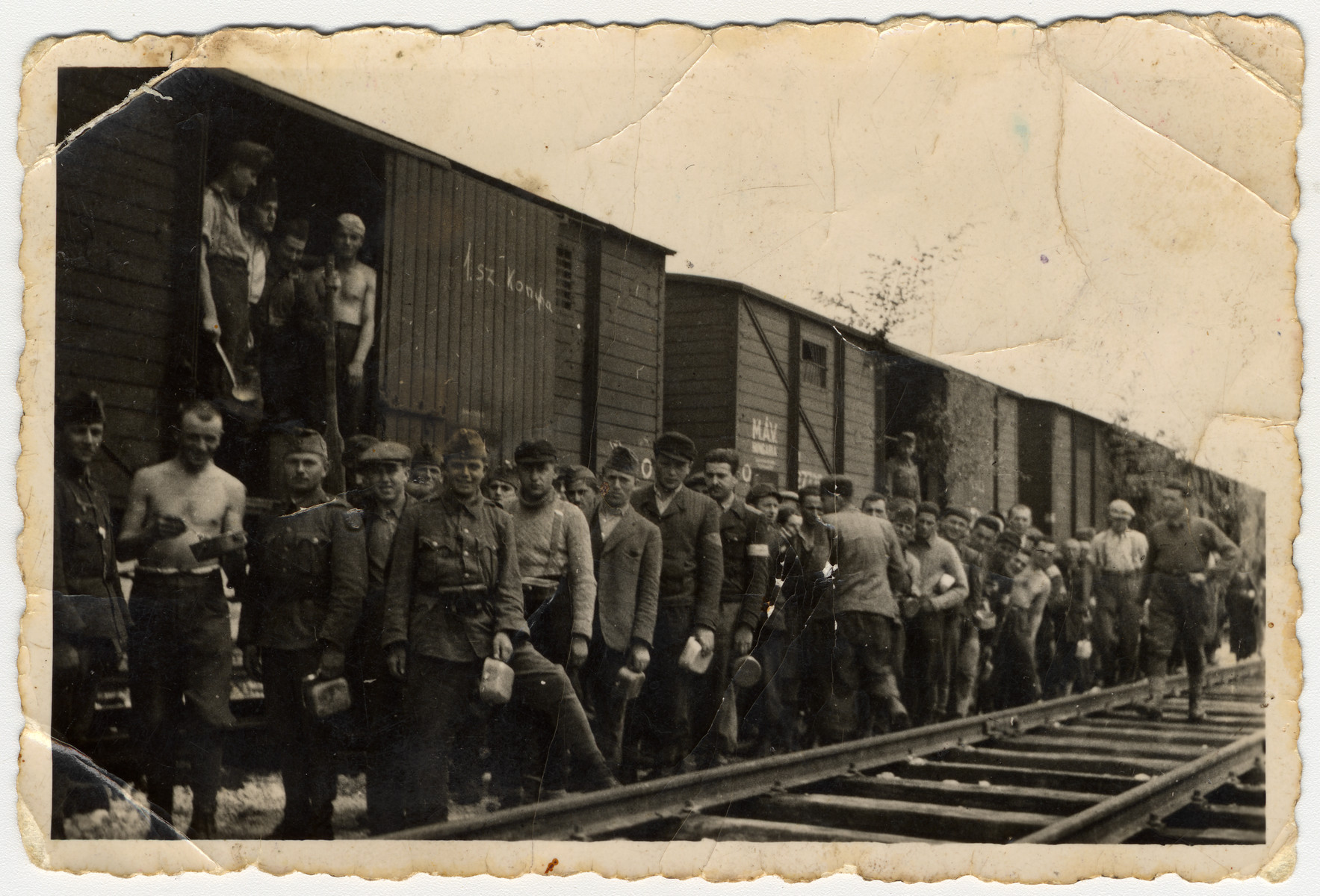 Jewish men in a Hungarian forced labor battalion stand inside and along side a train.

Biography
Vera Hecht (born Veronica Vera Salamon) is the daughter of Marton and Ilonka Salamon. She was born on June 2, 1930 in Valea-lui-Mihai, Romania, and her younger brother Imre was born in 1935. The family was very religiously observant and close-knit. In late August 1940 Hungary seized control of northwestern Romania including Valea-lui-Mihai, but life did not change substantively for the Salamons. They continued to enjoy successful, happy lives unaware of the atrocities elsewhere in Europe. Vera attended both a private Jewish school and cheder, where she learned traditional subjects and Hebrew, respectively, and her parents maintained good relationships with non-Jews in their community. All of this changed, however, with the German entry into Hungary in March 1944. Not long after the Nazis crossed the Romanian/Hungarian border, they instituted restrictions on the Jewish populace (e.g. wearing the Star of David and not leaving one's home in the evening hours), and they forced the Jewish residents of Valea-lui-Mihai to move to the Oradea (Nagyvarad) ghetto. On April 9, 1944 the Nazis went street by street in Vera's town and forced the Jews into the lobby area of a local synagogue where they were separated by sex. Vera and her mother were then led to a separate room, where one of the town's midwives had been instructed to perform searches on all the women to make sure none of them were hiding any valuables within their bodies. By a stroke of luck, Vera's mother spared her this fate, and within a couple of days, her family was reunited and sent to the converted lumberyard that was to become their home. Though conditions were neither private nor sanitary, Vera's family managed to gather food during their time in the ghetto. On May 23, 1944, however, Oradea ghetto was liquidated, and Vera's family was sent to Auschwitz-Birkenau. Packed in cattle cars with 70-80 other people for the two-day journey, Vera and her family arrived at Auschwitz-Birkenau on May 25, 1944. She and her mother were separated from her father, brother, aunt, and cousin during the selections. From that day until late October of the same year, Vera and her mother struggled in the women's blocs of Auschwitz-Birkenau with terrible sanitary conditions and a lack of food, among other atrocities. In late October 1944, Vera and her mother were transported from Auschwitz-Birkenau to Teplice-Sanov, a labor camp where the two helped produce bombs. After the central bomb factory in the labor camp exploded, however, Vera and her mother were transferred to Oderan, a labor camp and bullet factory. At the end of the war, Vera and her mother were sent on an evacuation transport to Theresienstadt where they were liberated on May 9, 1945. They hoped to become reunited with Vera's father and brother upon their arrival at Theresienstadt, but quickly learned that was not to be the case. Vera and her mother remained together in the concentration camp until early June, hitchhiking around the Czech countryside in search of food and awaiting transport back to Romania. While on a train back to Romania, Vera and her mother learned that both Vera's father and brother had perished in death camps. Upon her arrival in Valea-lui-Mihai, Vera discovered she was one of the only girls from her school to return from the Holocaust, and the only girl to return with a mother.