Group portrait of an elementary school class of an Orthodox Jewish school in Budapest which met in the Kazinczy Street Synagogue. 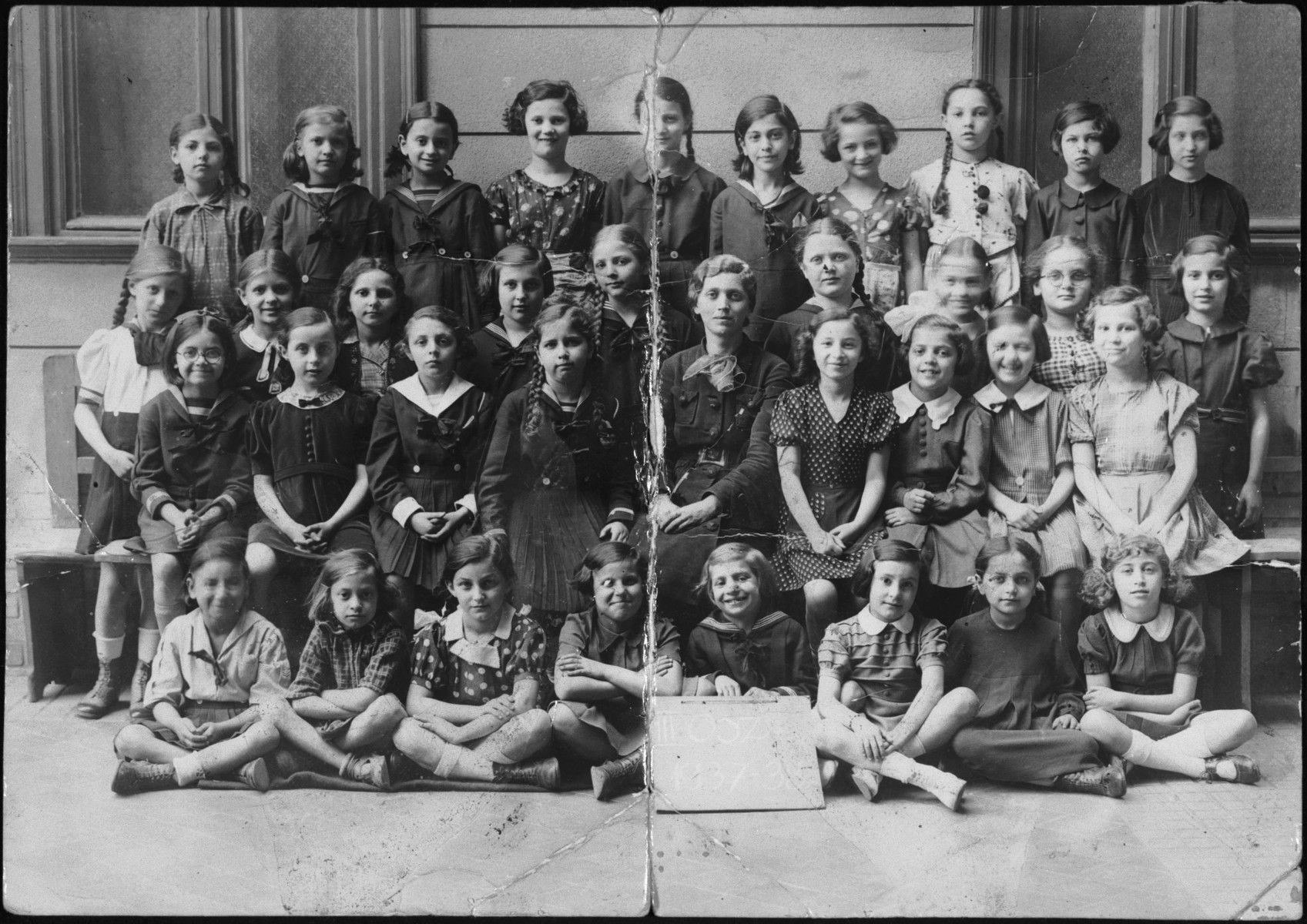 Group portrait of an elementary school class of an Orthodox Jewish school in Budapest which met in the Kazinczy Street Synagogue.

Among those pictured is Anna Roz (first row, third from the right).

Biography
Anna Nissenbaum (born Anna Roz) is the youngest child of Herman Roz and Hermina Stern Roz. Anna was born on August 5, 1929 in Budapest where her father owned a retail textile business. Anna had nine older siblings: Szeren, Marton, Armin, Jeno, Vilmos, Iren, Lilly, Elizabeth, and Andor. The family was religiously observant and Anna attended a Hungarian language Orthodox Jewish girls' school which met in the Kazinczy Street Synagogue. In 1936, Anna's father passed away from natural causes, and her older brothers took over the family business. After the start of World War II, three years later, the Roz family maintained a fairly normal life despite the government's imposition of new antisemitic legislation. Also, Anna's brother Jeno was conscripted into a Hungarian labor battalion. Later, Armin, Andor and Vilmos as well as Szeren's husband Sandor Ginsberg eventually also were conscripted into labor battalions. However, the lives of all Hungarian Jews changed radically following the German occupation in March 1944. In June 1944 Hungarian authorities ordered that Budapest's Jews move into designated buildings marked with yellow star. Anna's mother, Hermina Roz and her siblings Ilona, Iren and Erzsi obtained Wallenberg shutzpasses and moved to a safe house. Szeren managed to obtain false papers and find a hiding place for herself, her young child Ivan and Anna. When Anna, her sister and nephew arrived at the hiding place, the police was waiting for them. They immediately were rounded-up and deported to Auschwitz. They arrived in July 1944. Szeren and Ivan were killed immediately. Anna was sent to Camp C and remained there for the next three and a half months. In October she was transferred to Zitau near the Czech border to work in an airplane factory. Anna remained there until she was liberated by the Jewish soldiers of the Red Army on May 8, 1945. Anna stayed with 22 other Jewish women in the town for the next three weeks until she could return to Budapest. She returned home in June and reunited with most of her family. Her mother and sisters who had Wallenberg passes were later sent to the Budapest ghetto in autumn 1944. There, they were joined by Marton and Szeren's husband who escaped from labor battalion. Jeno also survived his labor conscription as did Andor, who had been taken from the battalion to Mauthausen. Armin and Vilmos both perished in the Soviet Union while on forced labor. Iren, who had been in a Wallenberg safe house, perished in the Budapest ghetto. After liberation the family rebuilt their textile business only to have it later confiscated by the Communists. Elizabeth moved to Canada, and Anna joined her there in 1950. They were joined shortly by Marton, Lilly and their mother, Hermina Roz. Andor, who had first immigrated to Palestine, joined them in the early 1950s, and Jano immigrated after 1956. Once in Canada, Anna Roz married Jack (Isaac) Nissenbaum, from Cernauti, Romania.