Young men in Furudal, Sweden spell out the phrase "Am Yisrael Chai" (the nation of Israel lives) with their bodies shortly before immigrating to Palestine. 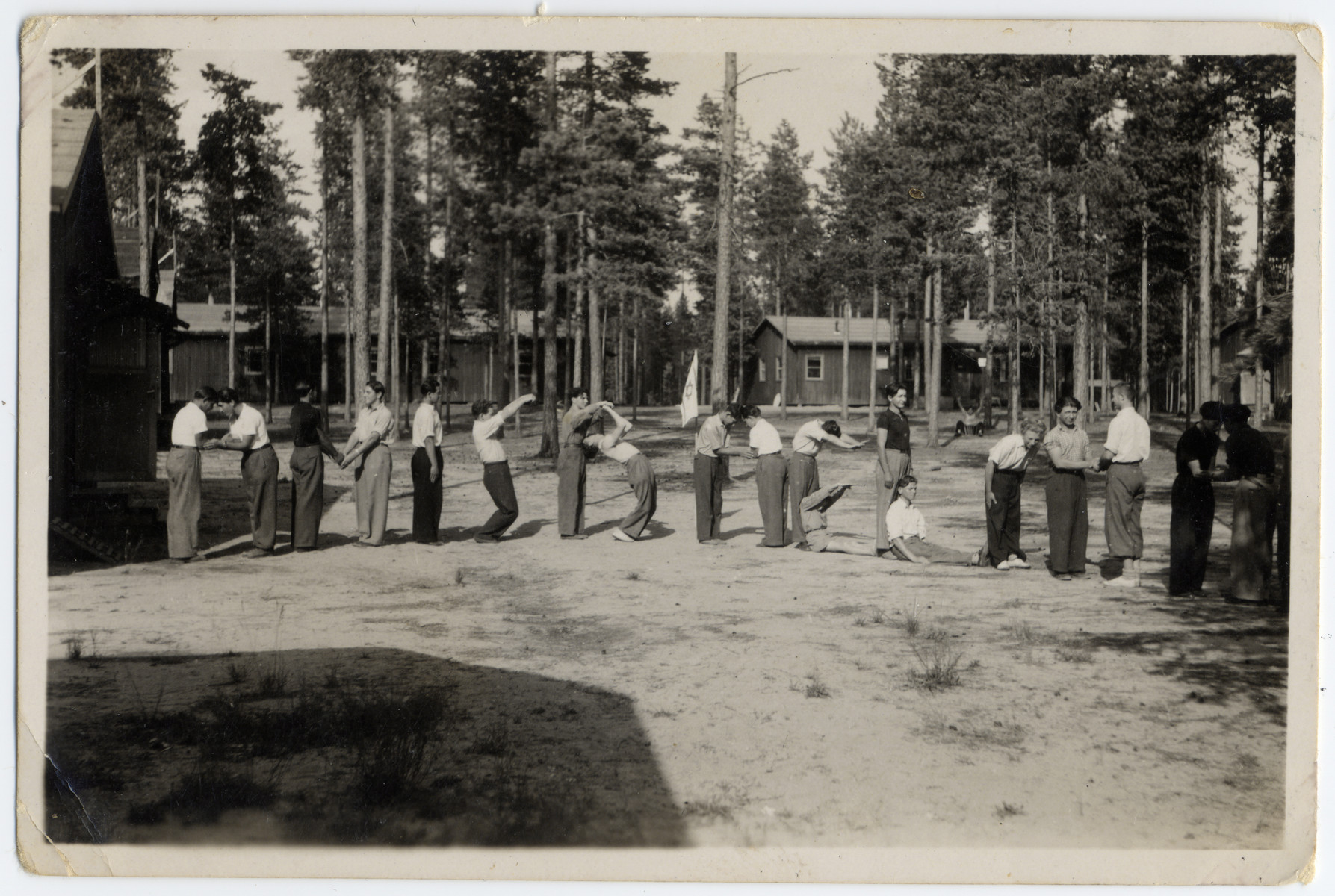 Young men in Furudal, Sweden spell out the phrase "Am Yisrael Chai" (the nation of Israel lives) with their bodies shortly before immigrating to Palestine.

Biography
Chaim Kozienicki is the son of Szulem (b. 1898) and mother Chaja Sura (b. 1900) Kozienicki. He was born on June 16, 1928 in Lodz, Poland and had an older brother Ezra Zelig, b. 1925. After the outbreak of World War II, Chaim's father fled to Brzeziny and Warsaw, fearing German repressions against men. Chaja Sura Kozienicki decided to remain in Lodz so that Chaim could continue his schooling. Once Szulem returned after a short while, Chaim became responsible for checking whether it was safe for his father to leave the apartment. In March 1940 the Kozienicki family was forced to move into the ghetto. Even on their way to the ghetto Hitler youth attacked Chaim and marched him to forced labor. The family first stayed with relatives and later moved into a wooden cabin at Drukarska 30/32 next to the barbed wire fence surrounding the ghetto. German guards amused themselves by randomly shooting into the ghetto, and as a result Chaim and his family could not use the outhouse at night, for fear of being shot. The family grew vegetables in a small plot adjacent to the hut, and Chaim continued his schooling in the ghetto and completed the fifth grade. Chaim also joined the Noar Hatzioni Zionist youth movement, despite the objections of his brother who belonged to a Communist group. The following year, though conditions in the ghetto worsened, Chaim's maternal grandfather started to prepare him for his Bar Mitzvah. When Chaim's Grandfather died of hunger, these lessons ceased. Still Chaim celebrated his bar mitzvah in June 1942 by donning tefillin for the first time. In honor of the occasion his family gave Chaim half a loaf of bread made from their rations so that he would know the feeling of being satiated. Chaim understood the enormity of their sacrifice and for days he could not look them in the eye. That summer, Chaim worked in the leather workshop. His brother Ezra and parents suffered from hunger and exhibited physical signs of malnutrition. On September 4, 1942 Chaim arrived at work as usual and noticed that many people were absent. A woman came in late and told everybody about arrests in the hospital. Chaim understood that his family was in terrible danger, because his parents were not in good health. That evening a Jewish policeman came and announced that all children, sick and old had to be rounded-up. On the fifth day of Sperre the Kozienicki family waited at home for what might come. Chaim wore his mother's shoes with higher heels to appear older. The family decided that if one of them was taken, the others would go as well. They picked all the ripe vegetables in their garden and ate a large bowl of soup while waiting for what would happen. The Kozienicki family stayed inside throughout the Aktion and by some strange luck they were forgotten by the searching Germans. Chaim continued to work in the leather resort and later worked in tapestry resort. His father then managed to transfer Chaim to a tailor factory in the hospital building on Lagiewnicka 36 where Chaim worked as a runner. Chaim continued his Zionist activities though he left Hanoar Hatzioni for the revisionist Betar movement. In August 1944 the Germans decided to liquidate the Lodz ghetto. Chaim tried to avoid deportation, but he got sick and was taken to the hospital. His mother visited him every night after work. One day she failed to come. That day she and Chaim's father were deported to Auschwitz where she perished. Chaim's father perished in 1945 in Althammer, Germany at the age of 47. On September 1, 1944 Chaim arrived in Auschwitz; from there he was transferred to the Stutthof concentration camp; than to Stolp and back to Stutthof. The Germans forced the prisoners on barks, which sailed on the Baltic Sea. Chaim was one of the few who survived.