An elderly Romani woman walks down a street accompanied by two girls. 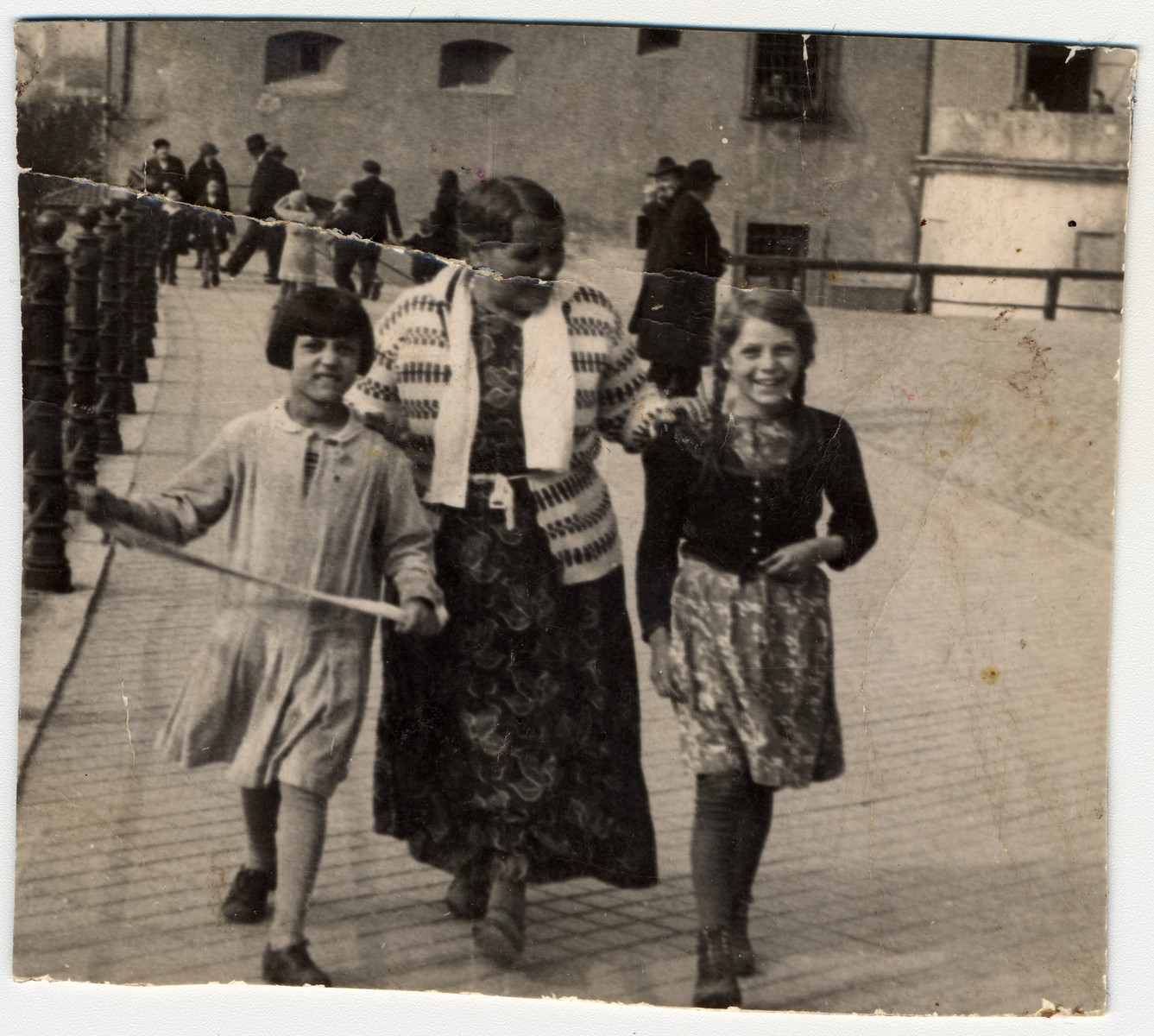 An elderly Romani woman walks down a street accompanied by two girls.

Pictured is donor's mother Theresia Seible (on the right) with her grandmother and her cousin.

Biography
Rita Prigmore (born Rita Reinhardt, later Rita Seible) is the daughter of Gabriel and Theresia (Winterstein) Reinhardt. She and her sister, Rolanda, were born March 3, 1943 in Wuerzburg, where her parents were both working in the Stadttheater. Gabriel (b. 1913) was originally from Marbach. He had studied music for a time at the Stuttgart conservatory. Together with his four brothers, Gabriel played in a band and operated a violin repair business. Gabriel had earlier been married to another woman, with whom he had a son, Rigo. Gabriel's first wife was deported in the early 1940s, and soon after, he was informed that she died in Auschwitz. Theresia (b. 1921) was from Mannheim. She attended a convent school as a teenager and at sixteen joined the Wuerzburg Stadttheater, where she performed as a singer and dancer. In 1941 several members of Theresia's family were brought to Gestapo headquarters where they were forced to sign sterilization authorization forms. They were threatened with deportation if they refused. Before Theresia's sterilization was scheduled she made a conscious decision with her boyfriend, Gabriel, to get pregnant. By the time she was called in for the procedure, she was three months pregnant with twins. When this was discovered by the racial hygienists, she and her family were detained and word was sent to Berlin to determine what should be done. The response was the Theresia should be allowed to continue the pregnancy on condition that the babies would be turned over, upon their birth, to the clinic at the University of Wuerzburg. There, Dr. Werner Heyde, professor of neurology and psychiatry, and a key member of the Nazi euthanasia program, was conducting research on twins. Apparently, Dr. Joseph Mengele also took a personal interest in the Sinti twins. Throughout her pregnancy, Theresia and Gabriel were under constant surveillance. No longer permitted to perform at the Stadttheater, Theresia took a job as an usher and Gabriel went to work as a delivery man for a pharmaceutical company. The twins were born in the presence of Dr. Heyde at the University of Wuerzberg. They were allowed brief stays at home with their parents, but generally were confined to the clinic. On one notable occasion, the twins were released to their parents for a propaganda photo shoot of Sinti parents strolling with their babies along the Domstrasse in Wuerzburg. In the second week of April, Theresia and Gabriel received notices to report for deportation. The babies were not included, and Theresia immediately went to the clinic to see them. When she arrived she was told she could not see them, but Theresia pushed her way in. She found Rolanda lying dead in a ward with a bandaged head, the victim of experiments with eye coloration. Hysterical at this discovery, Theresia grabbed the surviving twin, Rita, and fled. Later that day or the next, Rita was removed from her parents and taken back to the clinic. Theresia and Gabriel did not see her again for another year. Within a few days of these events Rolanda's body was released to her parents and they arranged for a proper Sinti funeral. A week later Theresia was forcibly sterilized. Gabriel lost his job with the pharmaceutical company, but was not subjected to sterilization. In 1943 several members of Theresia's extended family, including her younger brother, Otto Winterstein, and her uncle, Fritz Spindler, were deported (both survived). In April 1944 Theresia mysteriously received a letter from the German Red Cross clinic in Wuerzburg instructing her to come and pick up Rita. The Reinhardt family remained together until 1946 or 1947 when Gabriel's first wife, who had in fact survived the war, returned to Germany. Gabriel decided to go back to her and had his second marriage to Theresia annulled at a U.S. court in Stuttgart. Rita remained with Theresia and did not meet her father again until 1959. In 1962 Theresia was remarried to an American soldier, who died in 1972. Rita suffered numerous physical ailments (including severe headaches and periodic loss of consciousness) throughout her youth and adulthood that she and her mother attribute to her treatment at the Wuerzburg clinic during the Nazi period. Rita married at 21 and soon after gave birth to a son and daughter. She and her family moved to the U.S. in the 1970s. After several years, Rita divorced her husband (and ultimately left her children, as well) in order to move back to Germany to help her mother run a Sinti human rights organization that sought to raise consciousness about the fate of Roma (Gypsies) during the Holocaust. Rita lives now in Wuerzburg.