A Greek Jewish man stands next to his automobile parked in front of the Temple of Hephaestus (Thiseion). 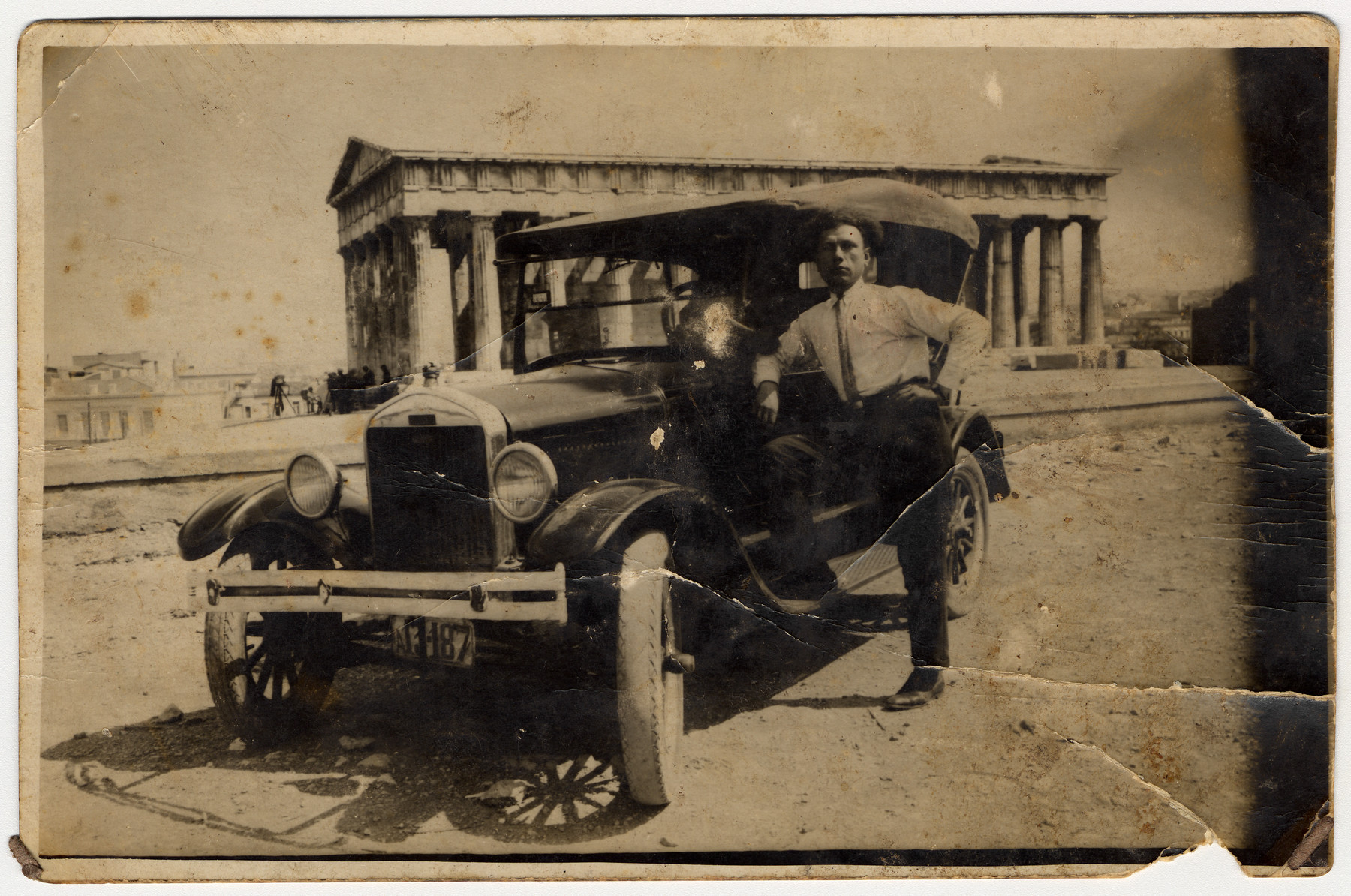 A Greek Jewish man stands next to his automobile parked in front of the Temple of Hephaestus (Thiseion).

Pictured is Elia Ackos, the uncle of the donor.

Biography
Mary Ackos (Akou) (now Mary Calof) is the daughter of Menahem and Rosa Vitalli Akou. She was born on May 21,1939 in Athens Greece and was the fourth child in a family of five children. Her brother Simantov (Samuel b.1931) was oldest followed by Esther (Esther Winthrop b. 1935), Havoula (Evelyn Ettinger b. 1937), Mary and Bertini ( Tina Bergstein b. 1941). Menahem, a veteran of World War I, was a businessman and taxi owner.

On April 6, 1941 the Germans and Italians, supported by Bulgarian, Hungarian and Romanian units, attached Greece. Germany and Italy jointly occupied Athens. Though Jews did not have to wear yellow stars, they had to carry identification papers listing their religion. The Akou family listed illegally to BBC on a radio they kept hidden in a well. After Italy surrendered to the Allies on September 8, 1943, Germany occupied all of Greece. Menahem joined the partisans and placed his wife and children into hiding in the basement of the home of Mrs.. Sayiounu, a friend of Rose's sister in the suburb of NEA SMYRNA. They had hidden here on and off for three years during the war. Eventually Menahem returned from the partisans and the family went back to their home. A Nazi general announced via the Greek archbishop that no harm would come to the Jewish community if all the men reported to the synagogue for one hour every Saturday. Then on March 25, 1944 Germans locked everyone inside. Samuel who was selling cigarettes on the black market outside the building witnessed what was going on and rushed home to tell his mother. She gathered up the children and with Samuels' help they returned to their hiding place with Mrs.. Sayiounu. The Germans transported everyone who was in the synagogue to a small camp called Haidiri and from there deported them to Auschwitz. Menahem Akou perished in Auschwitz as did many other family members.

While in hiding, Samuel supported the family by trading with peasants on the black market for food. After the liberation of Athens in October 194, the Akou family returned home to find a Nazi collaborator had taken over their house. They were only given back one room and the cellar. Luckily Menahem had been able to save his taxi cab from German confiscation by disassembling it and hiding different parts with different friends. Rosa and Samuel reassembled the cab, and though couldn't drive themselves, restarted the taxi business. However live was hard and there was little food. Rosa had to put Mary and Esther in an orphanage for three years which is what it took to put some type of life in order. She visited them each weekend and reassured them this was not a permanent solution. Eventually they came to the United States of America and settled in St Paul, MN