Jewish refugees crowd together aboard the Exodus 1947. 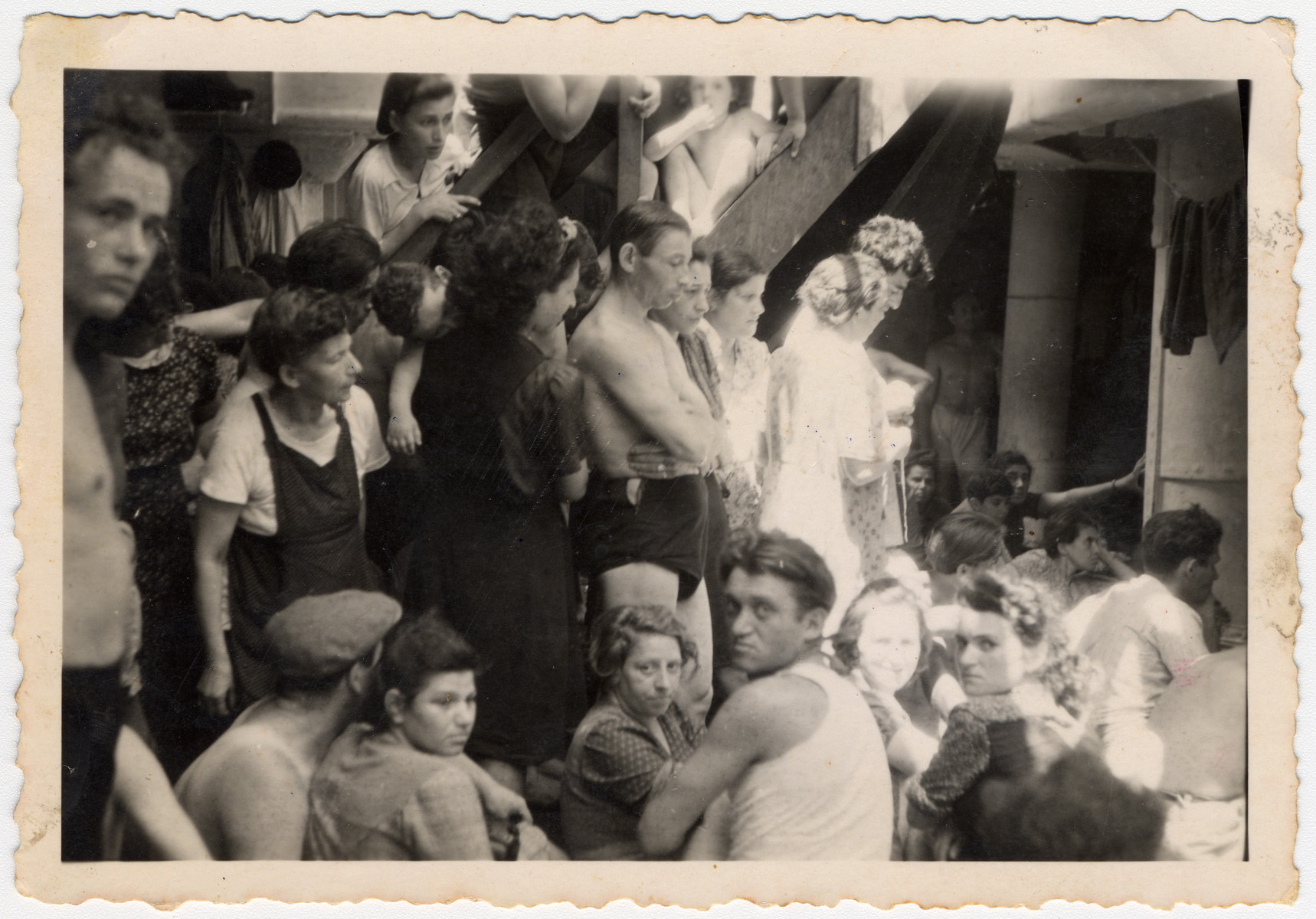 Jewish refugees crowd together aboard the Exodus 1947.

[Source: "Poppendorf statt Palastina" (The Haganah Ship Exodus 1947), an online exhibition by Henrik Jan Fahlbusch et al.
Biography
Giza Golda Rozenblum-Schtoltzberg (now Wiernik) is the only child of Mordechai Rozenblum-Schtoltzberg and Chaja Tema Bitman. She was born on August 2, 1917 in Jamna, Poland, near Nadworna where her parents owned a grocery store and a summer lodge. Giza graduated from high school in 1935. After the start of World War II, Jamna fell under Soviet occupation, but life did not change much for Giza or her parents. They still managed their small hotel, and Giza worked in the local public health office in Stanislawow. In June 1941 invaded the Soviet Union and occupied eastern Poland. First, the Hungarian Army entered Jamna, and Giza's father was arrested for hiding Hungarian Jews. Soon afterwards, the Germans took over. One soldier cut off the beard of Giza's father and later her mother was taken to Delatyn and murdered with the rest of the Jewish women. Giza and her father survived one "Aktion". During the following "Aktion", Giza managed to hide in the forest, but her father was rounded-up and killed. A Ukrainian priest Fr. Lucziw, a friend of the family, gave Giza a birth certificate in the name of Maria Jaworska. Giza finally left Jamna, traveled to Lvov where she worked in the "Appel" photo studio, which had belonged to the Jewish Appel family before the war. A Ukrainian policeman, Prudyus, took over the business, while hiding the Appels. He told Giza that it was her duty to protect the family. Most of the clients in the photo shop were Germans who often paid with their ration cards. This allowed Giza to bring food to the hiding Jews. She never revealed to either the Appels or her employer that she too was Jewish. In the spring 1942 Giza met an acquaintance from back home, who denounced her to the Gestapo. Before they could arrest her, she registered (still pretending to be an Aryan) in the "Arbeitsamt" (labor department) to work in Germany. She was transported to Dresden where she worked for the Zeiss Ikon factory. There she met her future husband, Reuwen Goldberg, who was posing as a Byelorussian under the false name of Roman Wiernik. It took a long time for Reuwen and Giza to trust each other and admit that they were both Jewish. On August 24, 1944 they married in Hermsdorf near Dresden. Their son Alexander was born on April 15, 1945. During the liberation period the Wierniks suffered terrible bouts of hunger. They started to walk eastward and reached Legnica (Liegnitz), where they met Jews returning from the Soviet Union, and then decided to flee to the west. In March 1947 they reached Ziegenhain and in April arrived in the Schvebde DP camp. Reuwen and Giza decided to immigrate to Palestine, and on July 11, 1947 they boarded the "President Garfield", which was to take them to Palestine. The ship was renamed "Exodus". When they arrived at Haifa harbor, British troops boarded the ship and transferred the passengers onto three troop ships headed back to Europe. For an entire month the ships anchored at a French port suffering terrible conditions. On September 8, 1947 the British finally took the Jewish refugees back to Germany. Giza, Reuwen and their son Alexander were interned in the Amstau DP camp in Germany. In February 1948 they finally were allowed to land in Palestine, and their daughter Ronit was born the following year.