A Jewish man and woman walk down a street in Antwerp the winter before the German invasion. Belgian soldiers can be seen in the background. 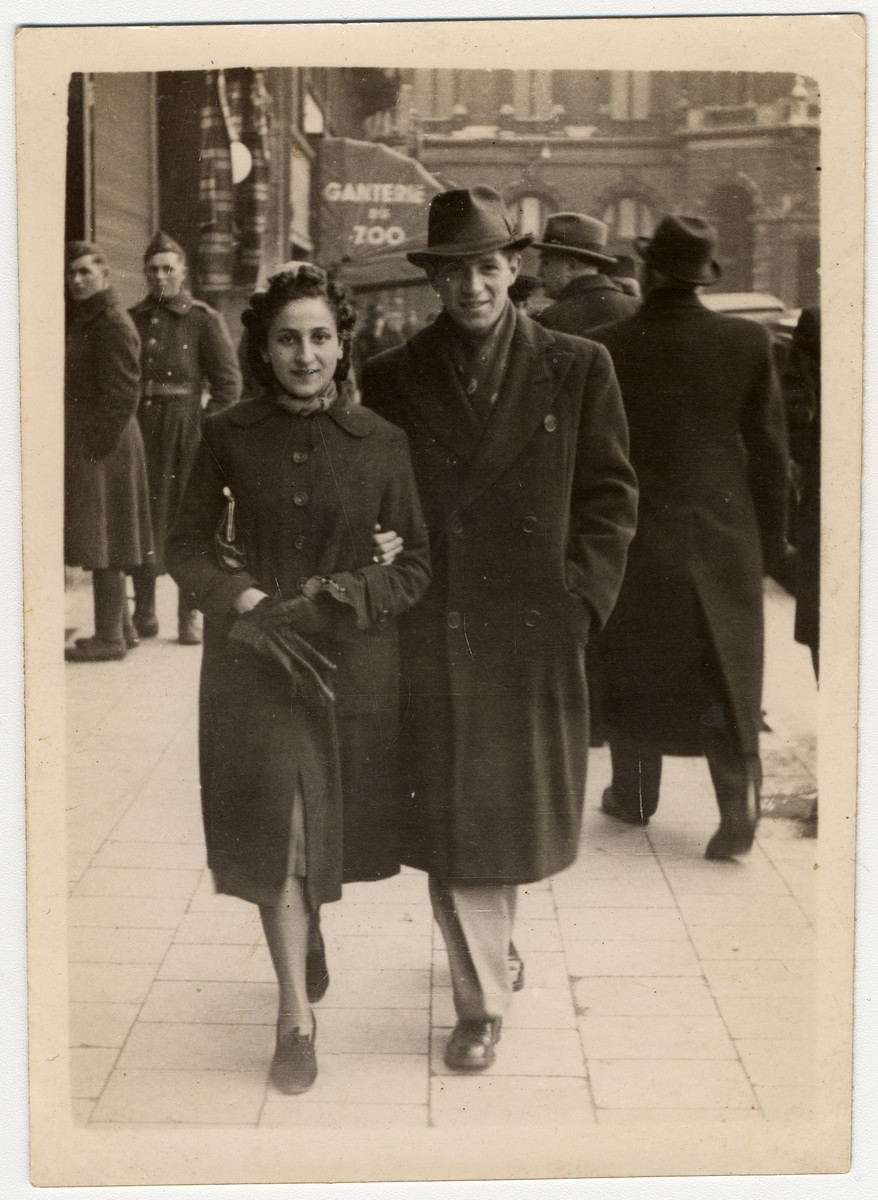 A Jewish man and woman walk down a street in Antwerp the winter before the German invasion. Belgian soldiers can be seen in the background.

Pictured are Hans and Sonya Tragholz.

Biography
Marcel Bervoets (born Marcel Bernard Tragholz) is the son of Hans Tragholz and Sonya Yvonne Leibovitche Tragholz. Hans was born on August 26, 1910 in Vienna. In September 1938 he fled Nazi Austria for Antwerp, Belgium where he met Sonya. Sonya was born in Romania on July 5, 1920. She, her parents and sister immigrated to Belgium in the mid-thirties to escape anti-Jewish actions in Romania. Her mother Lora Avramescu Leibovitche obtained United States citizenship for herself and her two daughters after having spent time there for recuperation. However, she could not obtain permission for her husband also to immigrate, and so the family remained in Belgium when Germany invaded in May 1940. Following the May invasion, the Belgians deported Hans and his brother Otto to France as enemy aliens. They spent time in the Saint Cyprien, Argeles-sur-Mer and Gurs internment camps before escaping and returning to Antwerp. Hans and Sonya married on June 17, 1941, and Marcel was born the following October. Hans worked as an accountant and art designer and Sonya as a fashion designer. In July 1942 when Marcel was only nine months, the Germans began a round-up of Jews in Antwerp. Hans immediately fled to Charleroi to join a small resistance group. He was denounced one week later and arrested on July 31, 1942. At the same time, Sonya received a summons from the police. When she, together with Marcel, reported to the local station, an officer who recognized her and told her to call her mother and grandmother. Once they were together, he instructed them to immediately leave by the back door and then spend no more than one night in their home in Borgerhout. The officer explained that the Germans accompanied by Belgian collaborators would be searching all their homes in the coming days. Sonya and Marcel hid separately from her family feeling it would be easier and safer to hide in small numbers. From July 1942 until August 1944, Marcel and his mother hid in hangars, bicycle sheds, under a kitchen sink at an acquaintance's home, as well as in pigeon houses, old attics, and abandoned cellars. Hans' resistance unit occasionally helped them move from one place to another. American troops liberated Antwerp in August 1944. Sonya received word, however, that Hans had been perished in Buchenwald at the time of liberation, April 1945. Following his arrest in 1942, he was sent to the Atlantic Wall, a small slave labor camp in northwest France, Malines and then Auschwitz on convoy XVI. From there he was sent to Jawischowitz, back to Auschwitz and then to Buchenwald and Ohrdruf. His siblings Otto, Ernst, Amalia and their spouses also perished as did Sonya's father, Herman Leibovitche. He was arrested by the Gestapo on July 23, 1942 while en route to the Swiss Legation in Brussels to pick up visas for the United States. After being imprisoned in Breendonck and Malines, he was deported to Auschwitz on September 15, 1942 and killed on arrival. In 1953, Sonya married Francois Omer Bervoets, who had belonged to a resistance unit that gave assistance to Jews in hiding in and around Antwerp. Omer participated in the liberation of Antwerp with the Allied troops and was on many occasions honoured by the Nation for his acts of bravery. He officially adopted Marcel in 1958.