Group portrait of the children and teachers in the Tarbut school in Belzyce. 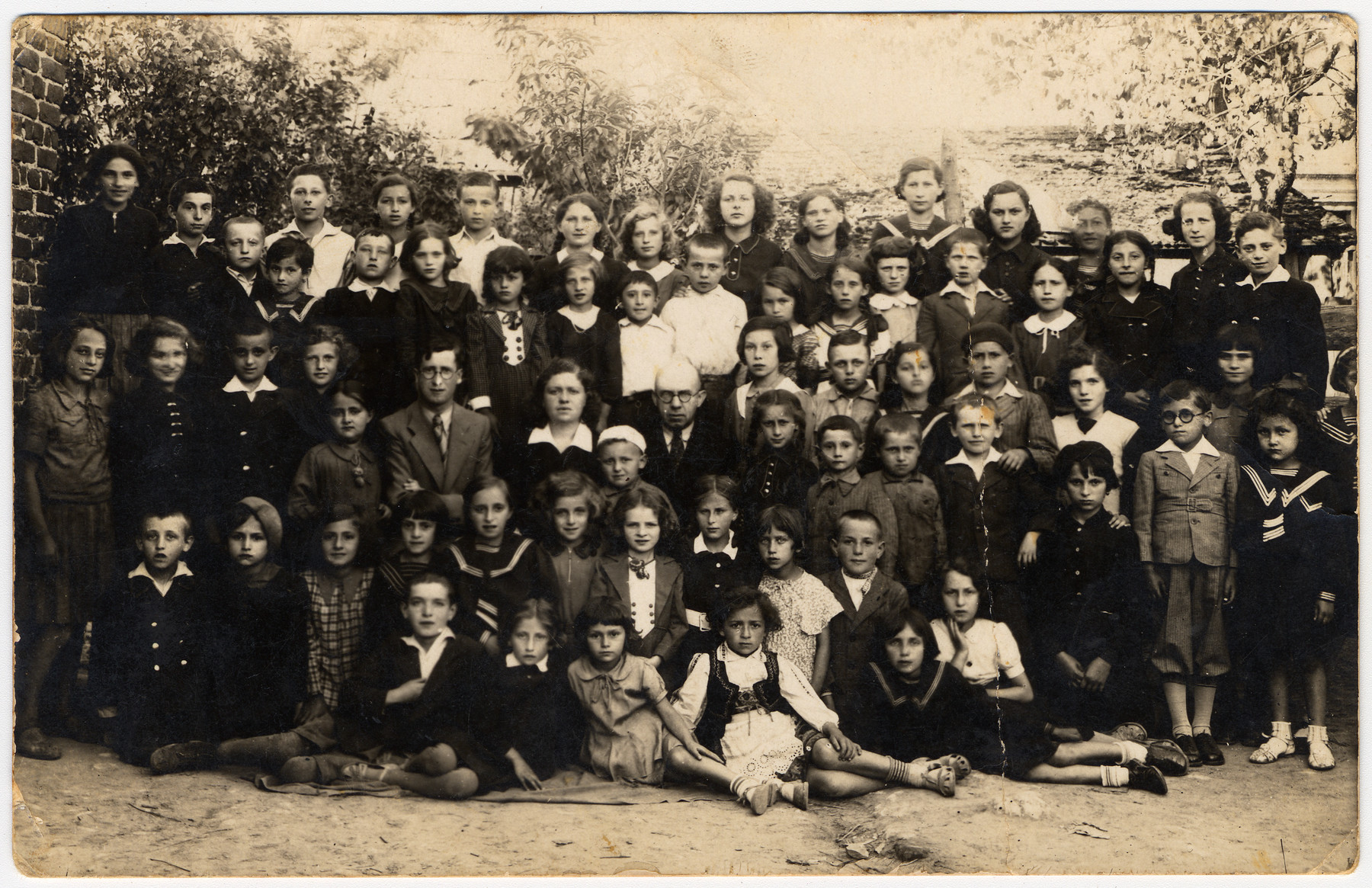 Group portrait of the children and teachers in the Tarbut school in Belzyce.

Biography
Sara Kam (born Sara Wiener) is the daughter of Moshe and Frida-Rivka Muszkat Wiener. She was born on June 25, 1927 in Belzyce in the Lublin district of Poland where her father owned a mill, an oil press and part of a forest. Sara had one younger sister, Dina, born in 1930. Sara and her family were staunch Zionists. She attended a Hebrew speaking Tarbut School and belonged to Gordonia and Hanoar Hazioni. The family had a country home in the village of Chrzanow where they lived in the summer. When the Germans arrived, they confiscated all their property and forced them to live in a small ghetto established in a couple of buildings around the synagogue and old Jewish cemetery. There were rumors that the holders of labor cards would not be expelled and could obtain food stamps. Sara's father worked uprooting trees, and she worked as a cowhand. In the fall of 1942 the Gestapo deported most of the Jews from the Belzyce district to extermination camps and turned the ghetto into a compulsory labor camp. Sara's father was transferred to the Poniatow concentration camp where he worked as a carpenter until November 3, 1943 when all the prisoners were shot. The rest of the family stayed in Belzyce. In the labor camp Belzyce, Sara worked at the construction of a railway track, but her mother was too infirm to work. Then on May 8, 1943 the Germans shot all the elderly, infirmed, women and children and buried them in a mass grave behind the synagogue. Only 50 girls and young women, including Sara survived. She was taken to the Budzyn concentration cam and later incarcerated in Belzyc,Wieliczka and Auschwitz. In October 1944, she was transferred to Taucha near Leipzig where she remained until shortly before her liberation by the Soviet army at the age of 18 somewhere in a forest near the Elbe River. When the war ended, she and four other girls returned to Poland in the hope of finding surviving relatives. After learning that no one else survived, she joined other a group young people in Kibbutz Lanegev in Lublin. Together, they left Poland the following year the Hesse Lichtenau displaced persons' camp in the U.S. zone. She then went to Weilheim near Munich. The following year, in late June 1947 she and other DPs traveled by made their way to Marseilles. On the night of the 9th and 10th of July 1947 they climbed into covered trucks and traveled to Port-de-Sete and boarded the Exodus, illegally bound for Palestine. When they arrived in Haifa after a week at sea, British soldiers transferred them to the Runnymede Park and sent them back to Europe. They were brought by train to Hamburg Germany and taken to new displaced persons' camps in Poppendorf and later Emden. On March 1948 she returned to Marseilles with documents claiming to be Sara Gurfinkel. She boarded The Transylvania and sailed to Palestine. Sara Wiener wed fellow Exodus passenger, Chanina Kam in Tel Aviv on October 1, 1952.

Chanina Kam is the son of Noach Kam and Malka Pomp Kam. He was born on January 1, 1928 in Komarow, Poland where his father was a merchant and laborer. He had two younger brothers Mordechai (b. 8/10/30) and Moshe (b. 3/1/36). The family remained in school until the start of World War II. Chanina attended school there and belonged to the Zionist movement Hanoar Hatzioni. On October 3, 1939 they escaped to Vladimir-Volynsk in Western Ukraine and the following month they were deported to the Ural Mountains. From 1940 until June 1941 his father Noah worked in a marble factory in Medviediovka. He earned barely enough to survive, and the family had to sell their personal belongings. Shortly after the German invasion of the Soviet Union, Noach was mobilized for to the Red Army. Chanina's mother was left with the three young children and no government support. For the next two years she worked loading coal in a railroad depot. Only July 1943 Noach was transferred from the front line because to a forest to prepare timber for the front fortifications. Noach's work was very hard, and he received little food. As a result, he became ill and when the rest of the family visited him, they barely recognized him. When he recovered and gained weight, he was released from the army and allowed to move to Western Ukraine. Malka found a job as a cleaning woman. To avoid perishing from starvation they traded on the black market and slept on the floor in the corner of a kitchen of a generous Russian family. Despite all these difficulties Chanina managed to finish high school and start the Technological Institute of Engineering in Chelyabink. In June 1946 they returned to Lublin and then continued West with the help of the Bricha staying in displaced persons' camps in Ebensee, Cham and Pocking. In January 1947 he attended an agricultural school in the Anton Bartel farm, and in July 1947 he went to France to embark on the Exodus in an attempt to immigrate illegally to Palestine. After the British returned the passengers to Europe, Chanina was interned in the Poppendorf and Emden displaced persons' camps. November 20, 1947 Bricha brought them back to Palestine and immigrated on board the Transylvania with passport for Henryk Klugman. Finally arrived in Haifa on January 5, 1948. Though all of Chanina's immediate family survived, 22 other close relatives were murdered, and Chanina's brother Mordechai was killed in Israel's War for Independence on July 11, 1948. Chanina married another Exodus passenger, Sara Wiener, in Tel Aviv on October 1, 1952.