Photograph of the donor with her parents and younger sister before the war. 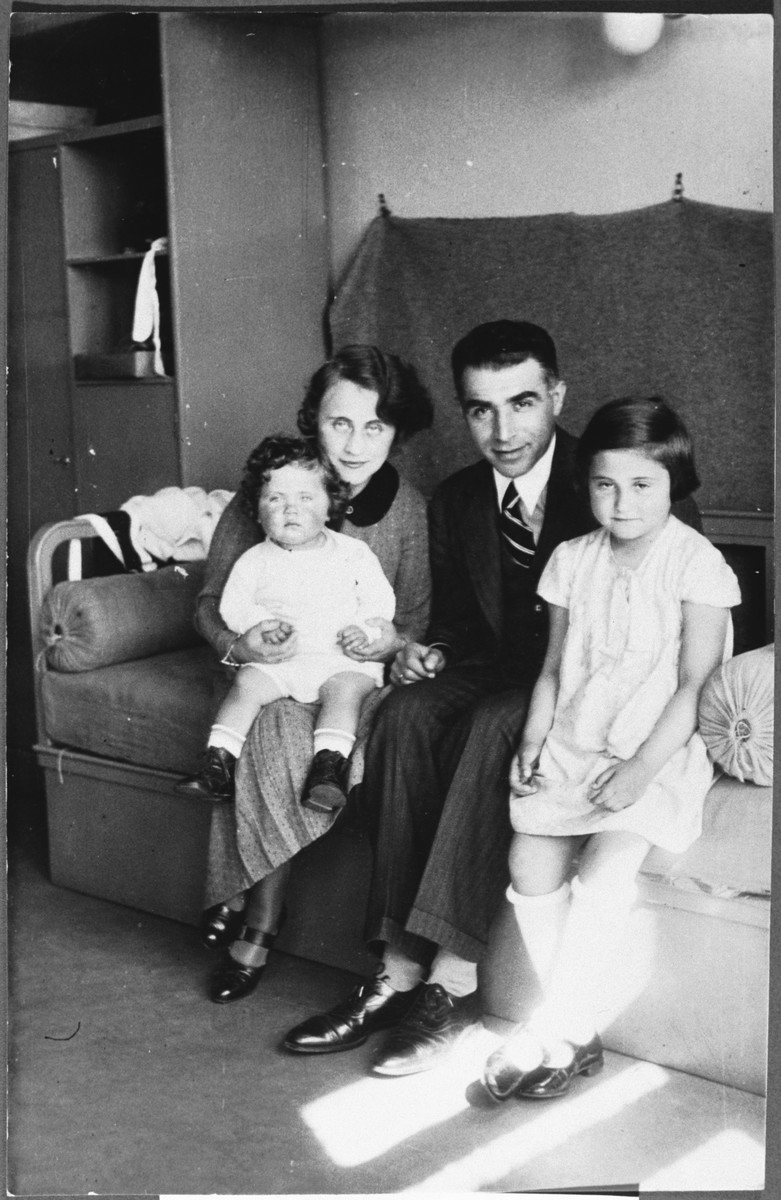 Photograph of the donor with her parents and younger sister before the war.

Biography
Maud Stecklmacher (now Michal Beer) is the daughter of Friedrich (Bedrich) ( b. December 7, 1898) and Kaethe (Katharina) Steiner (b. March 26, 1908). She was born on April 7, 1929 in Prostejov, Czechoslovakia, as were her parents. Her father worked in a wholesale notions business founded by his father Jakob Stecklmacher. Maud's mother studied in a business school and occasionally helped in the store. Maud had one younger sister Karmela, born March 1, 1934. The family was not religious but they celebrated the Jewish holidays and were ardent Zionists. Maud's father and grandfather belonged to Bnai Brith, and her mother and grandmother belonged to WIZO. When the Germans prohibited Jewish children from attending school in 1940, Maud had finished five years of Czech elementary school. Afterwards, she continued to study in small groups of Jewish children. The family became subject to numerous anti-Jewish regulations. They had to obey curfews and wear the yellow star, and her family's business was confiscated as were many personal belongings. Maud maintained some semblance of normalcy through meetings of the Zionist group, "Techelet Lavan". While she was on her way to a meeting, she met Hermann, a young man who was twelve years older. He became her first boyfriend. He had studied engineering at the Technology Institute in Brno. Once the Stecklmacher family eventually was moved into the same flat where Hermann lived, Maud was able to see him frequently in spite of her parent's objections. In 1942 the men and youths of Prostejov were sent to a labor camp in nearby Zarovice including Maud's father and Hermann. The men would return dirty and tired on Saturday afternoon to spend Sunday at home. Maud was able to correspond secretly with Hermann during that time. By June 1942, the Germans began deporting Jews from their region to Theresienstadt. Hermann and his family left, and Maud went to the railroad station to bid him farewell. Four days later on July 2, 1942 her family crammed into cattle wagons for the same trip. Maud wore three or four dresses to save weight in their suitcases. Maud separated from her family in Bohusovice and walked the remaining distance to Terezin with her luggage and rucksack where she arrived to the "Schleuse", a quarantine of sorts that once had been a bakery. When she realized how difficult it would be to find Hermann, Maud was seized by uncontrollable weeping. Luck was with her and three days, she located Herman and managed to send him a letter telling him that she was there. Maud was assigned to Q802 barracks where mothers and children were accommodated. Her mother was sent to work dispensing mattresses to the inhabitants of the ghetto. Sometimes Maud went in her place. Her father moved into the "Sudeten Kasserne" with the other men, and her grandparents were in a bloc for the elderly. Eventually Maud was summoned to work in the Jugendgarten which was outside the ghetto and provided a little extra food for her. In the evenings she often met Hermann. Residents of Terezin lived in fear of being sent on transports to the East. Since Maud's sister Karmela contracted scarlet fever, her family was exempt for a time. Maud continually feared that Hermann would be deported. Elderly residents were deported from the camp on transport BX. Hermann's mother, who was 65 years-old, was included on the transport, and Hermann insisted on accompanying her. Maud later learned this transport went to Treblinka. She received a last letter written on the train before his departure. After Hermann's departure Maud moved to barracks L410 to live with girls her own age. Although the manager was a Communist, she never was able to convince Maud of her leanings; instead Maud befriended members of the Hehalutz movement.

Maud's mother was worked with mica, a natural plastic which was split and used for insulation material in the war effort. Maud's father first worked in the cemetery digging the mass graves. He later was assigned to process the personal effects of the newly arrived Jews and then in the cultural affairs office. Through his ties to the ghetto leadership, he learned about the Final Solution and committed suicide on May 31, 1943. In September and October 1944, 11 transports were sent to Poland with about 20,000 people. The wives of these men were told that they could follow them in order to build a new labor camp. Since Maud's father was not alive, she stayed behind while most other women and children followed. These transports were sent to Auschwitz. Another time, Maud's suitcase was sent to Auschwitz, and she was pulled off the train at the last minute by Mr. Kurszavy who was in charge of the agriculture department who said he needed her and other young girls to work the fields. Maud and her mother and sister remained in Terezin until their liberation when they returned home to Prostejov. Her sister began school, and Maud became a counselor for a Zionist Hachshara preparing for immigration to Palestine. Maud, her mother and sister left Italy in the ship Campidoglio and arrived in Israel in March 1949. Maude went to Kibbutz Ginezar, her sister to Kibbutz Kfar Maccabi and her mother who was by then 41 years old went to Kibbutz Givat Chaim.