Nazi officers stand in a row as two officers salute each other during the dedication of the new SS hospital in Auschwitz. 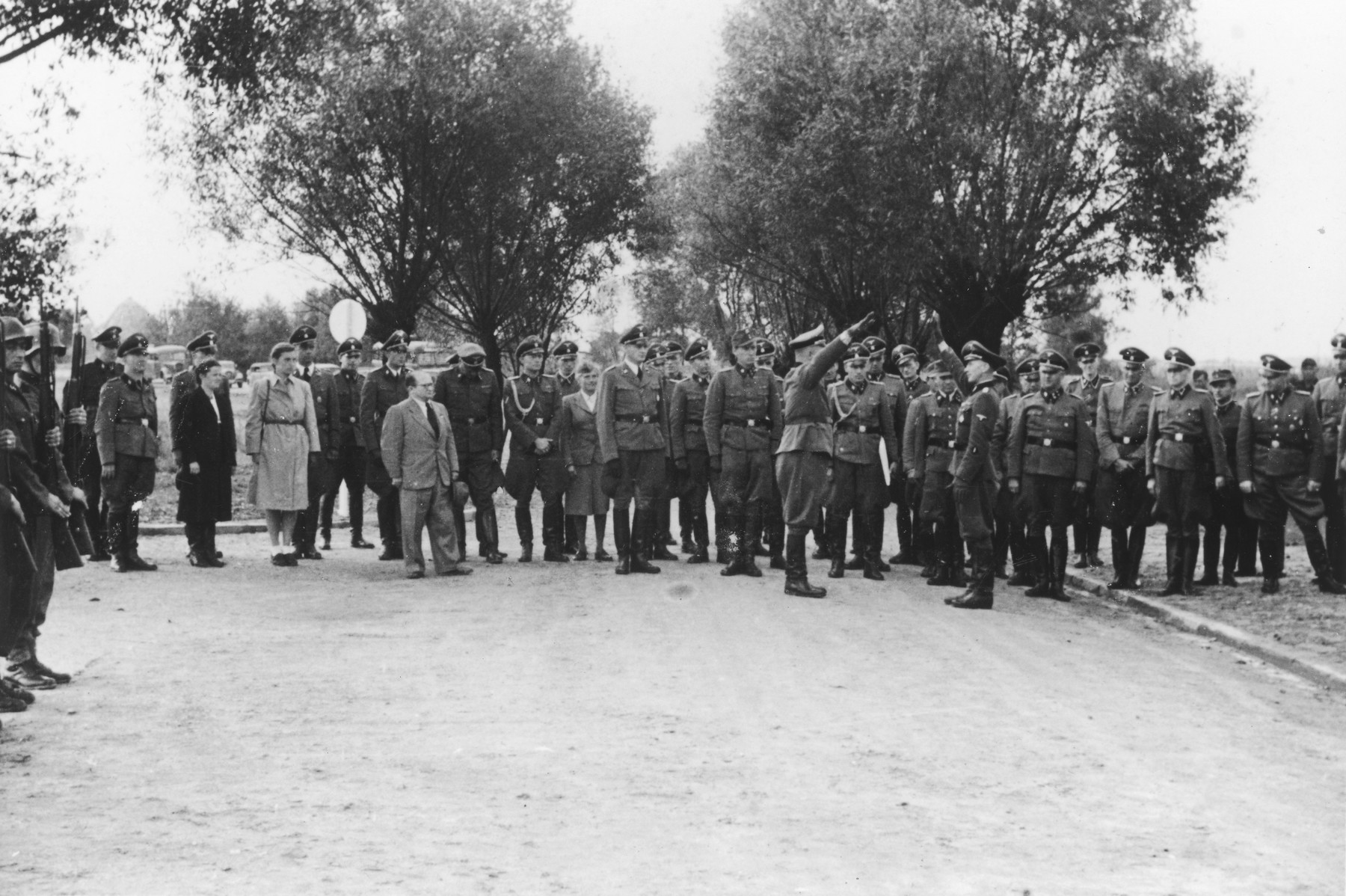 Nazi officers stand in a row as two officers salute each other during the dedication of the new SS hospital in Auschwitz.

The album includes both documentation of official visits and ceremonies, as well as more personal photographs depicting the myriad of SS social activities. The earliest photos show the June visits first of Lufwaffe General Erich Quade and of SS Obergruppenfuerhers Oswald Pohl and Ernst -Heinrich Schmauser. Pohl came to Auschwitz to inspect new construction in preparation for the "Judenaktion" (i.e. arrival of Hungarian Jews) and commented on the insufficient camouflaging of the crematoriums and gas chambers. Many of photographs are taken at Solahuette, an SS resort some 30 km south of the main camp of Auschwitz. Included in these photos are scenes of a late July gathering in honor of Rudolph Hoess and a day trip for SS Helferinnen (young SS women who worked as communications specialists) on July 22, 1944. Several pages depict a ceremony surrounding the groundbreaking of the SS-Lazarette (troop hospital) at the entrance to Birkenau, which took place most likely in mid-September. The Lazarette was later bombed by the Allies on December 26th, 1944, killing 5 members of the SS. The album also contains photographs of their funeral. Chronologically the final photographs show the lighting of a Yule tree and a hunting trip the first week of January. Only two weeks later, the SS began evacuating the camp, and the Soviet Army liberated the remaining prisoners on January 27, 1945.
See https://encyclopedia.ushmm.org/content/en/article/auschwitz.
See Also "Auschwitz Main Camp" in Encyclopedia of Camps and Ghettos, Volume 1 Part A.
Biography
Karl Hoecker was born in Engershausen, Germany, in December 1911, as the youngest of six children. His father, a construction worker, was killed in World War I, and his mother struggled to support the family. Hoecker, who worked as a bank teller in Lubbecke, joined the SS in 1933 and the Nazi party in 1937. He married in 1937, had a daughter in 1939 and, in October 1944, a son. Upon the outbreak of war, Hoecker was assigned to the Neuengamme concentration camp. In 1943, he became the adjutant to the commandant at Majdanek-Lublin during the Operation Reinhardt mass deportations and murders. When Sturmbahnführer Richard Baer became the commandant of Auschwitz in May 1944, Hoecker was also reassigned to the camp, again in the position of adjutant. Baer had been working as the deputy of Oswald Pohl, the head of the WVHA (SS-Wirtschafts-Verwaltungshauptamt) in Berlin, and had never before worked in a camp. Hoecker remained at Auschwitz until the evacuation, then moved with Baer to command Dora-Mittelbau until the Allies approached. He escaped the camp before it was taken and was captured by the British while posing as part of a combat unit near Hamburg. As Allies had an erroneous description of him, Höcker spent only one and a half years incarcerated in a British prisoner of war camp and was released at the end of 1946. Until prosecutors began looking for him in the wake of the Eichmann trial, no one came for Karl Hoecker. He resumed his life in Engershausen with his wife and two children. He turned himself in for a de-Nazification trial in 1952 and was sentenced to serve nine months for membership in the SS, a criminal organization. He did not have to serve it, thanks to a 1954 law of freedom of punishment. He took up gardening in his spare time, and became the chief cashier of the regional bank in Lubbecke, only losing his job during the pre-trial investigations for the 1963-1965 Frankfurt Auschwitz Trial, in which he was a defendant. The judges ruled that Hoecker was guilty of aiding and abetting the murder of 1000 people on four separate occasions. They weighed the facts that he had been a model citizen after the war, had voluntarily asked for denazification in 1952, and they could only find proof that he had been a desktop functionary. The court determined that Höcker had never been proven to be at the ramp. He was sentenced to only 7 years, but time served was deducted and Höcker was released on parole in 1970. He regained his job as a Chief Cashier of the regional bank in Lubbecke. Karl Hoecker died in 2000 at age 88.