Dutch soldiers play cards inside a barracks during the Phony War. 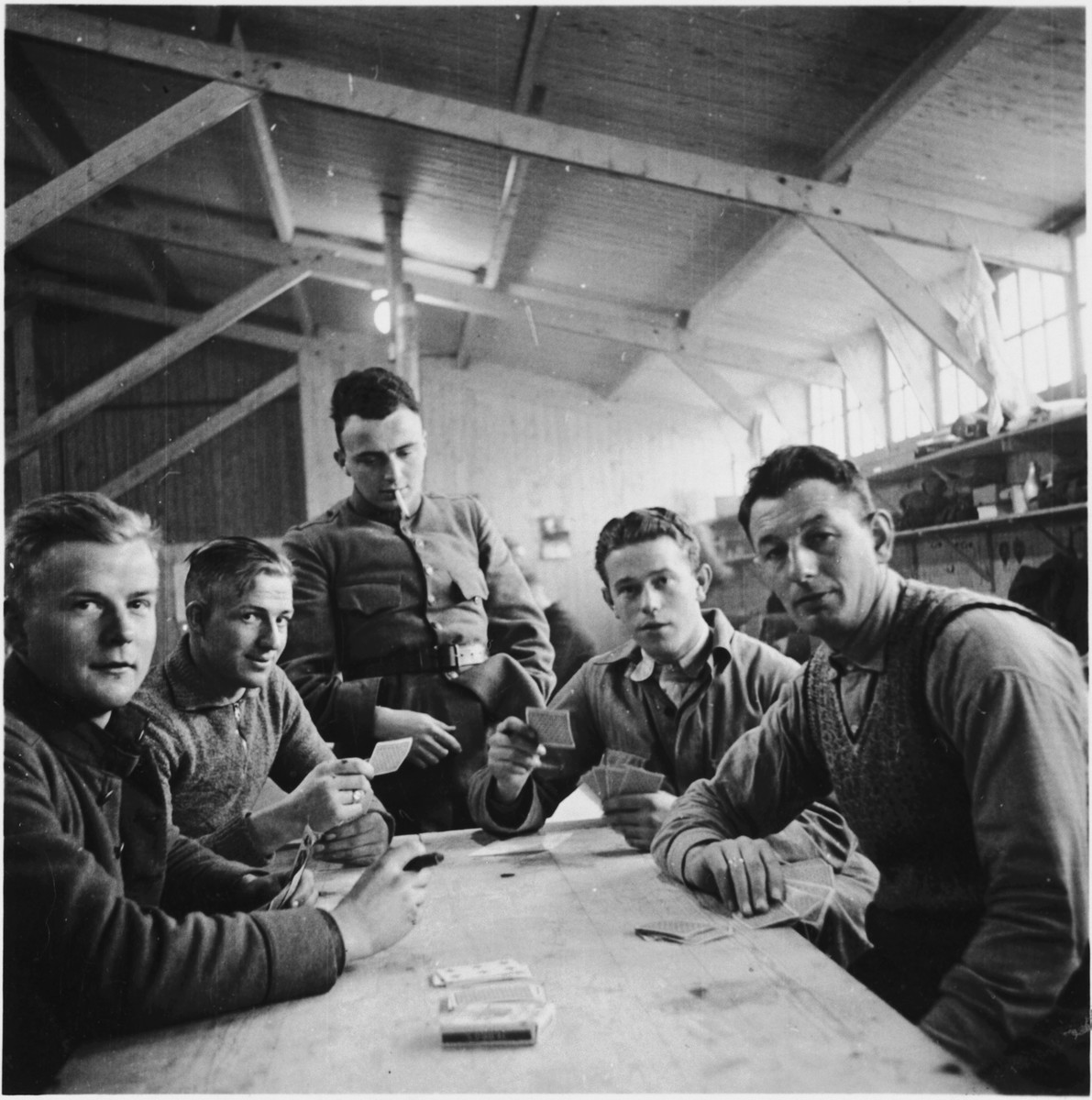 Dutch soldiers play cards inside a barracks during the Phony War.

Standing in the center is David Van Gelder.

Biography
David Ben Heled (born David van Gelder) is the son of Jonas (Yonatan) and Gertruda van Gelder. He was born in Leewarden, The Netherlands on October 2, 1920; his brother Arnold (Aharon) was born on April 22, 1918. After his parents separated, David lived with his mother in Amsterdam while his brother lived with his father. On May 10, 1940 Germany invaded The Netherlands and soon enacted several anti-Jewish measures. Arnold, who had worked as a clerk in the City Hall in Hilversum, lost his job because he was Jewish. Eventually he and his father joined David in Amsterdam. In 1943, David's mother and father were arrested and sent to Westerbork. David escaped from the collection point at the Schouwberg Theater after friends from the Judenrat distracted the Germans by offering them a drink. He and Arnold moved into an apartment together and tried unsuccessfully to get their parents released. Jonas and Gertruda van Gelder were both deported to Sobibor where they perished two weeks after their arrival. David wanted his brother to find a place for them to hide, but Arnold refused to live an illicit life. On April 27, 1943 the Dutch police and Gestapo arrested Arnold while he was while getting a haircut from a Jewish barber. He too was sent to Sobibor where he perished on May 7, 1943. Immediately after his brother's capture, David decided to go into hiding. He removed his yellow star and went to the Waterman family in Amsterdam. They gave him a bicycle with wooden hoops with which David cycled 30 kilometers to Hilversum to the home of Jan and Albertina (Franssen) Veldman. David stayed with them for few days and then moved to North Holland to another family whose name he received from the Veldmans. However, many of the town's people learned of his existence including the village priest who tried to convert him. The home where he was hiding was searched, and it became too dangerous to remain there any longer. David returned to the Veldman's home and hid there until the end of the war. Jan, who was a sculptor, constructed a camouflaged opening in the bedroom wardrobe with only enough room for David to crouch. The Germans searched the house three times; on the last occasion, Jan also had to hide in the special niche. After emerging from his cramped space on Liberation Day two years later, David decided to leave Holland for Palestine. The Hehalutz Zionist organization representative in Hilversum urged him to stay to study pasteurization methods, but David was anxious to leave as soon as possible. He left on a military convoy for France and then sailed on a ship bearing a Panamanian flag the 800. After first being interned in Athlit for a month, David settled in Kibbutz Hazorea where he worked at the dairy. A few years later he returned to Holland on a visit and met Letty Rudelsheim (later Aviva Ben Heled). They married in February 1950 on a kibbutz hachshara in Holland and later settled in Israel. In 1977 Yad Vashem recognized Jan and Tine Veldman as Righteous Among the Nations.