Portrait of four Jewish displaced persons in a garden in Warsaw. 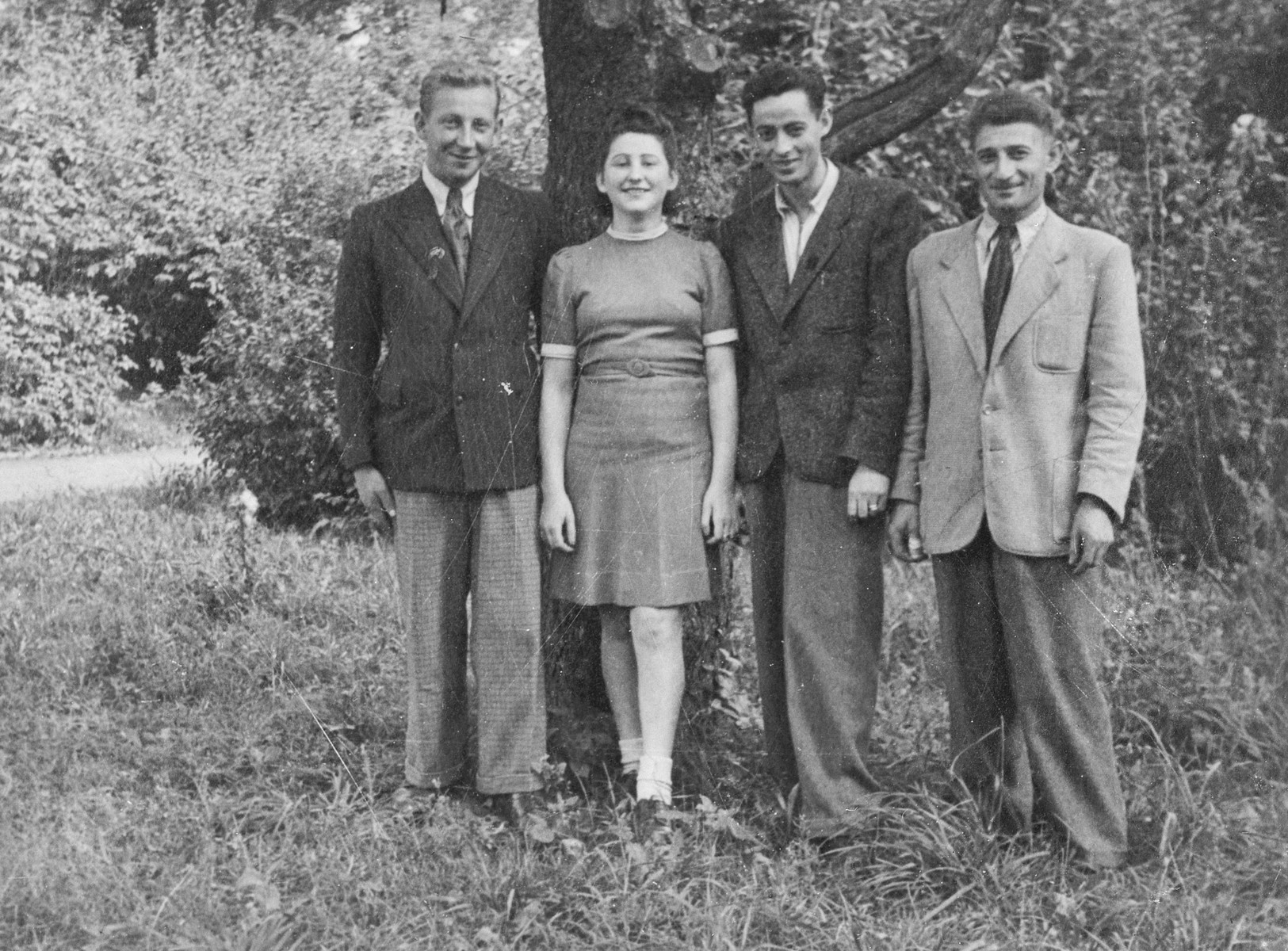 Portrait of four Jewish displaced persons in a garden in Warsaw.

Among those pictured are Rywa Gordon and her husband Izak Wertman (center).

Biography
Anna Nodel (born Niusia Chaja Gordon) and Regina Gordon (born Rywa Gordon) are the daughters of Moshe and Basia Gordon. Niusia was born in 1925 and Rywa was born in 1929. They had two younger brothers, Boruch (b. 1930) and Tevya (b. 1933). The family lived in Swieciany, Lithuania. After the German invasion of the Soviet Union in June 1941, they were forced into a ghetto the following August and remained there until its liquidation in April 1943. At that point, Niusia decided to go into hiding. She first stayed with a Polish couple but was forced to leave when authorities began to search for hidden Jews. Niusia then stayed with her former nanny, until they were forced to evacuate the apartment. She then returned to stay with the first couple briefly then ran away again. She contacted an acquaintance who managed a large "Soviet-style" cooperative farm outside of Swieciany, and he helped hide her in a barn. She then joined her father's cousin, and they found refuge with another Polish family. Niusia purchased false papers, and lived under her false identity until her liberation by the Soviet Army in June 1944.

During the liquidation of the Swieciany ghetto, the rest of the Gordon family was deported to the Vilna ghetto. From there, Moshe was sent to the Klooga concentration camp where he perished. When the Vilna ghetto was liquidated in September 1943, Rywa's mother and brothers were taken to Ponary and murdered. Rywa was sent first to Kaiserwald where she was forced to work unloading gravel from boats and building roads. From there she was sent to the Strasdenhof forced labor camp where she worked repairing telephone cables. While in Strasdenhof a female SS guard befriended her and helped protect Rywa after an injury. Rywa was then sent to Stutthof. In January 1945 she was sent on a death march and three weeks later she was liberated in Laenburg, Germany by the Russian Army. Her legs were frozen so Rywa went to a nearby hospital to recover. After her recuperation, Rywa went to Poland eventually arriving in Warsaw.

Niusia remained in Swieciany with her rescuers. After Niusia learned from other survivors that her sister was still alive, they began corresponding. Niusia was by then married to a soldier in the Red Army and had two sons. Niusia told her sister to stay in Poland, as she would not be able to emigrate from Lithuania. In 1948, Rywa came to Sweden, and then immigrated to Canada in 1951. Rywa made arrangements for Niusia and her family to come to Canada, but they were forbidden from leaving the Soviet Union. The sisters finally reunited in the fall of 1958 having not seen each other for 15 years.