A German Jewish refugee goes for a walk through the jungle in the Congo. 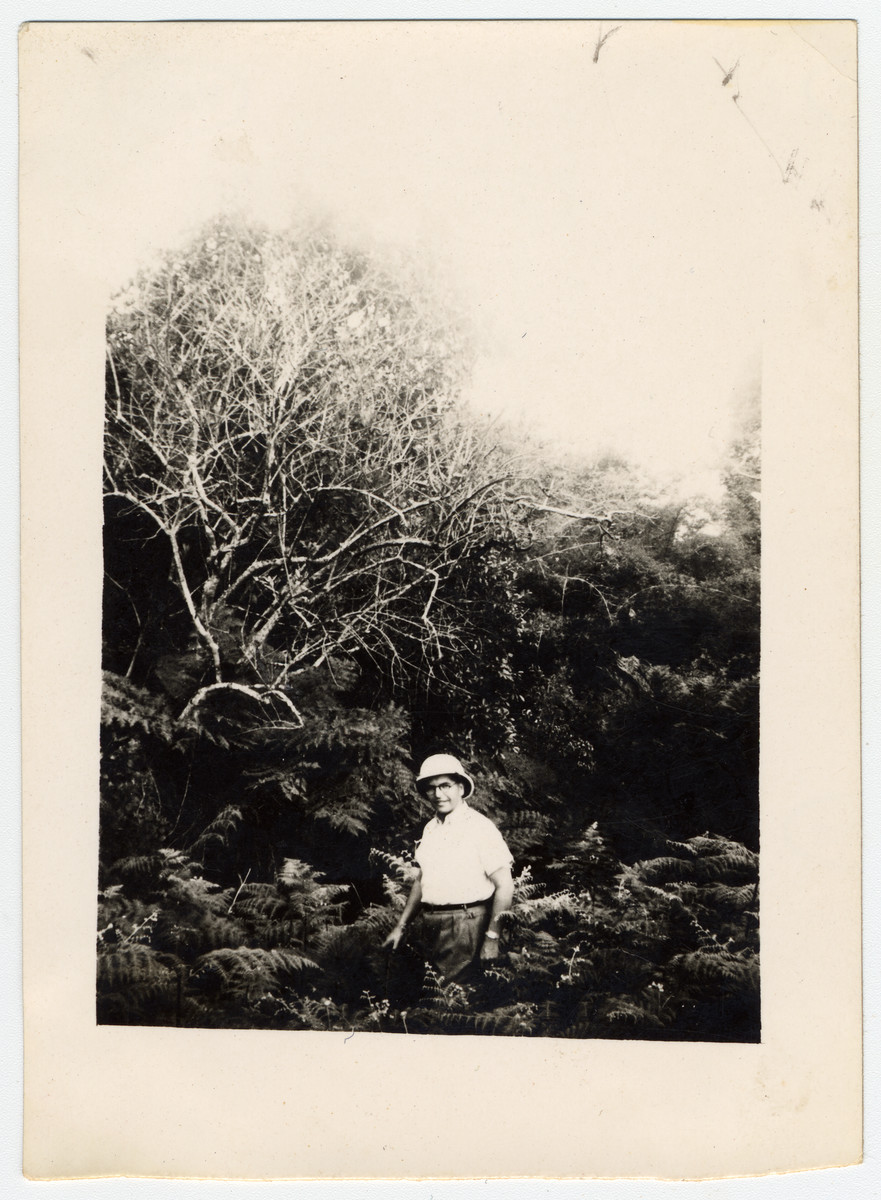 A German Jewish refugee goes for a walk through the jungle in the Congo.

Biography
Rosemarie Marienthal Molser is the daughter of Dr. Julius and Gertrude Marienthal. She was born in Bochum in Westphalia, Germany where her father was a lawyer and her mother was a concert pianist. Rosemarie, born in 1921, was the middle of three daughters. Her older sister Margaret was born in 1912, and her younger sister Heidi was born in 1922. Rosemarie attended a small private school in Bochum. After Hitler's takeover of power, Rosemarie complained to her best friend about his treatment of Jews. Her friend reported her to the authorities, and immediately their school expelled Rosemarie and Heidi. Heidi transferred to another school, but Rosemarie's parents decided she should leave the country to avoid getting into further trouble. Rosemarie went to Switzerland and attended a convent school in Menzingen, Switzerland and a high school in Geneva. While in high school, she received a letter from the Belgian Congo from a 30-year-old, Jewish doctor, Herbert Molser, whom she had never met. He was looking for a medical secretary, and Rosemarie's uncle, who had been a patient of his, had him her name. Herbert received his medical degree in Berlin where he studied tropical diseases at the urging of a professor who explained it would help him to get a visa to the Congo. (This same professor later was guilty of performing sadistic medical experiments.) Rosemarie's parents warned her not to correspond with an unknown gentleman, much her senior, but she responded anyhow. By 1938 Rosemarie's parents could no longer support her studies abroad, and she had to return to Germany. She applied for a new passport, and it arrived stamped with a red "J" for Jew. Rosemarie became afraid to return to Germany and asked the Mother Superior for advice. The Mother dressed Rosemarie as a nun in full habit, and she crossed back into Germany without being questioned at the border. Rosemarie returned home on November 2, 1938, just two weeks before Kristallnacht. Since she had reentered the country illegally, she was told she had to either leave or be imprisoned in a concentration camp. Since Rosemarie was too old to qualify for a Kindertransport, her relatives fabricated a story that she was a qualified domestic , even though had never performed any domestic chores, so that she could obtain a visa for England. Rosemarie received a housekeeping job and left for Great Britain. Her employers were angry that they had been sent a young girl without qualifications. Luckily, an Austrian Jewish refugee was working in the cottage next door. The two girls became friends, and the other girl agreed to cook meals for both families in exchange for Rosemarie cleaning both homes. Her employer, however, was still mad and threatened to send her back to Germany. Rosemarie, who spoke fluent French from her time in Geneva, then obtained a position as a French governess. (This family was later killed in the Blitz.) Meanwhile, Dr. Molser continued to write to her from the Congo urging her to leave Europe before war broke out and even sent her a one-way ticket. Rosemarie did not want to leave her family behind, but after Germany invaded Poland, she decided to accept his offer. After Rosemarie's ship docked in Leopoldville, she boarded a river boat to Stanleyville. She met Dr. Molser for the first time when her boat docked at 9:00 am on October 22, 1939. Rosemarie then learned that she could only stay in the Congo if they were married. They married that afternoon at 4:00 p.m. After the May 10, 1940 German invasion of Belgium, Rosemarie and Herbert were arrested and interned as enemy aliens. They were the only Jews in a camp of German internees, many of whom were quite antisemitic. After a German prisoner stole all of Rosemarie's food, the Red Cross insisted that they be released from detention. Herbert Molser obtained a job as head of a hospital in Lubumbashi, and they remained there for the remainder of the war. They immigrated to the United States in 1946 to reunite with Rosemarie's family. Her older sister managed to come to America in December 1938, and her parents and Heidi arrived on the last ship to the United States from Portugal in 1941. However, Herbert's family could not get out. His parentscorresponded with him until 1942. Then, after receiving deportation notices for concentration camp, they committed suicide. Rosemarie and Herbert Molser eventually settled in Rochester and were married for 61 years.