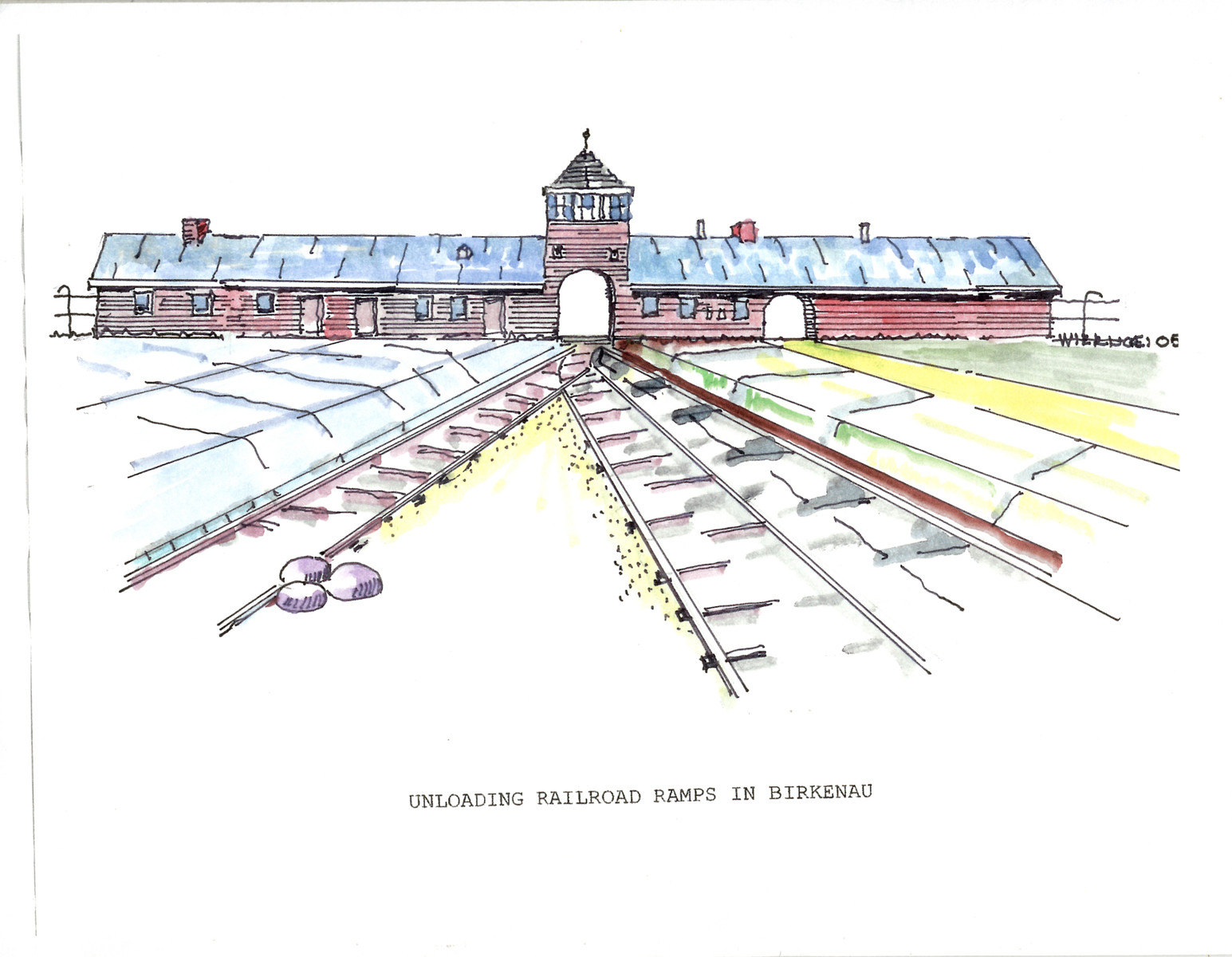 The caption under the drawing reads, "Unloading railroad ramps in Birkenau."

Biography
John Wiernicki (born Janusz Mikolaj Strojnowski) was born in Lvov, Poland into a Christian family. His father was a professional soldier stationed in Lyczakow, and was the quartermaster and deputy commander of his regiment. His mother was a volunteer nurse at the military hospital and worked with many charitable organizations in the city.

In the summer of 1939, Wiernicke had just completed his freshman year at the Military Academy in Lvov. He attempted to join the cadet training battalion in August, but was deferred due to his youth and a medical issue with his left foot. He customarily spent his summers with his mother's relatives in Potoczek, and when the war broke out that fall he continued his stay there.

In 1942, Wiernicki was accused by a Gestapo informer of supporting the Polish Underground activities. In order to avoid arrest and to protect his family from persecution, he joined the Partisans' Unit of the Polish Home Army in the Lublin District. He spent the next six months with them, constantly on the move and involved in many skirmishes with the German police.

In the summer of 1943 Wiernicki was arrested by the Gestapo at the Kielce railroad station, along with many other passengers. Following his interrogation, he was sent to Auschwitz - Birkenau under the name of Janusz Stronjnowski, and received the number 150302. He arrived in September 1943 and was sent to the quarantine camp in Birkenau. There, he endured harsh and brutal treatment from the SS, limited food rations, and arduous work. He witnessed countless trains of Jews arriving at the camp, most of which were sent directly to the gas chambers. In August of 1944, he witnessed the liquidation of the entire Roma family camp in Birkenau.

In December 1944, as the Soviet Army approached, he was sent with a transport of 500 prisoners to Buchenwald, and then to Ohrdruf, where he worked digging tunnels into the side of the Jonastal Valley. This emergency construction project was thought to be an underground facility for the German Army Communication Center and an underground shelter for Hitler's headquarters train.

In April 1945, Ohrdruf was evacutated and Wiernicki was sent on a death march to Buchenwald. He escaped from the march, was liberated by the American army, and subsequently joined the Allied Forces in Italy. After the war, he returned to civilian life, married, emigrated to the United States in 1957, raised two sons, and became a successful architect. In 1995, he was decorated by the president of Poland, Lech Walesa, for his military service during the war.