Discharge papers for Ayre Kolomeitzev when he was Chief Engineer of the Altalena. Discharged due to loss of vessel by fire and explosion. 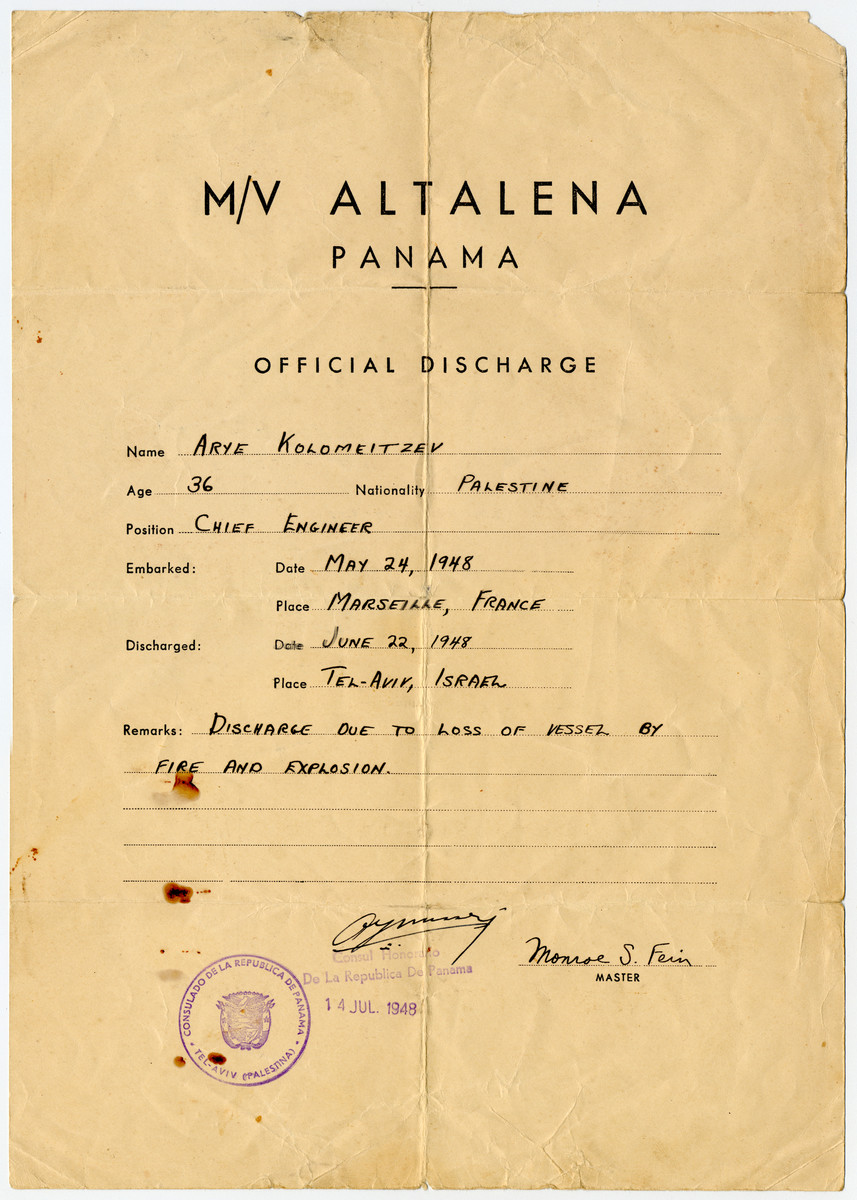 Discharge papers for Ayre Kolomeitzev when he was Chief Engineer of the Altalena. Discharged due to loss of vessel by fire and explosion.

Biography
Arye Kole (born Arye Kolomeitzev), 1912-1984, was the youngest of nine children born to Eliezar and Malka Kolomeitzev, a Zionist family. In 1914, the Kolomeitzevs relocated from Russia to Jaffa, Palestine, but returned to Odessa, Russia a year later because Eliezar refused to join the Turkish Army in WWI. In 1919, Malka and seven of her children moved to Tel Aviv, Palestine where she supported her family by founding a restaurant and a sewing factory. Eliezar was imprisoned in Russia during the Revolution and was never seen again. In his youth, Arye participated in the Haganah and attended both an Alliance school in Jerusalem and University in France, where he earned a mechanical engineering degree. After the German invasion of France, Arye was a stowaway on a ship bound for Syria in hopes of returning to Palestine. Arye successfully arrived in the northern border, but was arrested upon entering Palestine and was brought to Tel Aviv. Upon release, Arye became an active member of Mossad, an underground intelligence organization that prepared for the immigration of Jews to Palestine and trained its members to operate illegal immigration ships from Europe to Palestine. Arye received his first training with Swedish ships, and then later joined the American Army Transport as a British national where he served in Okinawa as an engineering officer. After World War II, Arye combined his formal education as an engineer with his experience as a sailor to serve as a ship engineer for Aliyah Bet. The first step was acquiring ships, a difficult process in Europe due to a lack of available ships and British law that prevented sales to Palestine. Therefore, Aliyah Bet turned to the United States and Canada because there were no laws to prevent the sales, there was a surplus of ships, and the ships were larger to accommodate more refugees. Each ship had a crew composed of two groups of seamen, American volunteers and representatives from Palestine. The first ship acquired by the Mossad was the Beuharnois that previously served as a supply ship for the British Army in WWII. Arye served as the chief engineer of the Beuharnois and sailed it to Savona, Italy with a stop in Azures for repairs. On June 19, 1946, the Beuharnois picked up approximately 1,250 Eastern European immigrants, and the ship was renamed the Josiah Wedgwood. On June 25, 1946 the Wedgwood was captured by the British 75 miles from the shore of Palestine and escorted to Haifa. The refugees on board were transferred to Atlit detention camp, where they were released a few weeks later. However, Arye built a fake wall in the engine room, where he hid with several crew members until a cleaning crew of Haganah members aided in their escape. As the Wedgwood was docked in the Haifa port, members of the Haganah secretly transformed it into a war ship, renamed the Shomer to serve as part of the Israeli Navy. Arye next worked on the President Warfield, located in Baltimore, Maryland. Arye served as its chief engineer in charge of refurbishing the President Warfield in the harbor but did not accompany it to Port de Buc, France, where the President Warfield picked up 4,500 refugees and was renamed The Exodus. Arye stayed in Baltimore and prepared a third ship, the Northland, for sea. The Northland first sailed to Bayonne, France for further repairs and prepared for the journey to Palestine. On August 28, 1947, the Northland sailed with her sister ship the Geula for Bulgaria, where 2,600 Romanian Jews boarded. The Northland changed its name to the Jewish State and sailed towards Palestine on September 26, 1947. Upon entering the Aegean Sea, the British captured both the Jewish State and the Geula and brought them to the port of Haifa. The Jewish State was secretly renovated and served the Israel Navy as Eilat.