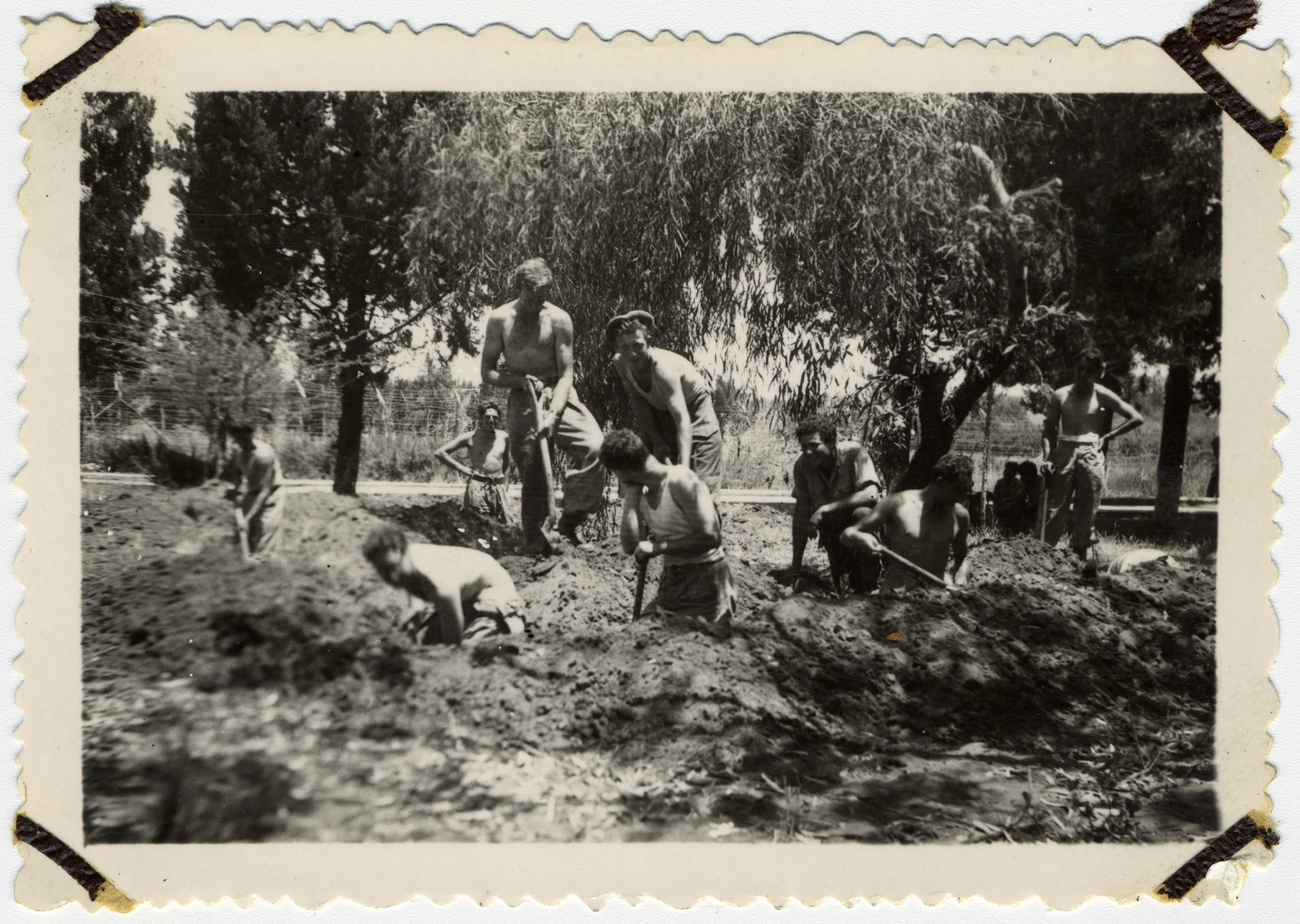 Among those pictured is Mordechay Frost.

Biography
Mordechay Frost (born Kurt (later Frost) is the son of Alfred Frost and Regina Adler Frost. Kurt was born in 1927 in Vienna where his father's family had lived since the 18th century. His mother's family came from Wadowice, Poland and had settled in Vienna. Alfred sold electrical appliances and exported them to the Balkans. Kurt's only sister, Gertrude (Gertie) was born in 1937. The family was totally assimilated and secular; a large statue of Wagner stood on their piano. Alfred Frost served as an officer during World War I. Life for the Frosts changed radically after the Anschluss with Germany in March 1938. Kurt was expelled from school and his father's business was confiscated. Anxious for the family leave Austria, in January 1939 Kurt's parents sent him on a Kindertransport to Belgium. After a short stay in a children's home, the Korns, a Belgian Jewish family, took in Kurt as a foster child. He became the companion of their only son Henri who was approximately the same age. In September 1939, Kurt's parents and sister also fled to Belgium and settled in Antwerp. Kurt remained with the Korn family a while longer until his parents found housing and a job. On May 10, 1940 Germany invaded Belgium, and the next day Belgian authorities arrested Alfred Frost as an enemy alien and deported him to Le Vernet internment camp in France. Regina decided to flee to France with the two children, but when they discovered German tanks at the border, they had no choice but to return to Antwerp, a journey of over 80 kilometers by foot. The following year, the family received a deportation order. Rather than comply, Regina went to the German headquarters. Carrying her husband's WWI medals, she explained to the German commandant that her husband had served as an officer in World War I and that she wanted to be allowed to reunite with him in France. The commandant, though perplexed, granted permission for the family to travel. Ironically, they rode on a German military train, the only available transport and came to Agen in Lot-et-Garonne. Alfred, who was constructing roads on a nearby forced labor brigade, was allowed to rejoin them. They found a place to live on the outskirts of the town with the farmer Degaulejac. In 1942 as the situation for Jews became more perilous, a woman visited them on behalf of Rabbi Fuchs. Together with the Eclaireuers Israelites he was organizing transports of children to smuggle over the border to Switzerland. After their parents consented, Kurt and Gertrude joined the group and arrived in Switzerland in September 1942. The children first were sent to the refugee camp Varembe in Geneva. Then Gertie was placed in a convent while Kurt moved to Appenzell. From there he moved to Les Murailles, a children's home in Geneva run by Jewish woman Mme. Bigart, and remained there for the next two and a half years. In early 1943 Kurt's parents received a warning that they were about to be arrested and should flee immediately. They made their way to Nimes in southern France where they hired a passeur to take them to Switzerland. The guide brought them as far as the barbed war fence before abandoning them and telling them they had seven minutes to cross the fence before the next patrol. After crossing the border, the Swiss interned them in separate work camps, segregated by gender. Alfred performed agricultural work and Regina sewed. They received wages for their work, but the money was kept in bank to be used for emigration at the end of the war. They were permitted only one hour-long visit a month. After hearing that his parents had arrived in Switzerland, Kurt borrowed a friends' bicycle and rode over 100 kilometers to visit his father. After the war, Kurt's parents received permission to remain in Switzerland owing to prewar business connections. They remained in Switzerland until their deaths. Kurt together with most of the youth from Les Murailles left Switzerland at the end of May, 1945 with Youth Aliyah. They traveled to Barcelona where they boarded the Non Plus Ultra, immigrating legally to Palestine in July. Kurt first went to Givat Brenner. He joined the Palmach, fought in Israel's War of Independence and was wounded in his leg. After the war he helped found Kibbutz Yiftach in the Galil. In 1950 the Mossad recruited him for a mission using his French. Mordechay went to Paris where he assumed the identity of a French journalist, Roger Martin. The French Minister of Interior Jules Moch (who was both Jewish and a socialist) gave him a French passport with which he made his way to Egypt. There he met with Egyptian Zionists, but soon was arrested in the home of a Jewish family whose son was a Communist as King Farouk was strongly anti-Communist. Kurt remained in prison for nine months, but as a French journalist, and therefore in the prison for foreigners. He was under the care of the French embassy and each day someone from the consulate brought him lunch. After his release from prison, Kurt (now Mordechay) returned to Israel where he worked for the Jewish Agency, Hebrew University and the Jewish National Fund (Keren Kayemet).