Group portrait of children in their bathing suits from the Heiden children's home in Switzerland visiting a public swimming pool. All of the children had been on the Kasztner Transport. 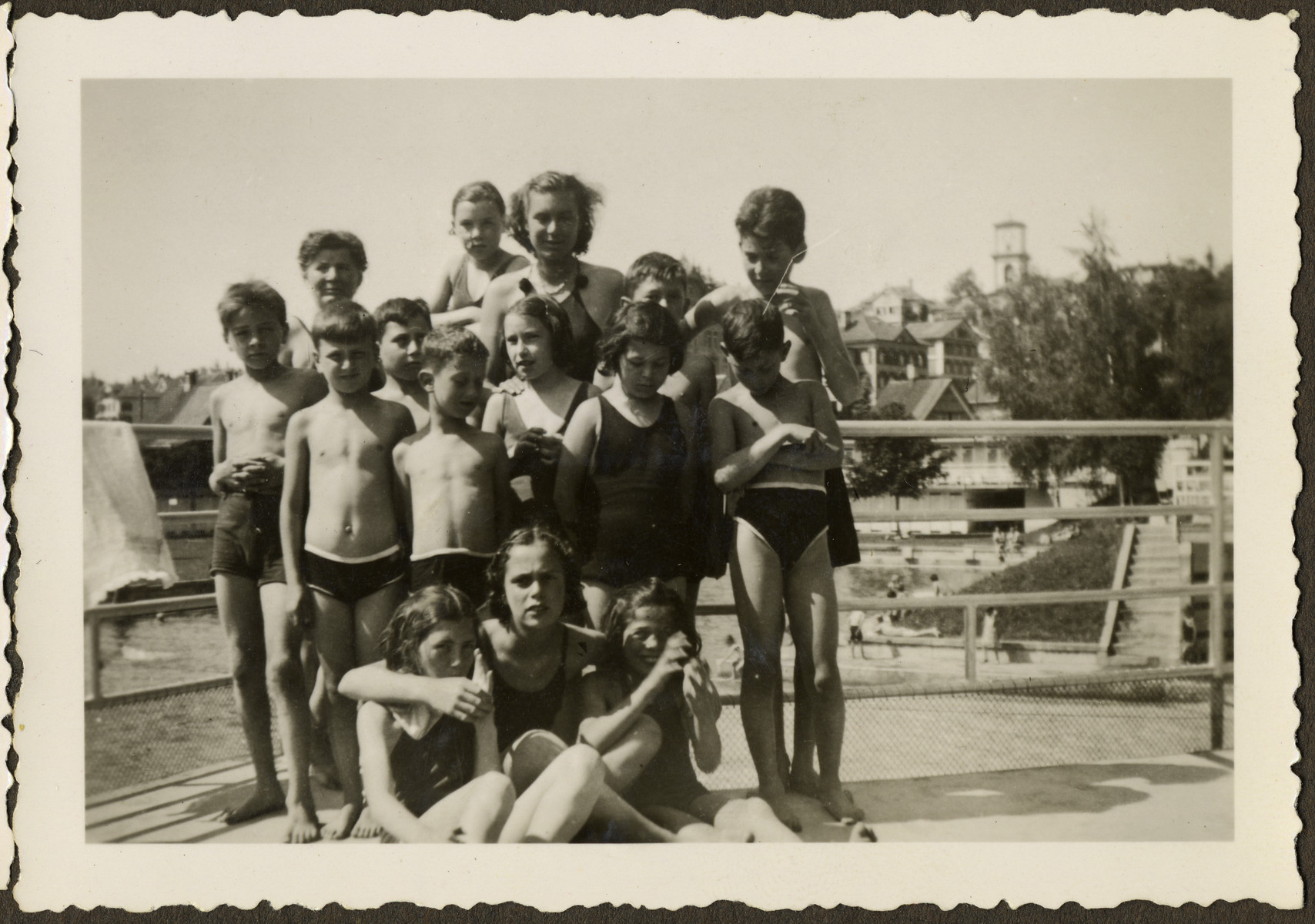 Group portrait of children in their bathing suits from the Heiden children's home in Switzerland visiting a public swimming pool. All of the children had been on the Kasztner Transport.

Manny Mandel is standing first row on the right looking down.

Biography
Emanuel (Manny) Mandel is the only child of Yehuda Mandel and Ella Klein Mandel. He was born on May 8, 1936 in Riga Latvia, but when Manny was only a few months old, his family moved to Budapest where his father became the Chief Cantor of the Rombach Street synagogue. Manny's father Yehuda was born in Csepe, Ruthenia in 1904, and his mother Ella was born in Kunszentmiklos in Southern Hungary in 1908. After anti-Jewish laws were passed in 1938, Jews were severely harassed in Hungary. Manny's father had to follow him to school to assure that he made it there safely. In March 1944 Germany assumed direct control of Hungary and almost immediately began deporting its Jewish population. Manny's paternal uncle, David Mandel, was active in Hashomer Hatzair and involved with the organized Jewish community known as the Vaada. He secured spots for Ella and Manny on the Kasztner Transport, a group of Jews the Germans agreed to exchange for trucks. Cantor Mandel meanwhile had been conscripted into a forced labor battalion. In June, Manny and his mother were deported by train directly to Bergen-Belsen. They remained in Bergen-Belsen for six months until they were released as part of the barter and sent to Switzerland on December 6, 1944. Manny and his mother stayed at the Heiden children's home where Ella worked as a teacher. In 1945 they immigrated legally to Palestine in 1945 and were placed in Kibbutz Shaar HaAmakim. Manny's father, Cantor Yehuda Mandel, managed to escape from his labor brigade in November 1944 and return to Budapest. There he became a runner for Wallenberg and remained in the city until its liberation by the Soviet Army on February 13, 1945. Wanting to join his wife and son in Palestine, he made his way to La Spezia harbor to board an illegal immigration ship. Once the British learned of the ship and prevented its sailing in April 1946, Yehuda Mandel helped organize a hunger strike in protest. Eventually the British yielded and Yehuda sailed to Palestine in May on board the Eliahu Golomb or its sister ship the Dov Hos. After reuniting, the Mandels settled in Haifa where Yehuda Mandel was selected as Cantor. In 1949 they migrated to the U.S. Though Manny's immediate family survived the war, many of his relatives perished including his grandmother Rosa Braun Mandel, his maternal grandparents Rabbi Aaron and Paula Klein and his seven-year-old cousin Judit Krishaber who were killed at Auschwitz.