Pages of a photo album showing portraits of Otto Schenkelbach before and after his incarceration in concentration camp. 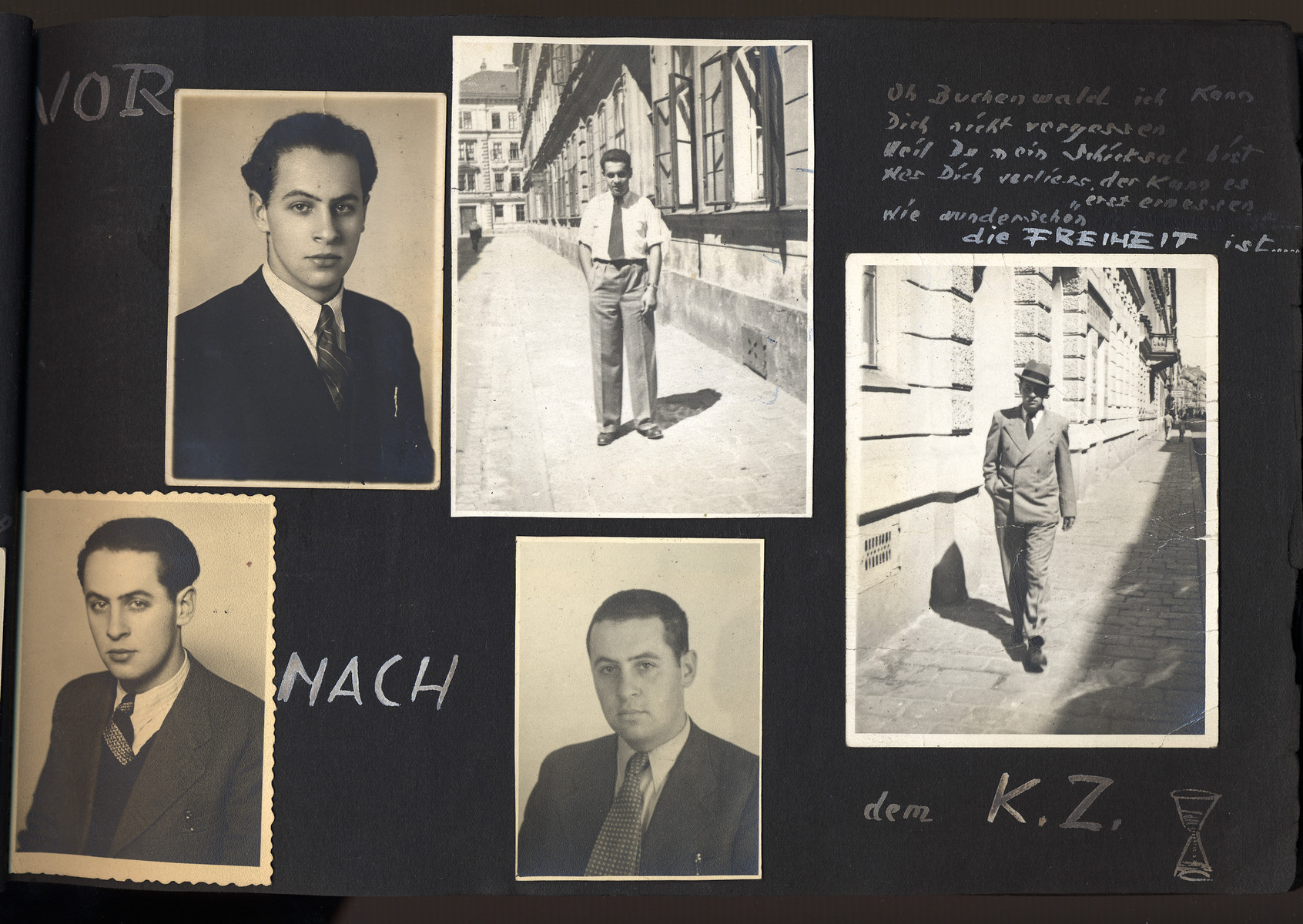 Pages of a photo album showing portraits of Otto Schenkelbach before and after his incarceration in concentration camp.

Biography
Janet Shenk is the daughter of Otto Schenkelbach and Margaret (Gretl) Feldbau. Both of her parents were born in Vienna and moved to the United States as young adults. Otto Schenkelbach was the son of Isaak (Ello) and Therese Schenkelbach. He was born in Vienna on May 28, 1914. His father owned a small furniture factory and was active in the Socialist Party. In the 1930's, he hid weapons for the party at his factory. Otto had one younger brother, Ernst (Ernstl) born on March 2, 1919. They lived in the Prata neighborhood. In the mid-1930s, Otto's father emigrated to Palestine, while his mother remained behind. She was deported to Minsk on May 27, 1942 and then perished in the Holocaust. Ernstl joined his father in Palestine and from there emigrated to the United States. On Otto's 24th birthday, May 28, 1938, he was arrested at his place of work, along with five other Jewish employees, and sent to the Dachau concentration camp. After Kristallnacht, he was transferred to Buchenwald. Otto spent a total of eleven months in concentration camp. In April, 1939, he was released with the warning that if he did not leave the country within four weeks, he would be arrested again. Otto's father begged relatives in New York to send affidavits, which they did. The Jewish Community in Vienna helped provide a ticket for the journey.

Gretl Feldbau met Otto at her sister's dancing class in 1932. The two met again at a dance in 1938 and began dating just prior to Otto's arrest. Gretl was the daughter of Josef Feldbau (born in St. Stanislau, Galizien (later Poland) in 1883) and Betty (Brana) Silver, born in Podusow (Poland) in 1894, daughter of Leiser Silber and Keile Fuchs. Podusov was a tiny village with five Jewish families. At the age of 12, Betty was sent to live with an aunt in Vienna so that she could attend school. Joseph moved to Vienna at the age of 13.

Gretl was born on April 16, 1915 and she had two siblings. Edith (later Rubin) was born in September 1916; Alfred (Fredl) was born in August, 1913, and later became a medical student at the University of Vienna. Both girls attended the Realgymnasium and university as well. The family lived at 27 Weyringergasse in Vienna, and Joseph owned a liquor store (Brandweingeschaeft) in the fourth district. Soon after the Nazi takeover in March 1938, Jewish shopkeepers, Josef among them, were forced out of their shops and made to scrub the streets. This was a harbinger of things to come. A sister of Josef had already emigrated to America and offered to sponsor the family but was only allowed to sponsor two people. At first, the American Consul refused the family's petition for visas. After Otto was arrested, Gretl begged the consul to grant a visa for Fredl, considered the most endangered. He was the first to leave. Edith and Gretl received visas a few weeks later and left Vienna in July, 1938. Their parents were put on the Polish quota with a long waiting list.

Gretl and Edith traveled separately to England and met in Southampton to board the Cunard line's "Georgic," arriving in New York on August 14, 1938. They moved in with relatives, the Vogels, on East 5th Street. Gretl then sought ways to get her parents to the States as well. In the meantime, her parents' apartment and business in Vienna had both been confiscated, and they were forced to move in with other families. It became almost impossible to obtain immigration permits to the United States. Luckily, Gretl had worked for a while in Northampton, England as an au pair. She sought and received the assistance of a Christian British family, Colin and Elizabeth Robinson, who were able to get her parents into England while they waited for their American visas. They finally came to America in April 1940.

Otto's father had left for Palestine before his son's release from Buchenwald, but he succeeded in getting an affidavit from relatives in New York to enable Otto to get a visa. He arrived in New York in July, 1939. Gretl also helped Otto immigrate, and the two wed in New York on July 21, 1940, just after Gretl's parents arrived in the U.S. Otto changed his last name from Schenkelbach to Shenk. In 1943, Otto was drafted into the American army, did basic training in Alabama, and shipped off to Italy. He fought in Southern France and was badly wounded near Grenoble on September 13, 1944. He was awarded the Purple Heart and spent several years in hospitals, undergoing operations on his hip.