Young men at Rabbi Stern's children's home wearing the work clothes of the trades they were learning. 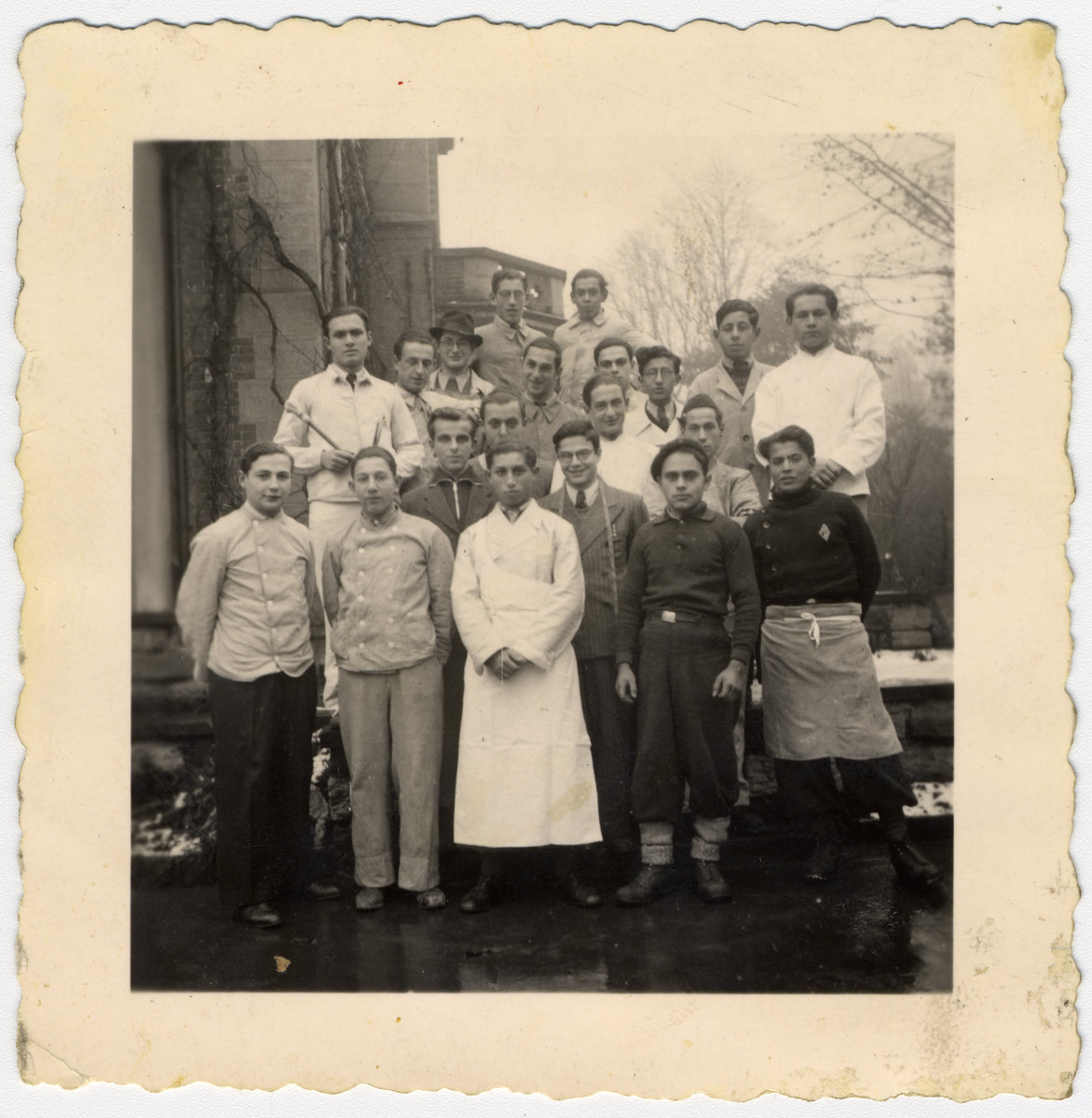 Young men at Rabbi Stern's children's home wearing the work clothes of the trades they were learning.

Biography
Ruth Schwarzhaupt is the youngest daughter of Albert and Hella (nee Rheinhold) Schwarzhaupt. Albert was born in Regensburg and Hella in Kleineibstadt. Ruth was born on May 10, 1931 in Munich, but her family moved to Konstanz about three years later. Albert, who may have had his own business for a time, sold electric bulbs, a job which required a great deal of travel. Hella was religiously observant, but he was more relaxed. Ruth had two older sisters, Rosi, later Rose (born on February 5, 1922) and Hanni, later Anne (born on September 30, 1924), as well as an older brother, Max (born on October 29, 1927). Following the Nazi takeover in 1933, life for the Schwarzhaupts changed in many ways. In 1935, Rose and Anne were sent to the United States where they lived, in Washington Heights, with an Orthodox family, whom they did not previously know.

In Germany, Max attended a Jewish school in Nuremberg until he had to return to Konstanz after Nazis attacked the students with tree branches. Ruth recalls that the family's mailbox was defaced with antisemitic graffiti, and in the late thirties Ruth was no longer permitted to attend school. In November 1938, Ruth's father, Albert left on a business trip and, upon his return, spotted the synagogue burning and ran inside. On his way out, with one or several Torah scrolls in his arms, he was arrested and temporarily incarcerated.

Afterwards, he and Hella decided to find a safe haven for their two youngest children. They were able to send Ruth and Max to Switzerland under the auspices of the "Schweizer Hilfswerk für Emigrantenkinder", an organization founded by Swiss Jewish women. Max and Ruth, wearing nametags around their necks, left Germany with a group of other Jewish children on February 16, 1939. They arrived in Lucerne. Ruth was supposed to live with a couple who had children of their own. They left chocolate on her pillow on her arrival, but Ruth, who was only seven year old, cried so hard that at 10 o'clock that night, the family brought her to the home of a Mrs. Rosenblatt, where Max was staying. Mrs. Rosenblatt decided she wanted a girl instead of a boy and Max was thus sent elsewhere. After a few years of being unhappy at Mrs Rosenblatt's pension, Ruth complained to the local representative of the Swiss women's organization and was transferred to a children's home in Basel run by a young rabbi, Jacob Stern and his wife. They ran a religious home and maintained strict discipline. Eventually, Ruth moved from there to the Kinderheim Wartheim in Heiden (near St. Gallen) where she was much happier. Though most of the children were Jewish refugees, the staff was Christian and very kind. While at the home, Ruth became friendly with a Swiss boy from a neighboring village and saw him fairly often. Though the friendship was innocent, someone from the staff felt she was getting too old for the Kinderheim and decided to transfer her yet again. Ruth was next sent to a progressive private school, the "École d'Humanité" near Lac Noir in Canton Bern. The school, run by Paulus and Edith Geheb, had originally achieved fame in Germany under the name of the Odenwaldschule. Paulus was a rather remote intellectual, his wife Edith having much more contact with the residents, many now refugees. In addition to room and board, the school offered high school classes (often held out of doors), limited "self-government" and lessons in ballroom dancing and acting. Ruth remained there for one year until the end of WWII.

While in Switzerland , Ruth and Max maintained contact with Maria Klauber, a cousin of their father's who lived, together with her aged parents, in a hotel in Geneva. She had promised Albert and Hella that she would help the children, particularly if anything were to happen to the parents.

In fact, on October 22, 1940, about a year and a half after Ruth and Max had left for Switzerland, Albert and Hella Schwarzhaupt were deported to southern France as part of the infamous "Aktion Buerckel", the operation to relocate the Jewish population of the Saar, the Palatinate and Baden so that these areas could be declared "judenrein"-- free of Jews. They were initially shipped to Gurs. From there, they were transferred to the so-called "Hospital Camp" of Recebedou outside of Toulouse where Albert perished from untreated diabetes on April 17, 1941. Ruth received her final postcard from her mother on August 22, 1942. The following week, on August 28, 1942, Hella was deported, first to Drancy, and then to Auschwitz, where she perished.

After the war, Maria Klauber contacted her brothers in the United States, and they arranged for Ruth and Max to immigrate to the US. They sailed to America aboard a converted coal freighter and arrived at the end of 1946. Ruth went to live with her father's cousin Ernst Klauber and his wife Marietta. Max stayed with his older sister Anne. Max married and had four children before succumbing to cancer at the young age of 52. A few years later, Rose--in her sixties-- also passed away.