This 1943 composite picture shows the last graduating class of the Jewish Gymnasium in Munkacs. Olga Weisz (later Wachtenheim) is pictured in the class photo. 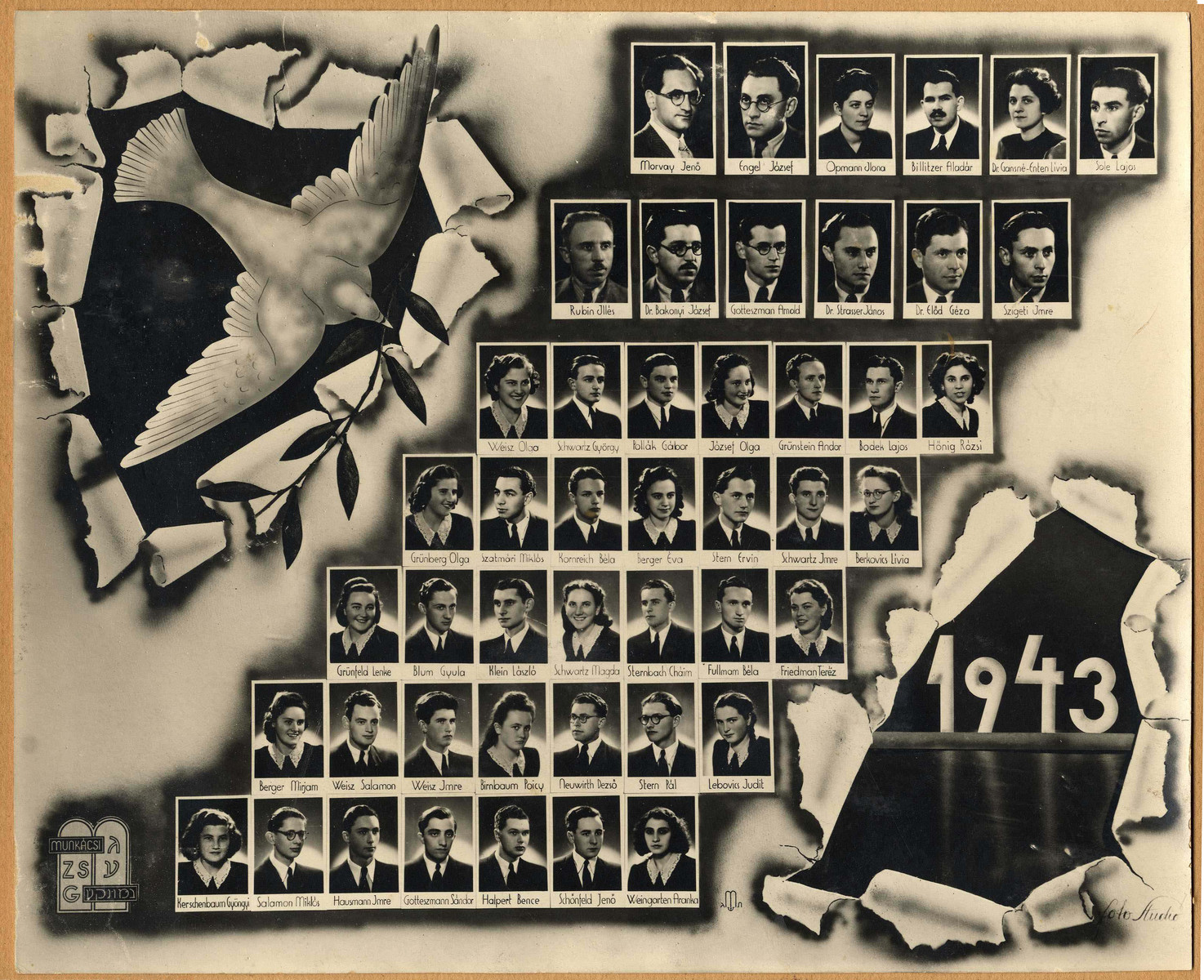 This 1943 composite picture shows the last graduating class of the Jewish Gymnasium in Munkacs. Olga Weisz (later Wachtenheim) is pictured in the class photo.

Biography
Olga Wachtenheim (born Olga Weisz) is the daughter of Louis and Hannah Weisz. She was born in Bacska, Czechoslvakia on June 2, 1923 where her parents ran a farm and store. They were highly respected and politically active in their community. They had ten children: Bertha, David (b. 1909), Elizabeth (b. 1911), Shari (b. 1912), Alek (b. 1915), Barna (b. 1917), Eugene (b. 1919), Nandor (b. 1920), Olga (donor), and Bobbie (b. 1925). Backsa was a small community of only 360 families, however only 4 families were Jewish. The Weisz family kept kosher and observed the Sabbath. Six of the children were sent to school in Ungvar. They lived with a woman who took care of them. Once a week, on Thursdays, one of the brothers would take the train back to Bacska to pick up food for the siblings for the next week. In the late 1930s, David and Alek left for Prague to attend university. They supported themselves as tutors. After the German annexation of the Sudentenland, they fled to Holland, and then England. Nandor, Olga, and Bobbie were sent to live with their married sister Bertha in Munkacs, where they attended the Jewish Gymnasium. After Nandor graduated from the Gymnasium, he was asked to stay on as a teacher, and taught the fourth grade class. Olga only attended school at the Gymnasium for two years. The school's last graduation was in 1943 and it had to close in 1944. After her graduation in 1943, Olga returned home and decided that she wanted to be a scientist. She moved to Budapest with her sister Shari, but was unable to get accepted to any schools because she was Jewish. Olga found work in a salon altering dresses.

In March 1944, Germany invaded Hungary. That spring of 1944, all of the siblings returned home to celebrate Passover as a family; however Louis was unable to conduct the seder because everyone was so emotional. In addition to their own children, Irene and Eugene Princz, a niece and nephew from Slovakia, also lived with them. Local authorities had warned the Weisz family of an imminent deportation. Bobbie decided to return to Munkacs to finish her education, and Nandor returned back to Munkacs to teach. After Louis was warned by authorities that someone was coming to search their home looking for them, Eugene and Irene were sent to Budapest for safety. Irene found work as a maid in the home of a Jewish couple. The wife was paranoid that her husband was having an affair with Irene, and reported her to the police. Irene was deported and did not survive the Holocaust. Eugene was involved with the black market in Budapest. Hannah Weisz sent him weekly packages of food, and one day he wrote to her that she no longer needed to send them.

While Olga was at her parent's home, a young Protestant from Bacska - Palagyi, who was a casual acquaintance, came to the door looking for her. He said that he knew her life was in danger and he would like to save her. Olga's first response was that she had to check with her parents. It was decided that Olga would go to Budapest on false papers, and if she was successful, then her sisters Shari and Elizabeth would follow. Palagyi purchased tickets for Olga, and helped get her to the train station. He also provided her with identification papers that belonged to his cousin, with the name Jolan Kardos. On the train, soldiers teased her that she was a young Jew running away. When they asked where she was going, she lied and told them that she was going to pick up her sick grandmother and bring her back to the family's farm. Once she arrived in Budapest, Olga cabled her family. Her sisters however decided they would not follow her.

Olga found lodging with a woman whose Jewish husband had been deported, and found new work in a factory sewing. With her false identity, Olga did not wear a Star of David, but she could no longer eat in kosher restaurants, and could not afford ration cards. Instead she ate at non-kosher restaurants, but only ordered the bean soup, because she thought it was vegetarian. Eugene Princz had a friend that had previously warned Olga to go into hiding to avoid being sent to the concentration camps. This gentleman was taken with Olga, and brought her bread with butter each morning for her breakfast. Palagyi came to visit Olga in Budapest and confessed to her that he was in love with her and wanted to marry her which is why he helped rescue her. Olga was flattered, but was not interested in marrying him, so she told him that they could not marry until after the war, and the world returned to normal.

Olga's boyfriend, Mikulash Friedman, was selected for forced labor in an office. He stopped in the ghetto to visit his parents, who were sharing a room with Olga's parents, who all wished for the two to get married. Mikulash's co-worker, Eugene Wachtenheim, had a brother Herman who lived in Budapest. Because Eugene's letters to his brother were being censored, they decided to send the letters to Olga, and Herman would pick them up from her apartment. When she opened her door and saw him for the first time they fell in love, and she knew that he would be the man she married.

Herman Wachtenheim was also living in Budapest under false papers. His family was from Beregszaz, which is in the same region as Muncaks and Ungvar. Herman made false papers for others, and knew many people. Mikulash told Herman that Olga was his sister, and that she was engaged. When Herman asked to see a picture of her fiancé, she showed him a picture of her brother Alek, who was living in England. Herman knew that he was not her fiancé, as he was dating Herman's sister Edith, who also lived in England. Herman told Olga that he would take care of her. After Olga's factory was destroyed during a bombing raid, Herman found work for Olga in the home of a Jewish couple, who lived in hiding around the corner from the Budapest ghetto. Olga did their shopping for them, and they lived in the basement.

In December 1944 Herman was liberated, and Olga was liberated in January 1945. Herman returned to Budapest with a group of friends and protected Olga from the Soviet soldiers. Olga, Herman, and a group of friends (about 40-50 people in total), went east to Debrecyn. They were arrested and put in jail for the night. One of the guards was Jewish and warned them not to tell anybody they were Jewish. After their release, the group split up. They returned to Herman's home in Beregszaz where they reunited with his brother Eugene. Olga's sister Bobbie returned from Auschwitz, still wearing her striped concentration camp uniform. Their brother Barna had been in a labor battalion and ended up being sent to Siberia. He reunited with his family after the war. Louis and Hannah Weisz were killed in Auschwitz along with their daughters Bertha, her three children, Elizabeth, and Shari. Nandor was also deported to Auschwitz, and died during a death march.

Herman and Olga were married in a civil ceremony on March 25, 1945 and again in a religious ceremony on April 6, 1945. The couple went to the Joint office in Bucharest to find family members. They were there for two weeks, and then returned home to Beregszaz. They received word that n October 1944, Herman's sister Irene and her husband were killed, but their 3 year old son George (b. April 13, 1942) survived because he happened to be out of the house at the time. In April 1945, Olga and Herman went to Slovakia to pick him up. The new family moved to Prague. In October 1946, a very pregnant Olga made a three day flight, all alone, to the United States. She landed on October 21, 1946. Her daughter Joan, was born eight days later. Herman came to the U.S. in December 1946, leaving George behind in the care of his brother Eugene. Eugene and George finally joined them in January 1947. Olga first lived with her aunt Dora Abraham (b. 1899) who immigrated to the United States in the early 1900s in Tarrytown, NY. When the rest of the family arrived, they first moved briefly to Far Rockaway and later found permanent residence in the Bronx. With a permanent address, Olga and Herman were finally able to legally adopt George as their son in 1948. In 1950, Olga gave birth to her son Robert, and the family finally settled in Long Island, NY.