Members of the Teichholz family pose during an excursion to the Carpathian Mountains. 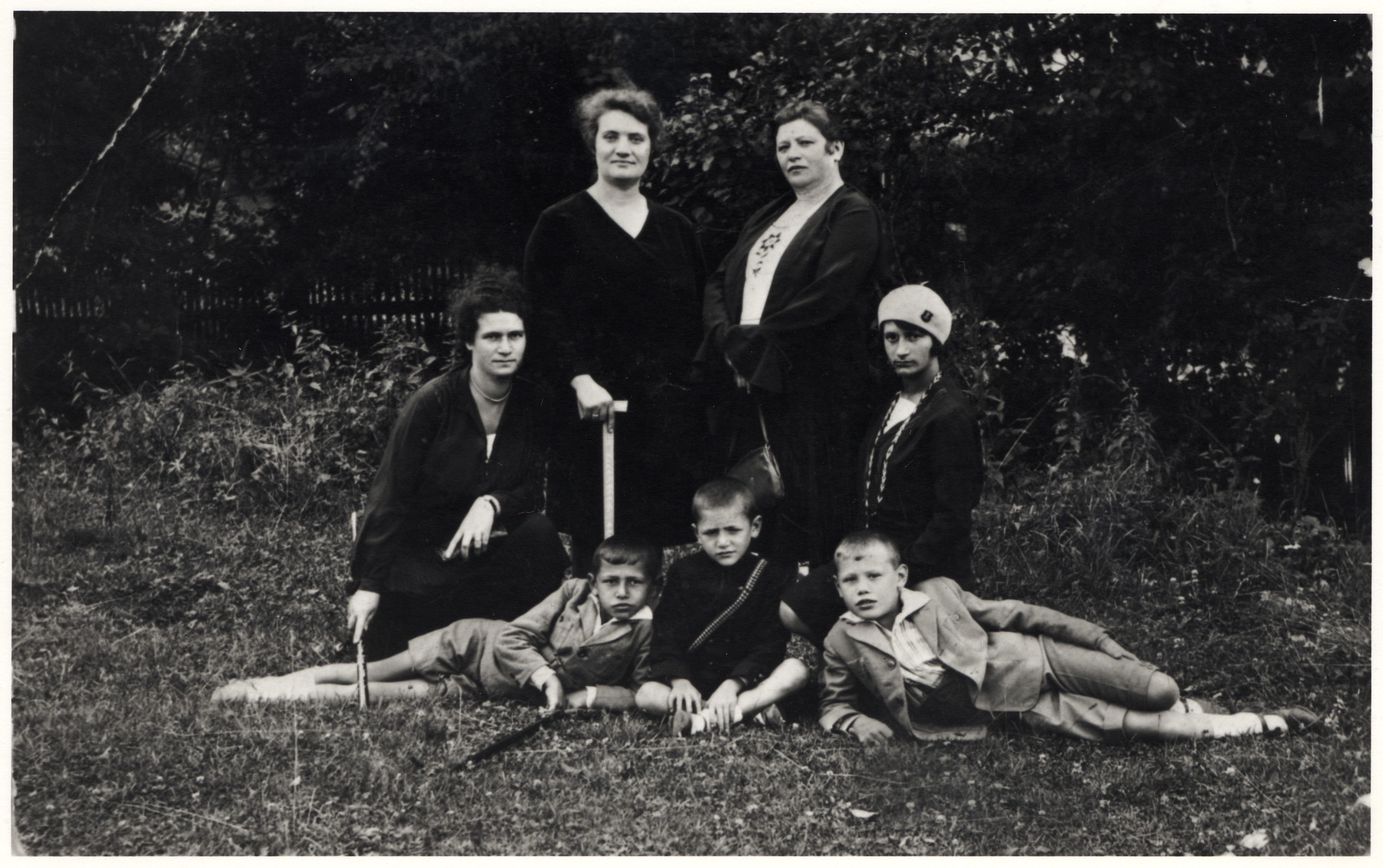 Members of the Teichholz family pose during an excursion to the Carpathian Mountains.

Pictured standing from the left are an unknown person, and Rose Teichholz (mother of the donor). Kneeling are Bella Teichholz and Adela Teichholz (cousins of the donor's father). The children are Baruch, Michael and Ferek Teichholz. All of the adults perished.

Biography
Meyer (Misha) Teichholz (later Michael Sherwood) is the son of Henry Teichholz and Rose Hirschhorn Teichholz. He was born on April 2, 1923 in Tarnopol in eastern Poland. His father sold agricultural machinery. Meyer had two older brothers: Ferek was born in 1919 and Baruch was born in 1920. In the 1930s the family had considered moving to Argentina to join an agricultural colony, but suddenly Henry fell ill unexpectedly and was diagnosed with brain tumor. This ended any plans of emigration. Shortly after the start of WWII, Soviet troops occupied Tarnopol. Henry died soon thereafter. Some members of their extended family were arrested as capitalists and deported to Kazakhstan. Misha (Meyer) however began attending Soviet school, excelled in Russian and was recruited for membership in the Komsomol. After trying to get out of it for a long time, eventually joined though refused to tell mother. In late 1940 his oldest brother Ferek was drafted into Soviet army, and Misha's technical school moved to Lvov. Misha continued to excel in his studies and won a scholarship for college. After learning the news he and his friends held a celebration on Saturday night, June 21, 1941. The following morning they awoke to learn that the German army had invaded. Misha made his way back home where his mother, middle brother and their boarder Konstantine (Kostya) were preparing to flee eastward. At the last moment, Misha's mother decided to remain behind. He never saw her again. The young men traveled with their belongings in a cart driven by a Ukrainian driver. German airplanes began bombing their route. The men hid in a ditch. When the bombing stopped, they discovered that their driver had abandoned them with their belongings and they were left with clothes on back to continue on own. They managed to squeeze into train headed east and eventually arrived in the Soviet Union. Boris soon enlisted in the army; Misha wanted to join as well but was too young. He instead worked for a while in the Ukraine and moved farther east as the front approached. Misha eventually succeeded in enrolling in the army, and traveled with his unit by train towards the front. During one stop, Misha left the train to bathe the horses. The train pulled out before he got back on and as a result Misha was imprisoned for desertion. He finally managed to explain what had happened and returned his unit. During the subsequent year Misha suffered from deprivation and disease but was eventually told that his brother Ferek was working as a lieutenant in Red Army in Urals and wanted him to join him there. Misha finally made his way to Urals. Under his brother's care, he also regained his strength and health. Then on April 4, 1943 he was arrested by the Soviet NKVD and accused of undermining the security of the USSR. Interrogated in prison, he was eventually sentenced to seven years of hard labor in the Gulag. Ferek also was arrested and by coincidence the brothers reunited once again in the prison camp. At first they performed the worst work but eventually obtained admission to the camp orchestra -- Ferek playing the violin and Misha playing the drums - and later got work in the prison pharmacy. Finally in summer the summer of 1947, two years after the end of World War II, Misha was exonerated and released, and his sentence was annulled. Misha traveled to Moscow and from there returned to Poland. In January 1948 he immigrated to Palestine. He later learned that his brother Baruch was shot and killed shortly after joining the army. His mother Rose perished in the Holocaust, most likely in Belzec. In addition some 45 members of Michael's family perished in the Holocaust. Ferek was released from the Gulag following Stalin's death. He remained in the Soviet Union, and worked as a physician until his death in 1993.
[Source: Sherwood, Michael. "The Odyssey"; New York: 2007]