Class portrait of a first grade class in Budapest. 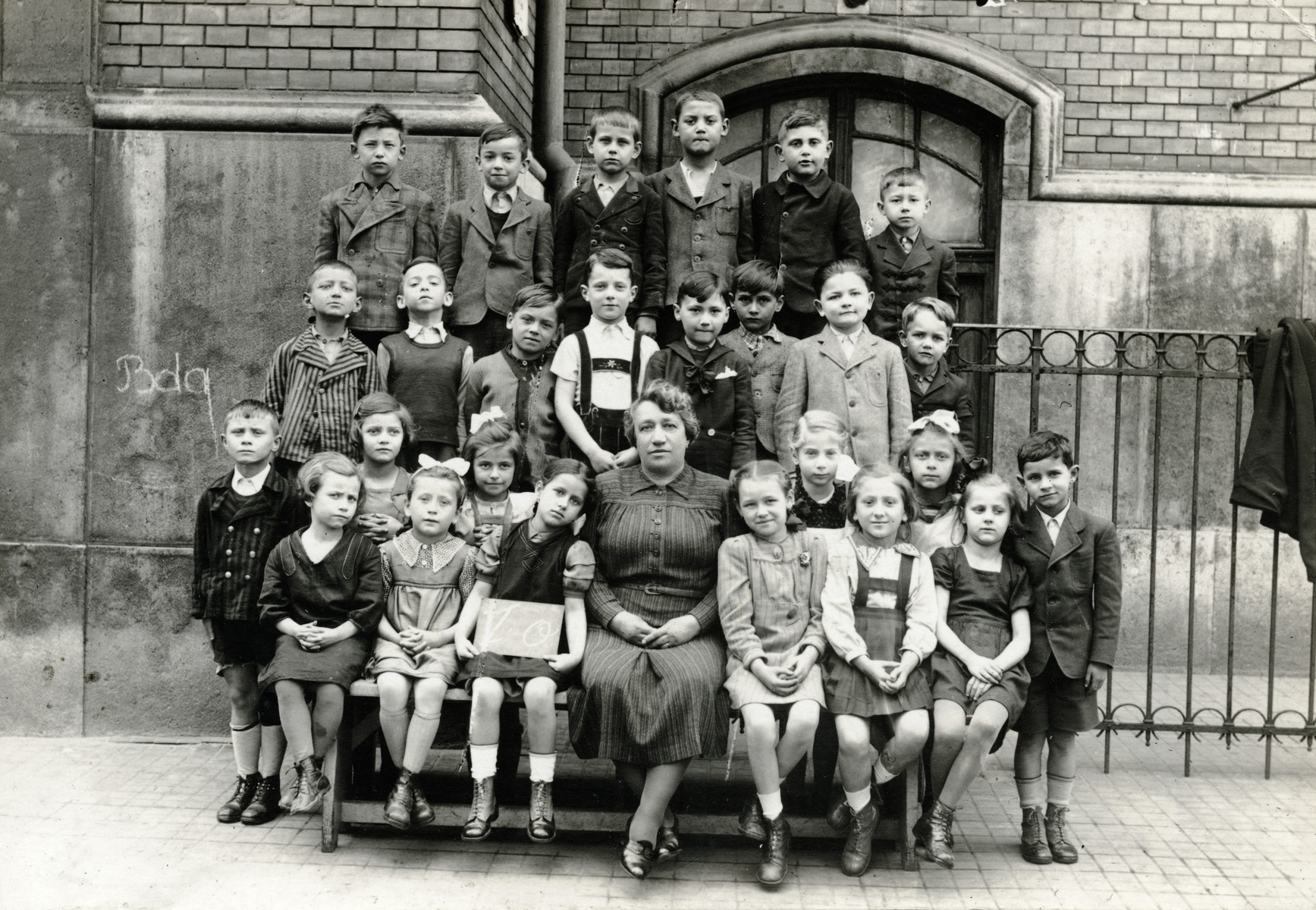 Class portrait of a first grade class in Budapest.

Judith Schonfeld is pictured in the second row, second from the right.

Biography
Judith Munk (born Judith Schonfeld) is the daughter of Ruth and Hugo Schonfeld; her mother was German and her father Hungarian, and she spoke both languages at home. She was born on February 28, 1935 in Budapest; the family was Orthodox. Hugo was a businessman. He owned a candle factory and later a paper factory. Hugo's parents and brother lived in north Hungary in Satoraljaujhely, and Judith spent every summer there until she was seven years old. In June 1938, her younger sister Evike (Eva) was born. Soon afterwards, their lives became much more difficult. The following year Hungary began to enact anti-Jewish laws. Jewish men were forbidden to own their own businesses, and Hugo had to sell his factory to a non-Jewish friend. Though he was permitted to continue to work their, the family had less money and had to move to a smaller apartment. In 1940 he was conscripted for forced labor. Hugo was permitted to return home only for brief visits every few weeks. Ruth remained alone with two small children to navigate her way in a language she did not understand. Therefore in addition to beginning school in 1941 at the age of six, Judith also had to help mother with shopping and conducting official business. For example, it was her responsibility to pick up the family's ration cards. The following year, Ruth gave birth to a son Yissacher (Feri) in January 1942. The following year Jewish children were prohibited from attending school. In the spring of 1944, her grandparents, uncles, aunts and six cousins were all deported to Auschwitz where they perished. Another cousin Marika survived in hiding with her mother. Ruth gave birth to another baby boy born in August 1944. While she was in hospital, Judith had to care for other siblings. Her father meanwhile remained in labor camp; he visited his family for the last time in September 1944 before they went into ghetto. They also received a postcard from him dated December 1944. In late September or early October the rest of the family had to move to a ghetto in Budapest. Since Evike's only pair of shoes was at the shoemaker when the order came, she was relocated in her slippers, and these were the only foot covering she had for the entire winter. The Soviet army liberated Budapest in January, but their difficulties only increased. Judith, her mother and siblings returned to their old apartment, but all their belongings had been stolen. Though neighbors gave them a few blankets, they did not have either enough fuel or food and had to burn Hugo's library to stay warm. The whole family soon became ill. The baby died at end of January and Feri soon afterwards. Her sister Evike contracted pneumonia and died in hospital. Judith and her mother both became ill with typhus but survived. In March Judith went to live with relatives of her cousin Marika in the countryside to recuperate. She then returned to Budapest and recommenced her education. Her father Hugo never returned; Judith never learned how he died. Judith and her mother remained in Budapest until they received visas for England in 1947. They arrived in London in January 1948 and went to live with mother's relatives. Judith participated in Ezra (the Orthodox Jewish youth movement) and obtained a degree in chemistry. She married a teacher, had three children, and after she and her husband retired, moved to Israel.