A group of Jewish children leaves Budapest for Palestine. 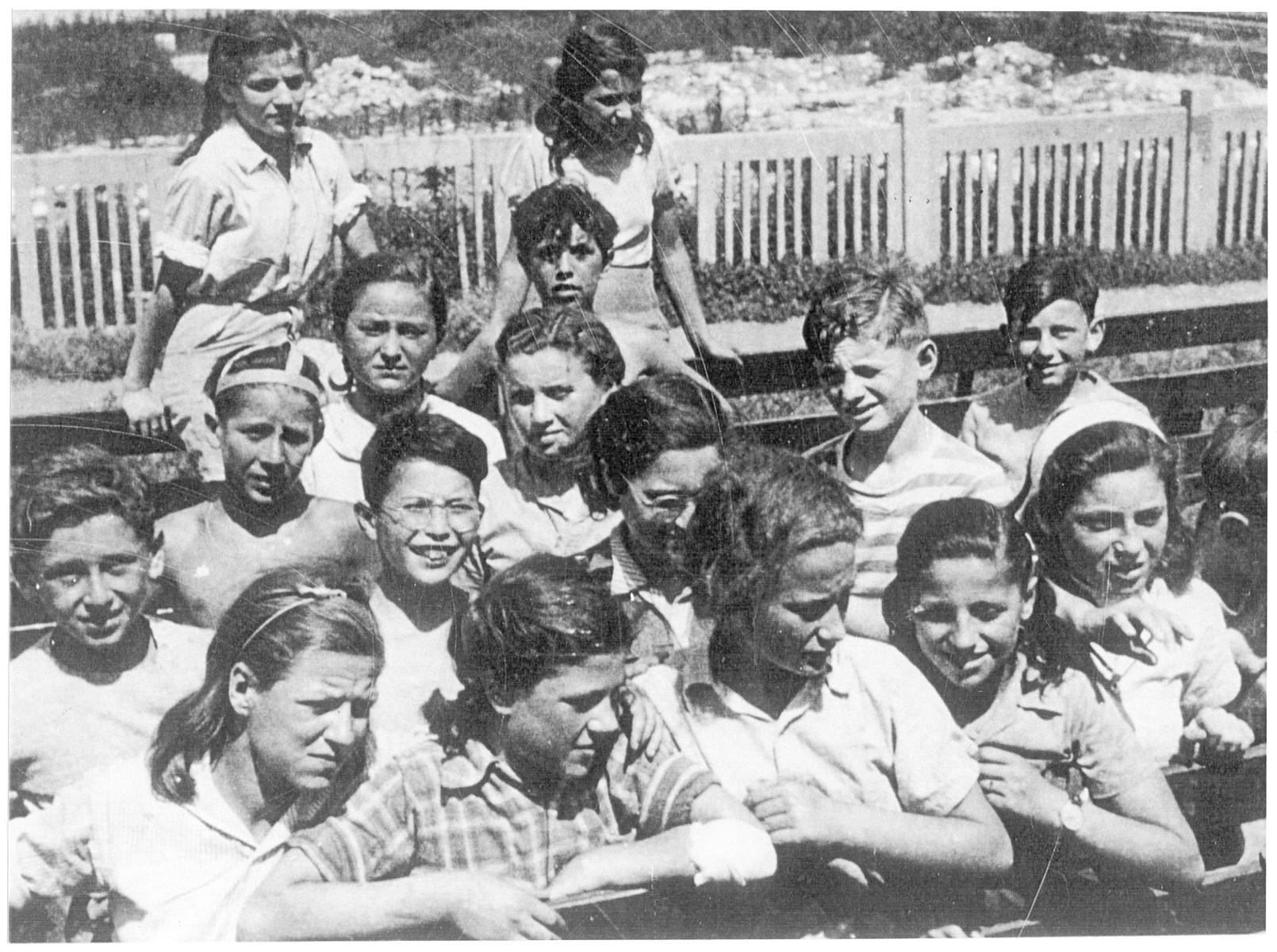 A group of Jewish children leaves Budapest for Palestine.

Among those pictured are Yehuda Schwarz (back row, second from right) and his twin sister, Eva.

Biography
Yehuda Schwarz (born Kalman Schwarz) was born on April 8, 1932 in Szikszo, Hungary to parents Albert Schwartz (b. 1894), a winemaker, and Sabina (Hartman) Schwarz, a homemaker. Yehuda had a twin sister, Eva, and two older siblings, Nandi (b. 1925) and Kati (b. 1929). Between 1939 and 1944 the family lived in Tiszafured, Hungary, where Albert worked for the Rubinstein winery. Previously, he had worked the Lifcowicz winery in Miszkolc, Hungary. The family was very religious, and the children attended a Jewish school. Kalman went to Erzsebet Iskola (school) in Miszkolc, and then to Beit Sefer in Tiszafured. He stayed in school until the Germany invasion in March 1944. On May 8, the family was moved into the Tisa ghetto, which was set up in a brick factory. About 120 Jewish families and a total of some 800 people) were held in the drying area of the factory. The Schwarz family stayed there for about four weeks. In June, Sabina and the younger three children, Kati, Eva, and Kalman, were deported to Auschwitz. They arrived around June 10, after traveling on a train for three or four days. Albert and Nandi were sent to a labor camp.

Upon arrival at Auschwitz, Kalman was separated from the rest of his family and sent with the men. His mother learned that the camp doctor, Dr. Mengele, was looking for twins. Hoping that this might provide her children with better conditions, she requested that Kalman stay with his twin and other family members. Initially, Kalman was placed in F Lager and Eva in D Lager, so they were not able to see each other for some time. Later, when they were taken for experiments, they saw each other on an almost daily basis. At that time, Eva was living with other twin girls in the Roma (Gypsy) barracks. The kapo who was responsible for them, Erno Zvi Spiegel, tried to make sure that the twins received full food rations. Still, the children were very hungry.

As the war neared its end, the Germans began to empty the camps. On January 18, 1945, Eva was taken on a death march. Kalman was left behind with about 35 other twins. Spiegel stayed with them, fully aware of the danger involved. On January 28, Spiegel told the twins that they should leave since the situation was not safe. He took them to the Hungarian border and ensured that each of the children could return to his or her home town. Kalman took a train to Tisa, and then walked across the river to Tiszafured, a journey of about a month and a half. He was the first of his family to return, and was taken in and cared for by a Jewish photographer named Benedik. Eva, who had been sent on a death march from Auschwitz, ended up in Ravensbrueck, where she was liberated on May 9, 1945. She returned to Tiszafured and found Kalman. Later, their oldest brother Nandi returned from a labor battalion in Mauthausen. Their father had been liberated in Bergen-Belsen, but had contracted typhus and died there. Their mother, Sabina, and sister Kati also did not survive.

The three siblings stayed together in Tiszafured for some time. In August 1945, they moved to Budapest, where the twins stayed in an orphanage, "Mexico #3," (probably run by the Jewish Joint Distribution Committee) and attended Jewish school. After a year there, they tried to immigrate to Palestine via Austria and Germany. They stayed for two years in a children's home near Ansbach, with children from Dror and Hashomer Hatzair. They boarded the "Exodus," bound for Palestine, but were forced to turn back and again landed in Ansbach. In 1948, Kalman and Eva tried again, boarding the ship "Providence" in Marseille. This time they succeeded; after arriving in Haifa in May they were sent to a youth aliyah kibbutz with another set of Mengele twins. Kalman (now Yehuda) studied, joined the army, became a member of the kibbutz, married, and became a high school principal. Eva also joined the army and lived in a kibbutz, but immigrated to Canada in 1959. She had a son and a daughter, and died in 1978.