Portrait of Maurice, Esther and Vladimir Weeg outside an estate. 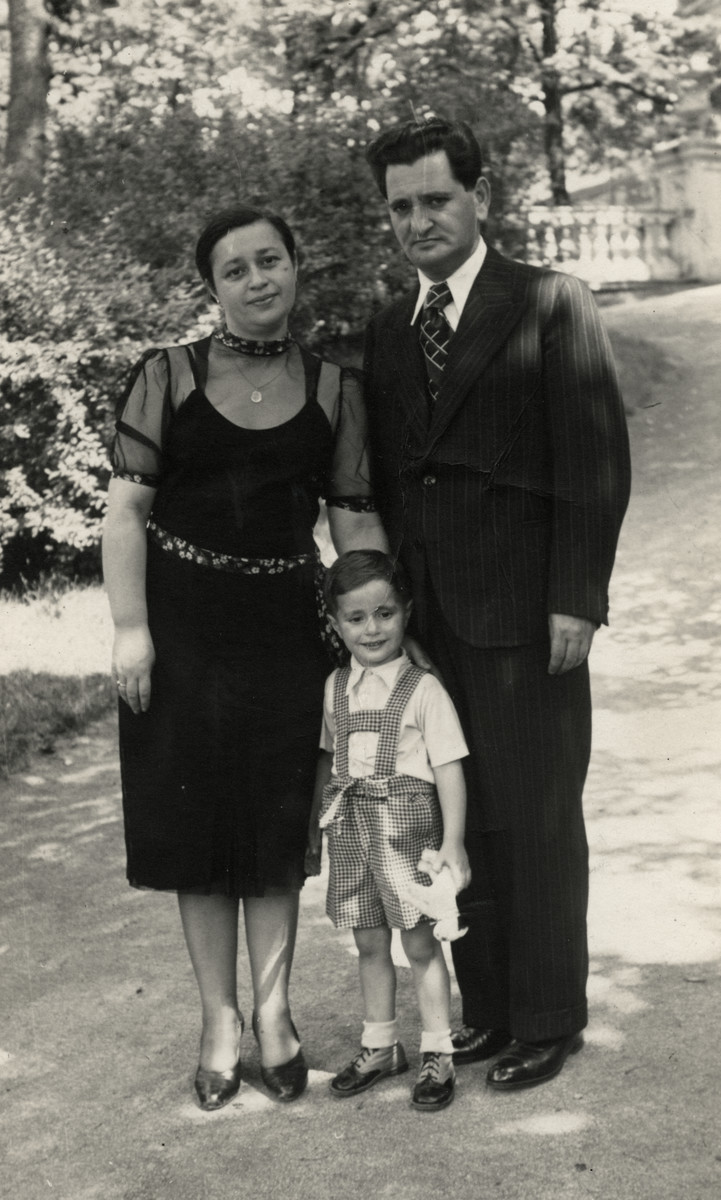 Portrait of Maurice, Esther and Vladimir Weeg outside an estate.

Biography
William Weeg (born Vladimir Weeg) is the son of Maurice Weeg (b. April 1897, Galicia) and Esther Traub (b. January 1907, Panevezys, Lithuania). He was born on October 21, 1934 in Prague where his father was a physician. He had one sibling who died of cerebral meningitis before he was born. Maurice studied internal medicine in Prague where he met his wife (who was studying music). Prior to the war the family lived in Marienbad where Maurice had a very busy practice with patients referred to him by physicians from all over Europe. Maurice was a Revisionist Zionist and spent most of his spare time meeting and planning the way he envisioned the birth of the Jewish state. Maurice met Jabotinsky during the World Jewish Congress in Basel, and later invited him to serve as William's godfather. On March 15, 1939, Germany invaded the Czech provinces of Bohemia and Moravia, and five months later, on August 10, the left Prague on the last train leaving the city. Maurice had friends in England and he headed there hoping either to obtain a visa to remain or a certificate for Palestine. Bill and his mother disembarked in Paris and stayed with friends waiting for the news. Unfortunately, Maurice was unable to obtain either, but his friends introduced him to people who might be able to help. Maurice met a bank manager in England, who upon discovering that Maurice was a Free Mason, offered his support and contacts. He told Maurice that young English doctors from India who had been working on tea plantations, were being drafted for the British army, and they needed replacements. The banker found work for Maurice in India with the Assam Tea Estates. Maurice joined his wife and son in France, and in the spring of 1940 they sailed from Marseille on the ship "City of Venice." Eventually, the family landed in Bombay and took a train to Calcutta. Esther's brother Bernard already was living in Dibrugarh, India. In addition her sister, Shifra lived in India but in an unhappy marriage. She was encouraged to leave her husband, and she returned to Panevezys with her son; they later perished in the Holocaust.

They Weegs first settled in Dibrugarh and later in Sonari where they were posted throughout the war years. Maurice and Esther, who had come from traditional religious homes, had to find ways to maintain their Judaism far from a large community. They lived near the Burmese border, and following the American entry into World War II, American Jewish servicemen spent Jewish holidays at the Weeg's home. From 1941 to 1947 Bill attended a boarding school in Darjeeling to obtain a proper education. Afterwards Esther took Bill to England. The trip took three months and they were quarantined in Ceylon due to the yellow fever outbreak. Bill attended Beaconsfield, a Jewish school in Sussex, from 1947-1948 and then entered Badingham College and a technical college in Bradford where he studied textiles for three years. Bill was then drafted into the British Army and then sent to Kenya. In 1951, Bill's parents relocated to London where his father set up a private practice. Bill later moved to the United States and then to South Africa where he married. In 1972 he immigrated to Israel. He has three daughters and two grandchildren. Though Bill and his parents survived the Holocaust, most of their extended family in Europe perished.