Eva Tikotin hugs her two young daughters, Johanna and Leentje, prior to their going into hiding. 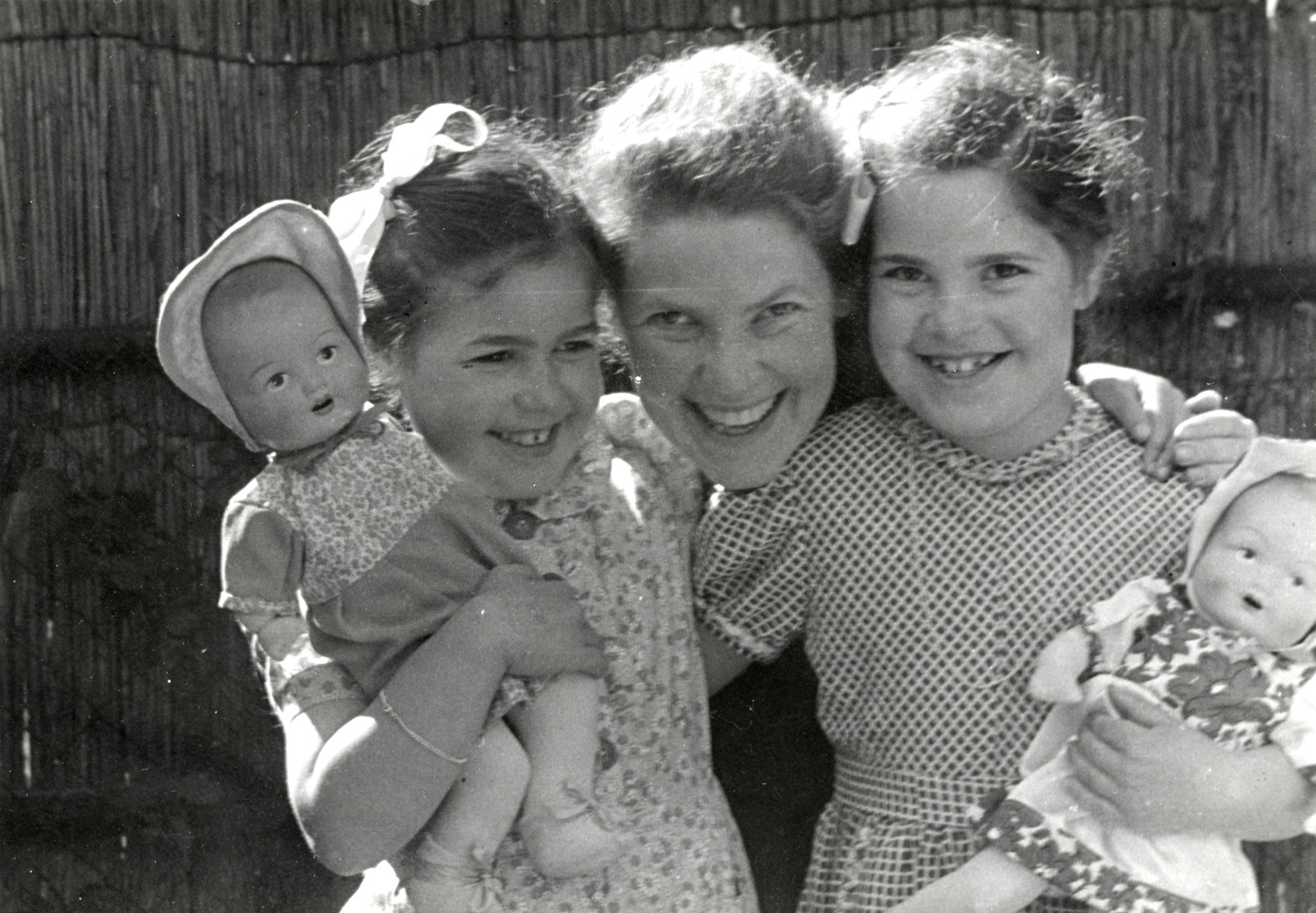 Eva Tikotin hugs her two young daughters, Johanna and Leentje, prior to their going into hiding.

She gave Leentje this photograph to take with her into hiding so that she would remember her mother, but Leentje had to give it up for security reasons.

Biography
Ilana Drukker (born Leentje Tikotin) is the daughter of Felix Tikotin (b. Glogau (Silesia in 1893) and Eva Dorothea Licht (b. 1912 Berlin). She was born March 5, 1938 in The Hague, Holland and had two siblings: Johanna (b. 1939) and Cecilia (b. 1946). Felix, an architect by profession, became a Japanese art dealer and opened a gallery in Berlin in 1929. The family was assimilated but followed Jewish traditions. In 1933 Felix was asked by the cultural councilor Otto Kuemmel in Berlin if he would send his collection of Japanese art to the Royal Palace in Denmark for an exhibition. While en route to Denmark to oversee the return of his collection at the end of the exhibition, Felix learned of the Reichstag fire. His friend, Mr. Henriques, a Sephardic Jewish banker, arranged to send the artwork to Holland. Later the other artwork from Felix's collection was also shipped to Holland. Felix never returned to Berlin and opened a new gallery in Amsterdam in 1933.

Leentje's mother, Eva Licht, also sought refuge in Holland and found a job working in Felix's gallery. They went together on a trip to Japan, via the United States. On Eva's birthday Felix proposed, and they wed the following day in New York City. After purchasing additional Japanese art, Felix and Eva returned to the States where they traveled cross-country looking for a place to settle. They liked Seattle but in the interim received a letter from Felix's mother saying that she had escaped from Germany to Holland. Since they wanted to be with her, they returned to Holland and moved the gallery and apartment to The Hague where Leentje was born.

Following the German invasion of Western Europe, in September 1940, all the German Jews living near the North Sea were evacuated. Leentje's parents were given 24 hours to leave the coastal area and move 30 kilometers east. Felix rented a shop in Alphen which had a large store window facing the street. He moved the family there until he found more suitable lodgings. Former neighbors in The Hague cared for Felix's collection. They remained in Alphen until July 1942 when the family was told to report to the Schouwburg Theater, in Amsterdam - the deportation center for Dutch Jews. Felix decided not to appear and instead brought his two daughters to a farm in a tiny hamlet south of Amsterdam. He told them they were going for vacation. Leentje was told that she had to watch over of her little sister and make sure she wouldn't cry. The girls had to learn Dutch very quickly as they spoke German at home. The Tikotins stayed in a cowshed that was connected to the house. A blanket divided the room, and another family lived on the other side. Soon after they had to leave this place as Germans searched the farm.

Leentje's father contacted a resistance movement the "Assembly of Believers" who wanted to save Jewish souls and were helping place Jewish children in hiding places. Leentje first had a photo of her mother with her, but it confiscated as a security measure. From 1942-1945 Leentje and her sister remained together in numerous hiding places. They had their hair dyed so as to look less Jewish. Someone, spotting Leentje's brown eyes once asked her why she didn't wash them. The girls forgot how to speak German and did not remember their parents even though her mother occasionally visited them, describing herself as an aunt. Eva, who had studied in an interpreters' school, spoke several languages; she also did not look particularly Jewish having had had her nose fixed in Berlin. She worked for the underground and also knew where her husband was hiding. At one point she brought the girls to a very elegant house in Rotterdam which had a piano and a lot of toys. They hoped to stay there but soon heard loud crying and sobs from another room and had to leave. They learned that the Gestapo had killed the landlady's husband that very day. They managed to be picked up by their contact, who brought them to another hideout. They were taken to the half brother of their main contact Wouter van Wijngaarden who belonged to the Assembly of Believers. They remained there for a period of time. He and his half -brother Dirk Van der Vaart were honored as a Righteous Among the Nations in 1983.

When the war ended, Leentje's parents came to get them. The girls had been taught to pray and did not want Jewish parents. They went to live in a house belonging to the family of Wouter's wife in Nieuwkoop and some six months later returned to The Hague. Since the Tikotins were one of the very few family units to have survived intact, they served as a kind of "absorption center" for friends and relatives returning from the camps without family. Eva's best friend, whose husband had died on the way back to Holland in the Troebitz train, came with her young son who drowned in the canal next to the house.

After this experience Eva broke down mentally despite the birth of a third daughter in 1946. She spent the rest of her life in and out of hospitals. Leentje, now Ilana, immigrated to Israel in 1956 at the age of 18. She also brought her youngest sister to Israel as well, but she left after high school and returned to Europe. The scars of the war were heavily felt on her and she committed suicide in 1971. Eva was unable to live with the guilt and also took her own life a few years later in 1977.

Leentje's father managed to continue his art dealer's business after the war to some extent. His collection had been stolen during the war and some five years later the police appeared at his doorstep with photos of Japanese art hoping for his expertise in authenticating them. It turned out to be his collection which was returned in its entirety. In the late 50's Felix Tikotin donated his collection to the city of Haifa and bought the Kisch house and surrounding plot to keep and exhibit it. The museum was opened in 1960. It is named in his honor and functions to this day as the Tikotin Museum of Japanese Art.

Ilana married in Israel to Alfred Drukker, another Dutch survivor who had been in Westerbork and Terezin. He is a pediatric nephrologist. Ilana headed the office of the U.N High Commissioner for Refugees in Israel. Today both are retired. They are parents to four children and five grandchildren.