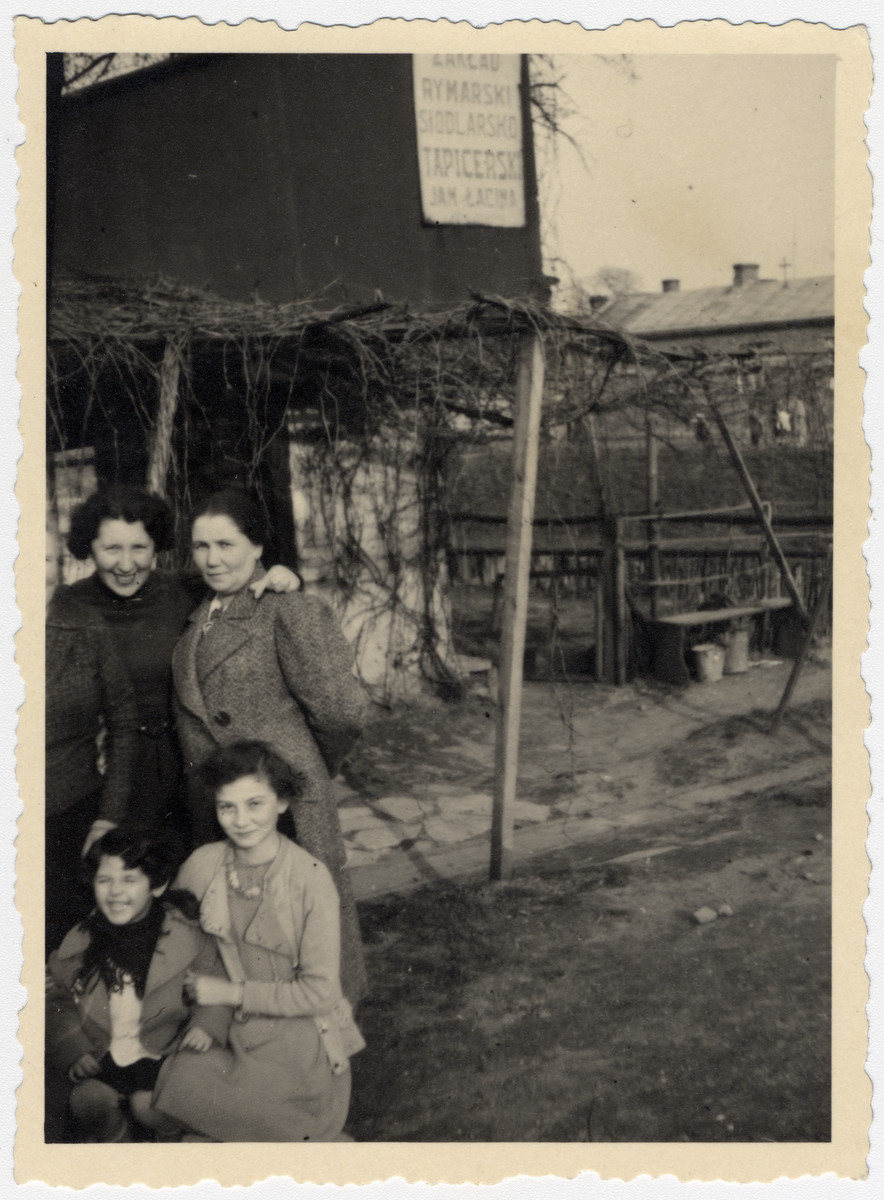 They are standing in front of Jan Lacina factory in Tarnow nearby where Cesia's aunt lived. The factory would later be the same one in which she worked alongside her future polish aid-givers in the Tarnow ghetto.

Biography
Cesia Ratner (born Cesia Honig, later Cesia Ritter) was the only child of Naftali and Malka (nee Rozenblit) Honig. She was born on January 10, 1926 in Tarnow, Poland where her father ran a grain exchange. She had a large extended family, and her parents had siblings in Vienna, Berlin, and the United States. Cesia attended Polish schools, took piano lessons, and had a private Hebrew tutor.

The last year before the war she attended a private Hebrew school called Safa Berura. She marched with her school in a patriotic parade, and other Poles greeted them with jeering and screaming. This was Cesia's first experience with antisemitism, and she returned home in tears saying she no longer wanted to live in Poland. Her parents applied for American visas and were awaiting their immigration number, when Germany invaded Poland on September 1, 1939. Cesia's parents decided to flee and told her to pack a bag of enough clothing for a month. The Honigs took a horse and carriage and joined other refugees fleeing to the east. Cesia packed her favorite fancy clothes, which were totally unsuited to the ordeal ahead.

After a few days, they encountered Russian soldiers who were now occupying Eastern Poland. The Honigs spent a short time in Lvov and then continued to Stanislawow. Cesia stayed in bed most of the time because she had no winter clothes. Her parents did not want to go deeper into Russia because they had left all their possessions in Tarnow and had heard horror stories about life in the Soviet Union. Instead the Russians expelled them to the smaller town of Brzezany where they remained for the next year and a half.

After war broke out between Russia and Germany in June 1941, Cesia's parents wanted to move to the Soviet interior, but now the Russians wouldn't allow them to cross the border. Immediately after the German invasion, Ukrainians unleashed a murderous one-day pogrom. The Honigs stayed inside protected by non-Jewish neighbors, but they heard the screams of victims outside. After the pogrom ended, the Germans announced that Jews who had come from other cities could register to go home. The Honigs returned to Tarnow and immediately went to their grandfather's home. He was shocked to see them and told them that they had to hide because the Germans would kill anyone who returned from Soviet territory. Cesia and her parents lived with him for about two months and then found another place to stay. Within the year, Cesia's grandfather was shot and killed for resisting being taken to a work camp.

In 1942 the Germans created a ghetto surrounded by barbed wire. Cesia, her parents and extended family moved into the ghetto and shared one room among them. Everyone was assigned to force labor. Cesia worked sewing saddles in a workshop outside the ghetto boundaries where many Poles also worked. Soon afterwards, all the ghetto inhabitants underwent a selection. Cesia's father received a forced labor stamp, but the German in charge marked Cesia and her mother's papers with a K. Someone explained that those with a K, mostly women and children, would be shot the next day. They returned to their apartment and hid behind a false wall. However, a Jewish policeman found them and brought them out to join a procession of those being led out of the ghetto. When Cesia walked past the one factory within the ghetto boundaries, suddenly two Jewish boys whom she had recently met grabbed her and yanked her inside. They told her they would tell her father where she was. Cesia could not bear the thought that she would survive while her mother would be killed and wanted to give herself up, but her father arrived and told her that she had to remain alive for his sake.

After surviving the ordeal, she and her father returned to their previous work assignments. Cesia's father worked in a cement factory where a sadist beat him every day. Cesia continued to work in the saddle factory. One day they heard rumors there would soon be another selection. Cesia's father gave her a diamond ring and told her to find a Pole who could hide her for one week. Cesia approached two brothers Zbyszek and Lutek Mikovski who worked at her factory. Their family agreed to hide Cesia for a week in exchange for the ring. The Mikovskis (father Franciszek, his infirm wife, and the two boys) lived in a small one room apartment and were extremely poor. During the week, Cesia cleaned and cooked for them and cared for the wife. At the end of the week, Mr. Mikovski said she had become like the daughter he had had always wanted and asked her to remain. He confessed that he had always been an antisemite, but he had never before met a Jew. Now that he knew Cesia, he wanted to care for her and help her survive. Cesia's father encouraged her to accept the offer. The Mikovski boys regularly smuggled letters back and forth between Cesia and her father. One day her father wrote and told her that the Germans planned to liquidate the ghetto and asked whether he could also live with the Mikovskis. Since there was barely enough room for the five people already staying there, Cesia had to turn down her father's request. She became despondent and left the apartment with the intention of turning herself in to the Gestapo. Mr. Mikovski found her, brought her back to the apartment, told her this was not her fault and nursed her back to health.

Meanwhile, rumors spread that the Mikovskis were hiding a Jew. Once the Germans came to search their building, and Cesia spent the entire day hiding in the chimney. Several times the area was bombed, and Cesia could not go to the bomb shelter with the other residents of the building. Mr. Mikovski decided to move the family to the village where he grew up. He told the villagers that Cesia was his niece. After some time, the Germans came to the village to conscript the young people for forced labor. Mr. Mikovski needed Cesia to care for his wife and wanted to protect her like a daughter. He therefore bribed a doctor to say she had had heart palpitations and was too sick to work. One day Mr. Mikovski said they needed to move to the village where his wife grew up. Though he didn't tell Cesia at the time, she later found out that he had received a letter from a priest saying that people suspected she was Jewish and that she was endangering the village. They remained in the second village until their liberation by the Russians late 1944.

After liberation Cesia returned to Tarnow with Mr. Mikovski to search for her family and register with the Jewish community. She went to her parent's home, but the Polish woman who was living there told her that the house no longer belonged to her. Mr. Mikovski told her she could always stay with them, but she needed to keep pretending she was his niece on account of the continued antisemitism. Cesia attended school using the name Cecilia Mikovska, but she kept searching for her own family. She found distant relatives who offered to take her to United States. Mr. Mikovski gave her his blessing to leave. Cesia sold everything that she owned and gave the money to Mr. Mikovski. She then traveled to Belgium and an uncle paid for her to study design and pattern making in an ORT school. She began corresponding with an American boy who received permission for her to get a temporary American visa to come visit him. The Consulate granted permission, assuming she was his fiancée. Cesia's aunt and uncle paid her passage; she arrived on November 1, 1946 and was greeted by about 60 family members. She lived with father's brothers, who offered to to provide for her and pay for her education. The false fiancée was willing to marry, her but Cesia was not ready. After a few years she needed to marry or face deportation. In 1950 Cesia married Saul Ritter, a World War II veteran, and in 1996 she remarried Marc Ratner, a Holocaust survivor.