Close-up portrait of two prisoners in the Im Fout labor camp in Morocco. 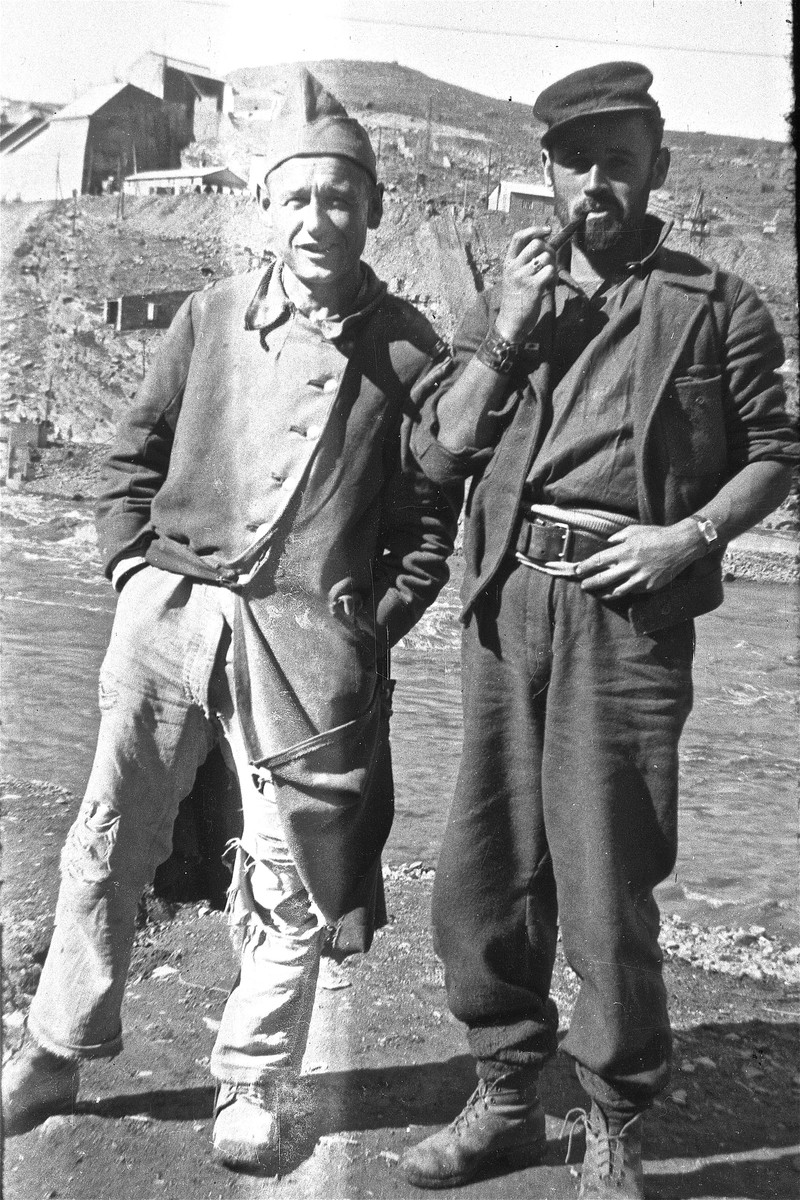 Close-up portrait of two prisoners in the Im Fout labor camp in Morocco.

Pictured are Sause (left) and Dunn, an Irishman who was training to be a "White Priest" in Algiers. He was picked-up while on vacation in Morocco as an "undesirable foreigner."

Biography
Sami Dorra is the youngest child of Nazli Dorra, née Mathalon, and Vitali-Haïm Dorra. Sami was born in Beirut, Lebanon, on March 28, 1920. He had two older brothers and a sister born around the turn of the century and a brother 6 years older. The Dorra family had lived in Syria for many generations, but held Iranian passports. His father had traded in Austria during WW I and decided to move his family there. Nazli Mathalon spoke Arabic to her children and never learned to read or write in any European languages. After Sami was old enough to stand a long boat trip, the family left for Vienna in 1921; they lived in the Vienna suburbs for about 5 years. At first, his father did well because of post-war inflation, but the Socialist government made it difficult for Vitali to collect rent from recalcitrant tenants living in the buildings he had purchased. They then moved to Paris and settled in the 15th arrondissement. Vitali opened a shop in the 2nd arrondissement, Passage Vivienne, where he sold fabric for men's clothing. Sami spoke only German upon arrival, but quickly learned French. He was enrolled in the Lycée Montaigne as a boarder at the age of seven. In 1933 his uncle officiated at his bar mitzvah according to the Sephardic rite.

During the 1930s, Sami started to become politically aware. He was an enthusiastic supporter of the Front Populaire and in comparison to the other students, his opinions were much further to the left. He passed his baccalaureate and enrolled in the Sorbonne to study physics and mathematics. When he reached the age of 20, in March, 1940, Sami's father encouraged him to apply for French citizenship. Two days before the Germans reached Paris in June, 1940, Sami, his elder brother, and his cousin Moïse Lévy took bikes and headed towards the south of France. Moïse embarked for London from Bordeaux, his brother stopped at the town of Castres in the Tarn to wait for a shipment of cloth his father had sent from Paris, and Sami went on alone to Port Vendres in the Pyrénées-Orientales, on the French coast. He smuggled himself onto a ship full of North African workers from Kabylie who were being repatriated by the French army. When it docked in Algiers, he managed to stay on in Algeria, despite his lack of proper papers. There, he enrolled in the only French university still functioning in North Africa.

Over the Christmas vacation in 1940, he managed to get to Casablanca where an uncle and aunt lived. Since a Jewish professor who was his mentor had been forced out of his job, Sami decided not to return to Algiers. In the fall of 1941, he was told to report to the local police, who promptly arrested him because he lacked the proper resident's permit and visas. He was immediately taken by train to the camp of Oued Zem, a holding place or "camp de triage" before decisions were made on where to send the internees. Most of those in the group were foreigners, though not necessarily Jews.

After about 3 weeks, he was sent to the camp of Im Fout, about 25 kilometers from Casablanca, where a huge damn was being constructed. Most of the Jews in his situation were sent further south to work on the railroad at Bou Arfa, but Sami Dorra adamantly maintained that he was awaiting transit visas that would arrive any day, so that it was not a good idea to send him so far south. Living and work conditions were harsh; many of the workers fell ill with typhus. Sami caught amoebic dysentery and was taken to the hospital in Casablanca. However, as he and the camp driver arrived after 7 pm, he could not be admitted. He convinced his escorts to drop him at his uncle's where he went into hiding until Morocco was liberated in November, 1942.

Sami's parents had received papers declaring them "honorary Aryans" from the Iranian Embassy in Paris, and this seemed to have protected them. They spent the war in Nice. The Aryan administrator assigned to supervise his father's business was honest, and Vitali was able to resume working after Paris was liberated.

The French authorities finally tracked down Sami and wanted to send him back to Im Fout, but the Iranian consulate helped Sami, having turned "pro-Allies", hoping to be on the winning side, and provided him with a certificate stating he was essential for the war effort. After the arrival of the Americans in Morocco, Sami worked with them at various jobs.

Sami met Elisabeth Geiger, an American woman from Illinois working for the Red Cross in Morocco, and they married in 1945. He visited his parents in France in 1946 to visit his parents and returned to Morocco, where he worked in various capacities for local newspapers until he left for France in 1950. For a while, he worked with his brother and then became a salesman for foreign garment manufacturers including Israel. Later, he was a sale representative for French companies in Germany. His son Francis, now a university professor in mathematics, was born in Paris in 1951. A grandson is currently studying at the Ecole Normale Supérieure in Lyon and a granddaughter is in her first year of studies to become a doctor.