Teenagers from the Blankenesee children's home visit the grounds of the former Bergen-Belsen concentration camp. 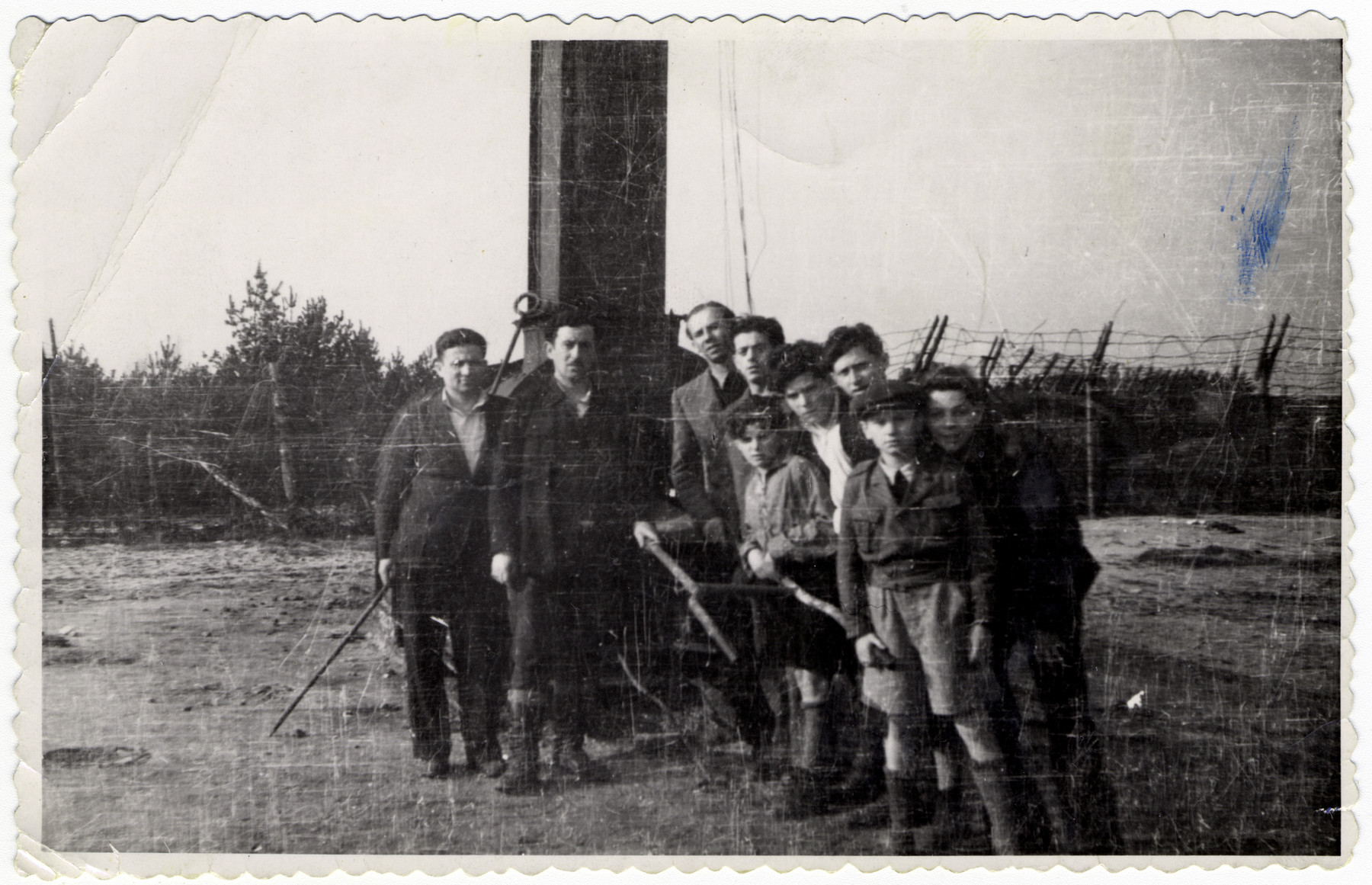 Teenagers from the Blankenesee children's home visit the grounds of the former Bergen-Belsen concentration camp.

George is kneeling on the far right.

Biography
George Schwab is the son of Arkadi Jakob Aron Schwab (b. 1884) and Klara Jakobson Schwab (b. 1903). George was born on November 25,1931in Libau (Liepaja), Latvia where his father was a gastroenterologist, and his mother was a trained musician. George had one older brother, Bernhard Boris who was born in 1921. After the Soviet Union occupied Libau in 1940, the Soviets confiscated the family's apartment and his father's medical practice and library. Germany invaded the Soviet Union the following year, in June 1941 and conquered Latvia. Persecutions and violence against the Jewish community began almost immediately. In a mass action against Jews in July 1941, Arkadi Jakob Schwab was among those arrested, tortured and killed. Klara was forced to work as the chambermaid to the Latvian mistress of the head of the SD, and Bernhard was forced to work as an automotive electrician for the Wehrmacht. The family was ordered into the Libau ghetto in 1942, and George became a runner for the ghetto commandant. On Yom Kippur evening, October 1943, the Germans liquidated the ghetto and transported the remaining Jews to the Kaiserwald concentration camp in Riga. George and his mother worked at the Tanklager (a fuel storage depot) . Bernhard was transported to Kasernierung Reichsbahn work camp. Since that was a better work camp, Klara succeeded in bribing the commandant to allow George to join his brother. With the approach of the Soviet army in 1944, the work camp was liquidated. Bernhard was slaughtered at the Rumbula forest near Riga in a mass action carried out by the Nazis and their Latvian collaborators. George was shipped to the Stutthof concentration camp near Danzig. On board the ship he reunited with his mother. He was held briefly at Stutthof concentration camp and in August was transferred to Stolp, Germany to work at the Reichsbahn. George returned to Stutthof at the end of April 1945, and the prisoners were chased onto barges. After the German guards abandoned them while sailing on the North Sea, the prisoners finally landed on May 3, 1945 in Neustadt/Holstein. There they were liberated by the British. Suffering from general bodily weakness, George was hospitalized twice in Neustadt. After the second time he was taken by the British to a Latvian children's home five kilometers away. George escaped and soon left for Hamburg in search of relatives. For the next nine months he stayed on the Warburg estate in Blankenese, Hamburg, which had been transformed into a children's home. George succeeded in reuniting with his mother in Berlin in May 1946. They immigrated together to the United States in February 1947 on board the troop carrier, Marine Perch. George resumed his education and received his BA from City College and his MA and PhD from Columbia. He taught history for forty years as a professor of history at the City University of New York. In 1974, together with Hans Morgenthau, he founded the National Committee on American Foreign Policy, of which he became the president for 22 years. He began his teaching career at Columbia University, and transferred to CUNY City College and Graduate Center.