Ruth Eisenmann (Lange) poses with her rescuers at her wedding. 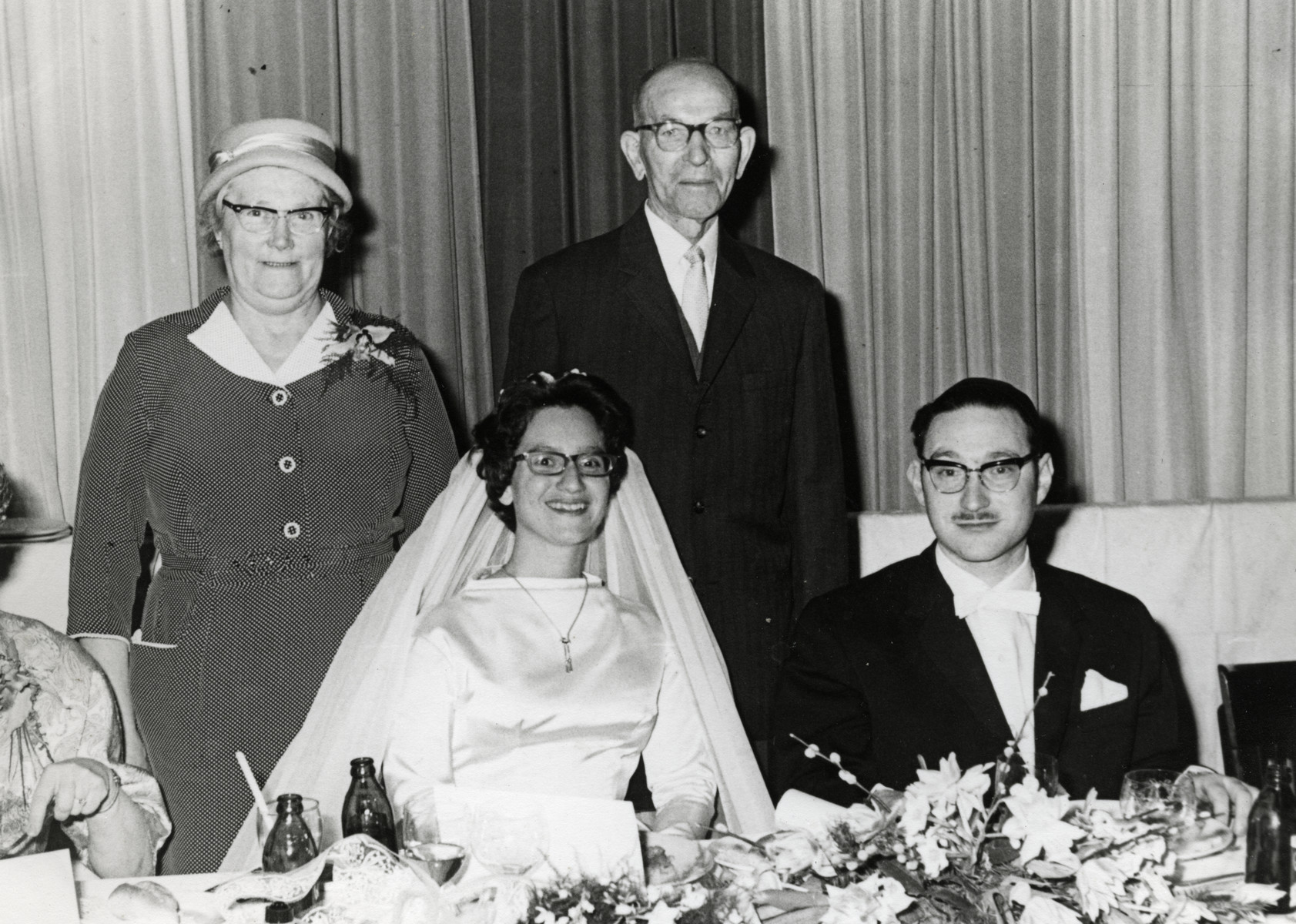 Ruth Eisenmann (Lange) poses with her rescuers at her wedding.

Pictured are Ruth and Gershon Lange and Bertha Hugygens-Busch and Meryn Hugygens.

Ruth's father understood the gravity of their situation. When the Dutch NSPD came to their house to pick him up, he threw Lysol on the entrance of the house and told them that there were polio victims inside. They turned around and left. The next day the family went into hiding. Shmuel had connections with the underground and everyone was sent to a different hiding place. Ruth and her siblings went together to the train station, each one accompanied by a different member of the Westerweel underground. Her parents told them they were going on vacation to friends' houses. She remained with her escort for the first night. From the train they went by bike to his house where his own children gave her a very warm welcome and a present of a doll.

From there she was taken to a family in Kerkenrade where she remained from October 1- January 15, 1944. She was given the false name Mariettje. The couple owned a small grocery store but had no children, and although the man of the house was lovely, his wife was extremely mean. He once tried to give her candy, but his wife grabbed it from her. Ruth slept on a couch in the living room in a loft like alcove. She could not get down to use the bathroom and began to wet her bed. One day when she was outside she heard her brother's voice and managed to see him for a few minutes. He was staying in a neighboring house, but they could not meet; she saw his face was covered with sores.

From there Ruth was moved to an older Catholic couple by the name of Meryn Hugygens and Bertha Huygens- Busch in the town of Brunsan. They were in their 40's and childless. Mr. Hugygens worked in the coal mines, and his wife was a housewife. They were wonderful people and took great care of Ruth. They had a vegetable garden and Ruth helped tend to it. They had chickens which produced eggs. Food was not scarce; they had cake and other delicacies. The couple told the neighbors that Ruth was a relative from central Holland; she called them aunt and uncle. Across the street was another family who had taken in a hidden child. Ruth attended church every Sunday and recited prayers before meals. She slept in a room near the couple. The bathroom was outside the house; once a week she had a bath. One day she went to kindergarten in the convent, but that same day Dutch Nazis appeared, and the nun put her in a cupboard and told her not to look or make a sound. The children were told not to say a word. The Nazis looked around and left for another class where they picked up a Jewish boy. Ruth did not return to kindergarten.

During this time her parents hid in a few different places, sometimes together, sometimes apart. When Hennie became pregnant, she moved to a family whose wife was also pregnant. She gave birth to a son Ephraim on May 1, 1944 in a school of midwives. The woman she was staying with gave birth to her child nine days later.

At the end of December or beginning of January 1945 Canadians arrived and liberated the area where Ruth was hiding. The neighbors across the street asked her what was her real name and she proudly said "Ruth bat Shmuel Halevi Eisenmann". Her parents arrived the same week. Her adopted parents told her that they were coming. Ruth was not interested. Her adopted father was very unhappy. During the time Ruth had stayed with them, his wife had a miscarriage. Ruth continued to visit them every summer for a week at a time, as did her brothers with their adopted hiding families. The Hugygens attended her wedding ceremony in February 1962 to Gershon Lange, a survivor from Bergen-Belsen. They immigrated to Israel in 1969. Ruth has six children and 25 grandchildren.