Group portrait of children in the Jewish kindergarten of Ludwigshafen dressed in Purim costumes. 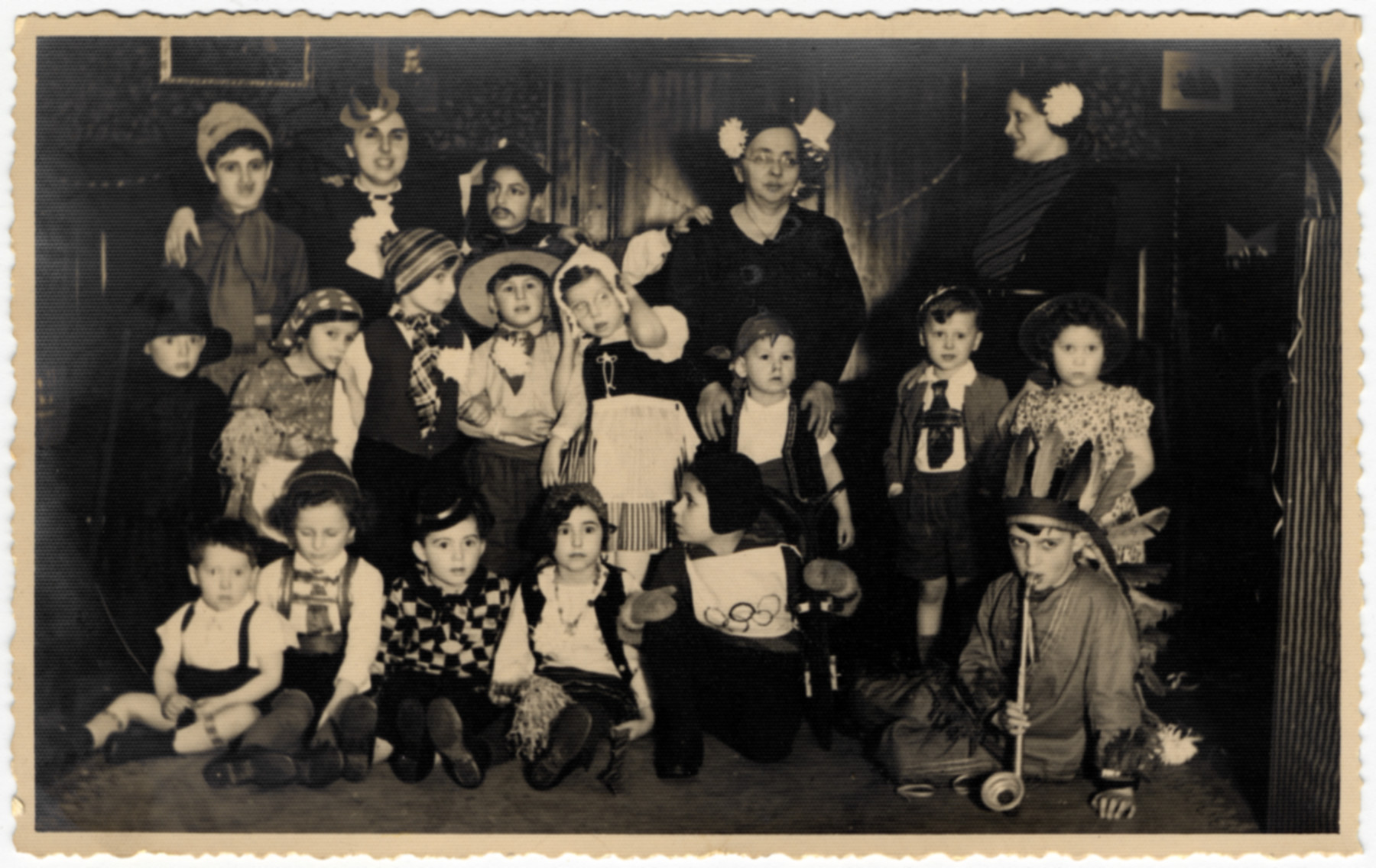 Group portrait of children in the Jewish kindergarten of Ludwigshafen dressed in Purim costumes.

Biography
Richard Weilheimer was born November 21, 1931 in Ludwigshafen, Germany. His parents, Maximilian (Max) Weilheimer (who was secretary of the Jewish Community) and Lilly Wetzler Weilheimer (a former kindergarten teacher and accomplished violinist) married in 1930. Their youngest son Ernst was born in Mannheim on December 11, 1935. Max and Lilly both came from large families. The family was considered upper middle class and was active in the Jewish community. Lilly was the oldest of five children. Her sisters Nelly, Alice and Emmy all emigrated to the United States in the mid-1930s. The Weilheimers observed Shabbat and the Jewish holidays. When the German schools were closed to Jewish students, Richard attended the Jewish school, where his maternal uncle Edgar taught. Richard was also home schooled by his grandfather Salomon Wetzler. The evening of Kristallnacht, the Weilheimers were woken by loud noises. A group of thugs entered the courtyard of their building, and then their apartment. They arrested Max, who was sent to the Dachau concentration camp the next day. Lilly took Richard and Ernst to the nearby apartment of Max’s brothers Sigmund and Ludwig, only to discover that they too had been arrested. She then headed to the synagogue where her father was the cantor, and they found it in flames. They then returned to their apartment and discovered it had been looted. They took some clothing and went to Lilly’s parent’s apartment. Salomon too had been arrested and sent to Dachau. The Wetzler’s neighbor, a Catholic woman, took in Lilly and the boys and hid them in her attic, providing them with food as well as shelter. A week later, Salomon returned home, and Lilly felt it was safe for them to come out of hiding. Five weeks later, Max returned home as well, having been released in part for his service in the German Army during WWI.

After the British and French declared war on Germany, Allied bombers frequently targeted Ludwigshafen, due to its industrial production for the German war effort. The family tried to seek refuge in the cellar during the bombings, but were restricted to a steel cage that was used for storage and designated for Jews only. During one bombing raid, the family was locked in the cage for three days. On October 22, 1940, all the Jews in Ludwigshafen rounded up; each person could take just one suitcase. Salomon stayed behind, because he was in the hospital with bladder cancer, however Lilly’s mother went with them. They were first taken to Mannheim, where they were reunited with other extended family members. After a three day train ride, they arrived in Vichy France, where they were met by members of the American Friends Service Committee (AFSC or Quakers), who provided them with food and water. The Weilheimers and others were then taken to Camp de Gurs. Conditions in the camp were poor, and Lilly wrote to her siblings in the United States hoping to get visas to the United States. The Quakers in Toulouse sent social workers to the camp and provided the internees with food and warm clothing. The Quakers made arrangements in conjunction with OSE to transfer 50 children from the camp and send them to an orphanage in Aspet. Since Lilly was sick, and conditions in the camp were poor, she and Max lobbied for their children to be placed on the list. Eventually 48 children, including Richard and Ernst, were sent to La Maison des Pupilles. It was the last time that any of the children would see their parents. Lilly died in Gurs on July 18, 1941. Max was sent to Drancy and ton March 4, 1943 was transported to Sobibor where he perished.

Upon arrival at the orphanage, the children were quarantined for 30 days. Due to language barriers between the German Jewish children and French administration of the orphanage, the Quakers sent Alice Resch to be their translator and advocate. 9½ year old Richard was assigned the responsibility of being shepherd to the orphanage’s flock of sheep. The children were in contact with their parents, via letters and packages. They attended school, and even had Jewish teachers from neighboring villages who led religious classes and conducted Friday night Shabbat services.

On July 20, 1942, Richard and Ernst sailed on a children's transport sponsored by the Quakers on board the Nyassa. They were greeted in America by Lilly's sisters Nelly and Alice who lived one block from each other. Richard and Ernst each lived with a different aunt but saw each other frequently. Lilly's mother also managed to emigrate to the United States and died a natural death in 1947.