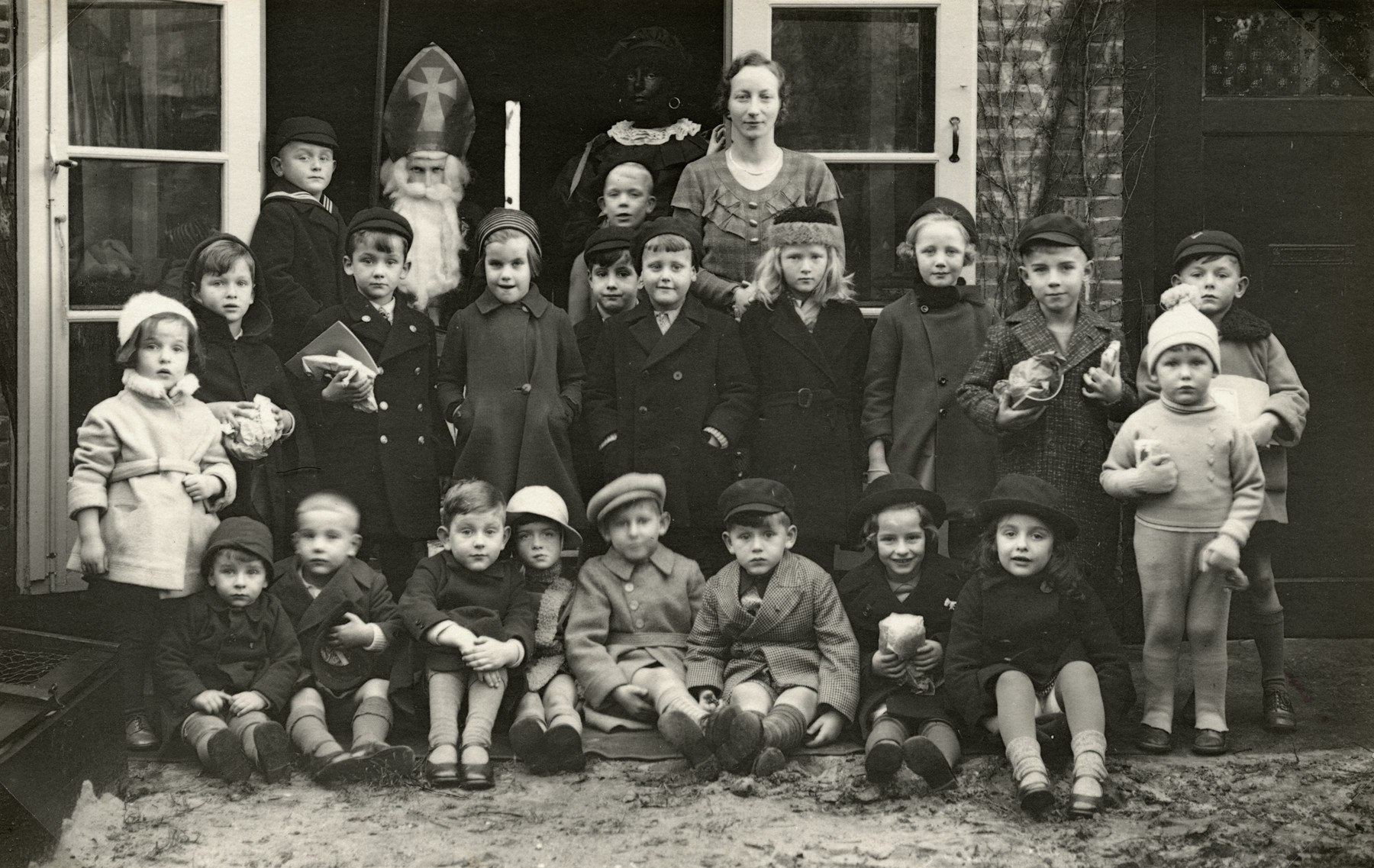 Among those pictured are Henriette Mossel (standing in second row, far left, in white coat), and men wearing the costumes of St. Nicholas and Zwarte Piet.

Biography
Esther Reiss (born Esther Mossel) is the daughter of Joseph and Else (Buchenbacher) Mossel. She was born on July 24, 1938 in Heiloo (near Alkmaar) in The Netherlands, and had two older siblings, Benjamin Moses (b. 10/15/1929) and Henriette (called "Yett" or "Yael," b. 10/29/1931). Joseph (called "Yo") was born 10/15/1897. He and his four younger brothers, Zadok, Jacques, Aaron, and Meyer were the ninth generation of their family to live in Amsterdam. He taught high school mathematics in nearby Alkmaar. Else was one of the first women in the area to graduate from law school. She and Joseph met through the Zionist student youth movement in Amsterdam (ANZO), and were married on 7/26/1928. In the mid-thirties, Yo served on the editorial board of "De Joodsche Wachter," the bi-weekly Zionist newspaper. Together, Yo and Else established the Jewish community (Kehlila) in Alkmaar. In the summer of 1937, they traveled to Palestine to explore the possibility of establishing a high school there in their retirement; however certificates for settlement were few and expensive.
On May 10, 1940, the Nazis invaded The Netherlands. Four days later, Queen Wilhemina and her cabinet fled to England and set up a government in exile. The Germans established a civil administration under Seys Inquart, which gave access to all civil records. Through these records, they were able to easily identify and locate all Jews in the area. Yo and Else tried to escape to England, traveling first to Ymuiden and then to Den-Helder, but by May 15, the ports were closed.
The persecution of the Jewish population in Holland soon followed. On November 4, 1940, all government employees, including school teachers, were required to sign papers declaring that they were of Aryan origin. Those who could not sign were stripped of their posts. Two weeks later, Yo was asked to leave his position. Soon thereafter, Jewish children were forbidden from attending public schools, so Yo taught his son, Ben, and one of his friends at home. By May of 1942, Jews were forced to wear the Star of David, and ordered to move to Amsterdam. Fortunately, Yo and Else had an aunt who lived there, so they were able to stay on one floor of her sizable house.
The forced relocation to Amsterdam rendered inaccurate the precise records previously kept on the locations of Jews . It enabled families to go into hiding, or arrange for their children to stay with non-Jewish families. Yo and Else initially left two-year-old Esther in the country with their maid, Annie Duyfetter. They had apparently impressed upon Esther that she was not to remove her hat, fearing that her dark hair would betray her origins. Still, the wife of a local NSB (Nationaal Socialistische Beweging) member accused Annie of harboring a Jewish child. Annie adamantly denied it, claiming that Esther was her niece from southern Holland, but Esther had to be sent back to her parents. Though non-Jewish neighbors offered to hide the family, Esther's parents declined since they did not want to place their friends' lives in jeopardy. Yo's youngest brother, Meyer, was hidden by Casper ten Boom from May 1943 to February 1944, when they were betrayed. Meyer and several others managed to stay hidden, and were moved to another location, but Ten Boom died after two weeks of interrogation, and his daughters were sent to concentration camps, where only one survived.

In September 1942, deportations to the eastern camps began. By the following spring, Yo's brothers, Aaron and Jacques, had been rounded up and deported, along with their families. On May 26, 1943, Yo, Else, and their children were taken by tram to the Muiderstation, and from there deported to Westerbork, along with his Yo's brother Zadok and his family, and the Birnbaum family. While in Westerbork, Joshua Birnbaum, a refugee from Berlin, met each arriving train to bring any unaccompanied children on board to an orphanage within the camp.
Conditions in Westerbork were relatively good. Esther remembers activities for the children, such as making origami or singing Jewish songs. There was a theater, and artists documented scenes of the camp. Prisoners could receive packages of food from the outside, and were allowed to keep possessions, such as books. Still, they lived under the shadow of regular Tuesday deportations. Yo, Else, and the children stayed in Westerbork until January 11, 1944, when they were transported with 1032 other Jews to Bergen-Belsen. It was one of the first transports from Westerbork to Bergen Belsen, and they travelled in a passenger train, rather than in the cattle cars used later. There, Else worked in the camp kitchen occasionally, while Yo and Zadok worked recycling the shoes of prisoners who had died. Yo and Zadok used that time to teach Hebrew and the Talmud, and other workers increased the speed of their work to cover for them while they taught. Esther's sister, Yett, spent much of the time in the infirmary, ill with tuberculosis. Esther remembers being looked after by the Birnbaum family frequently while there. Unlike at Westerbork, the treatment of prisoners in Bergen Belsen could be brutal. Esther recalls her mother being severely punished by a particularly cruel female guard, who placed her in isolation without food or water for three days.

By 1944, conditions in the camp began to deteriorate. Thousands of prisoners were arriving from other camps, leading to overcrowding, disease, and starvation. Between March 1944 and April 1945, the camp population almost tripled, from 15,000 to 41,000. In August 1944, the Mossel family was told that they would be among a group of 287 Zionists to be sent to Palestine in exchange for a group of orthodox Lutherans who had been living there for many generations. Two hundred twenty-two Zionists were in fact exchanged, but the Mossel family and others were dropped from the list.

By March, 1945, Esther's parents were too ill to care for her, so she was quartered with the Birnbaum family. She watched them surreptitiously make matzos for Passover, on March 29. About a week later, she saw her mother one last time and learned that her father had died on the first day of Passover. The day after she visited her mother, Esther, Ben, and Yett were placed on a train at Celle with two thousand other prisoners. Their mother, too ill to travel, was left behind and did not survive. For thirteen days, the train ran back and forth, between the German and Soviet fronts. By the 22rd, 139 people on the train had died. They were liberated by the Russians on the 23th, near the village of Troebitz. There, Esther, Ben and Yett reunited with their uncle Zadok, Aunt Annie, and their children. Esther was seven years old. She completed Jewish primary school in Holland, an immigrated to Israel with her aunt and uncle on July 11, 1950.